After a flight over, Tube to the Hotel, check in and lunch, we went off and explored some sights. Time to play tourist!

Except that’s not exactly how it went. Fight left late because two people failed to get on board. Their bags had to be removed. Then our rooms weren’t together nor twins as our travel agent had requested. OK no worries, we’re hungry. Lets go eat lunch. Oh and still not enough time? OK lets walk over to the British Museum and see the Rosetta Stone and a few roman things.

We snagged a double decker bus and rode it down to Trafalgar Square Which commemorates the Battle of Trafalgar (1825) and the victory of the British navy over the French and Spanish in the Napoleonic Wars. (Cape Trafalgar is in Spain) then across the square to gaze up at Nelson’s Column which commemorates Admiral Horatio Nelson, who died in the Battle of Trafalgar. Constructed between 1840 – 1843. A granite Corinthian column with four bronze lions at its base added in 1867. 169 feet 3 inches from the base of the pedestal to the top of Nelson’s hat. And hey it’s here, Charles I Statue an equestrian statue cast in bronze in 1638 before the Civil War. The king wears a suit of armour but no helmet. After the war, the statue was supposed to be broken down by a metal smith, but he hid it until after the Restoration. Then off to a really quick National Gallery spin to see a few pieces of art. – founded in 1824. Contains approximately 2300 paintings from 1400 – 1900’s. It is the 4th most visited museum in the world. The current building was built from 1832 – 1838, and the façade facing the square is virtually unchanged since that time. Pretty sure that’s a record for us. Two museums in one day! And on a day where we were supposed to be acclimating to that 8 hour time change. Then because our feet only sorta hurt we walked under Admiralty Arch. Built in 1911. Commissioned by King Edward VII in honour of his mother, Queen Victoria. Housed government offices until recently. May be converted into a hotel. The ceremonial entrance from Trafalgar Square to The Mall (leading to Buckingham Palace and St. James Park). Because it’s now close to dinner we thought we’d swing by Buckingham Palace and see if we could get a dinner invite. Didn’t happen. Buck House is The official London residence and principal workplace of the British monarch. Has been a royal residence here since at least 1705 and possibly longer.

At this point Eric’s feet hurt, Ryan was visibly done and Kris and I were thinking we should quit while we are ahead. So off to dinner at a pizza joint for some awesome wood fired pizza. Short dip in the hotel pool and as I type this Eric is snoring in the next bed. I think we wore ourselves out but good. 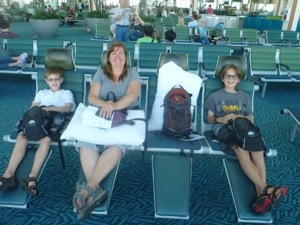