After sleeping in and buffet breakfast of a great selection of wonderful options, we slathered on the sunscreen and by around 930 were off to see what we could see.

We took the tube to Westminster and walked across Westminster Bridge to the London Eye. Erected in 1999 (was originally called the Millenium Wheel). Contains 32 capsules, representing the London Boroughs. Each capsule weighs 10 tonnes and holds 25 people. The wheel moves at 10 inches/second. It is the tallest ferris wheel in Europe. After a healthy 45 minute line we had a crystal clear view of London. Pretty great way to start the day and see what we’d see up close later. Clear skies but not stupid hot was about perfect weather wise. 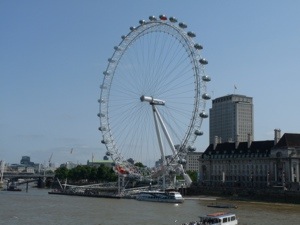 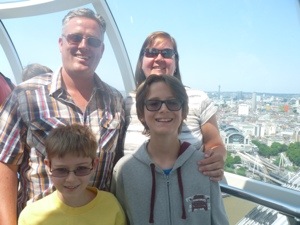 Next it was a quick lunch at some waffle and hot dog place (they are everywhere here) and down the river a bit to snap a couple pictures of Big Ben and Parliament. Such a view. I’ve seen it a couple times and I’m still in awe. The Parliament Buildings are officially the Palace of Westminster. Used to be the primary residence for the Kings of England until partially burned by fire in 1512. Then became the Parliament buildings, the meeting place for the House of Commons and the House of Lords. This ‘second’ building was almost completely destroyed by another fire in 1834. 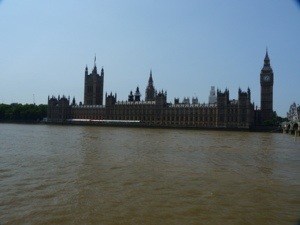 Big Ben is the name for the bell inside the clock inside the newly named “Elizabeth Tower”. Was called the Clock tower, but was changed recently for the Queen’s silver jubilee. Ben is the largest four-faced chiming clock in the world. The hour hands are 9 feet long, the minute hands are 14 feet. The tower is part of the Palace of Westminster and was erected in 1858 after the second fire. It is tilted 9 inches to the north-west. The other end of the Palace is the Victoria Tower (named for that queen’s jubilee). The Victoria Tower contains a fireproof repository for the parliamentary archives. One we were back over the river we wandered down to the Jewel Tower. One of the few surviving sections of the medieval Palace of Westminster. Erected between 1363 – 1366.

And while we’re here we pointed out Westminster Abbey the traditional place of coronation and burial for the English monarchy. The current church was built in Gothic style in 1245 by Henry III (although a church may have stood on the site for up to 600 years prior).

Time to pop back underground and down to Tower Hill to see the Roman Wall and then onto the DLR station. Last time we (Kris and I) the DLR stopped at Island Green and we had to walk the tunnel to Greenwich. This time we did the same but the line has been extended. We wanted to take the Boys and walk through Greenwich foot tunnel.

That got us right by the Cutty Sark (a British clipper ship built in 1869 to ship tea between China and Britain prior to the invention of the steam engine and very nicely restored after it’s fire.) Took the requisite pic and we’re back moving. 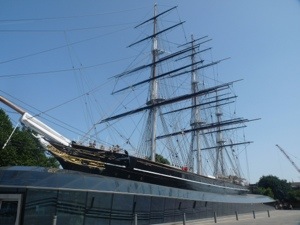 We walked up the hill (King William Walk) to the Observatory and Atomic Clock. The Royal Observatory is the location of the Prime Meridian (the basis of longitude). Commissioned in 1675 by King Charles II. Home of the atomic clock and Greenwich Mean Time. Here, you can stand in both the western and eastern hemispheres! This was the hard part of the day. Our feet were starting to get sore and yet we had a decent up hill climb. And to top it off the atomic clock read out got moved for the Olympics last year but they haven’t got around to moving it back 😦 And to top it off even more the Prime Meridian is now a pay for photo opp. Oh well family rate was only 15 pounds. Ryan got to set his watch to the clock.

Back down the hill, and onto the DLR (Docklands Light Rail) and with a couple line changes we find ourselves out by the Thames Barrier Park. Pretty cool to see how they would manage a flood/storm/tide into London. The Thames Barrier is the world’s second-largest moveable flood barrier. Operational since 1982. Its purpose is to prevent the floodplain of Greater London from being flooded by exceptionally high tides and storm surges. It can be closed (raised) at high tide or opened (lowered) at low tide to help the river flow to the sea. Not sure if it’s been used ever but it sure was shiny and big looking.

Also snagged a distance pic of the Millenium Dome (O2). Built to celebrate the new millennium (year 2000). Each of the 12 hundred meter high yellow supports symbolizes one month in the year, or each hour on the clock. Ryan says it looks like the Death Star partially completed but in white. I had to agree with him. 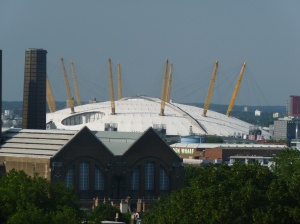 We were supposed to have time to be back at the British Museum but it was around 6ish and it closed at 5. And we’re not done yet. Back onto the DLR, tube to get to Kings Cross. We had to go there. You Harry Potter fans know why. Shame on you if you don’t. Platform 9 3/4 of course. And yes it’s there. Bit touristy and a huge line up for the formal pic. Got a shot guerrilla style.

That and by now it’s around 7 and we’re tired and hungry. Thank goodness for food courts with good food options.

With sore feet and sagging eyelids we finally called it a day and back to the hotel room a mere 11 hours after we left.