Last night we are were a little walking sore. But by morning the boys were back to full energy. Thankfully Kris and I have tea and coffee to help us along. The day started with a walk to Holborn tube then taking bus #15 (Heritage Route) 8 stops to Tower Hill. This got us a few things. One, another double decker ride where we all got the upper front seat 🙂 Two, nice quick tour of The Strand and parts of Fleet Street. And three a driveby view of St Paul’s and how nutsy London traffic is. Everyone jaywalks and traffic is patient but aggressive if that makes any sense. Sort of like Georgia and Burrard during rush hour exept not as wide.

Anyway, a short walk and we’re in the Tower of London. The Tower of London is a complex of several buildings within two concentric rings of defensive walls and a moat. Parts of the royal castle were originally built in 1066 by Saxons and Normans. The White Tower was built by William the Conqueror (the invading Duke of Normandy) in 1078. The tower has been a royal residence, fortress, jail, armoury, treasury, mint and tourist attraction. Busy place. We got there relatively early and the line into the jewels was non existant, yay! And as a special bonus they kindly changed the guard just as we walked up. Great timing on our part. I’d love to say I got some great pics of the jewels but they frown on that. The aforementioned guard had a real and big rifle and I wasn’t going to press the issue. Must say they are very nice indeed. Lots of big diamonds, rubies, saphires and rubies. One diamond is over 500 carats. It’s huge! When we got out from the jewels the line was insanely long. Definitely go early if you’re coming in July. I thought they were cheating when I saw the raven cage but there were some out doing their thing too. 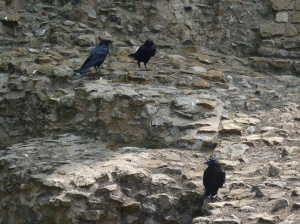 In the White Tower is a bunch of weapons and armour. Ryan seemed particularly interested in this part. Apparently Clash of the Clans (a video game) has taught him parts of armour. Who knew video games are educational??? 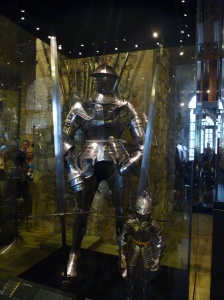 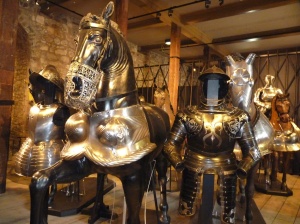 Tower Bridge – built between 1886 – 1894. A combination bascule (the two sections of the roadway open in the middle toward the land on each side) and suspension bridge. I say it looks a lot like the Lego version.

A nice lunch at a french restaurant by St Katherine’s dock. Ryan’s taste in chicken fingers does not extend to the french version. French fries are fine though.

A quick tube to Temple station to see, well the temple of course. Being a bit of a Knights of Templar fan and both Kris and I missing seeing this last time in London this was an important stop for us. Must say the wait was worth it. Nobody there (relatively) and what a simple but beautiful place. The Church was built by the Knights Templar, the order of crusading monks founded to protect pilgrims on their way to and from Jerusalem in the 12th century. The Church is in two parts: the Round and the Chancel. The Round Church was consecrated in 1185 by the patriarch of Jerusalem. It was designed to recall the holiest place in the Crusaders’ world: the circular Church of the Holy Sepulchre in Jerusalem. Not to mention being in Dan Brown’s Da Vinci code. 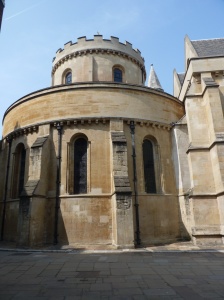 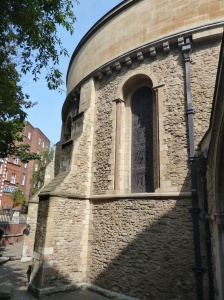 Some knight’s grave stones right in the church itself: 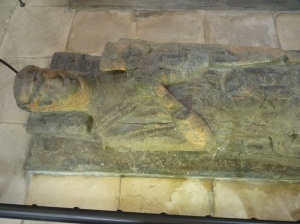 3 tubes later and we’re back at the British Museum. Ryan and Eric both wanted to see the Parthenon. Unfortunately Eric thought the *whole* building was there. He was a little disappointed that it was just parts. The rest of us were impressed.

I can’t remember the name of ths Greek temple but it was amazing to see it rebuilt inside.

Time for dinner at Ciao Bella, good italion food. Finally a quick dip in the pool and off to bed.

Another fun day. And to think the last 3 days were acclimating time and not even our “real” trip. That’s Scotland. Tomorrow we drive north to around Hadrian’s Wall. Driving a manual transmission in London should be fun 😉