First off, the hotel we stayed at makes their own Pisco. As I said yesterday, we tried it at the pool. Kris wasn't a huge fan so we had to smile as our waiter brought us another set of shots as an after dinner gift. This time we both drank ours. I quite like it. Pretty sure Kris will be putting mix in hers whenever possible.

One may be wondering why we'd drive 14 hours (7 each way) to see lines in the dirt. I remember as a kid using my heels and toes to dig canals in the school field, now imagine doing that for 23km in geometric and animal shapes in the desert. 1700 years ago. A series of ancient geoglyphs (most created from 100-300 AD) The Nazca lines are shallow designs made in the ground by removing the reddish surface stones and piling them next to the whitish/grey soil underneath. No one is really sure why or what they are for. Some think they might point toward water and stars or others think they are directions for aliens. Many are just simple geometric shapes. Over 70 are animals such as Hummingbird, Monkey, Whale, Spider, Parrot, Condor, Lizard or human figures such as the Astronaut. Also trees and flowers. The largest are over 200 meters across. Due to the dry, windless, and stable climate of the plateau and its isolation, the lines have been reasonably well preserved. Recent human activity (mining and squatting) have damaged or destroyed some of the minor ones. That's why. 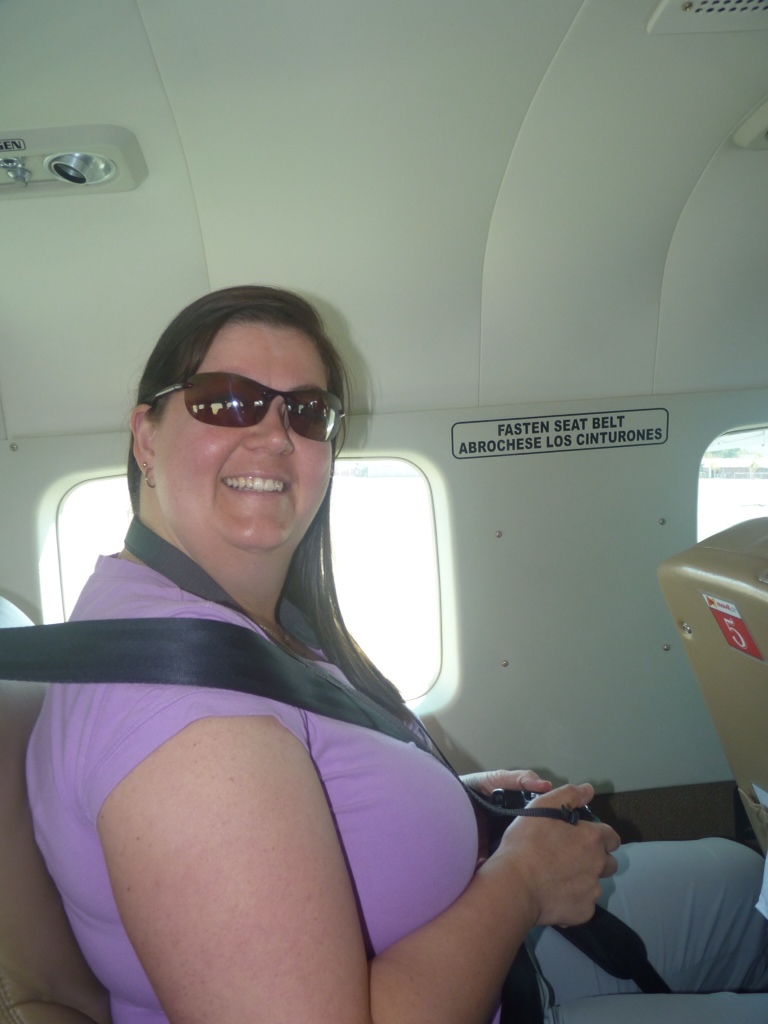 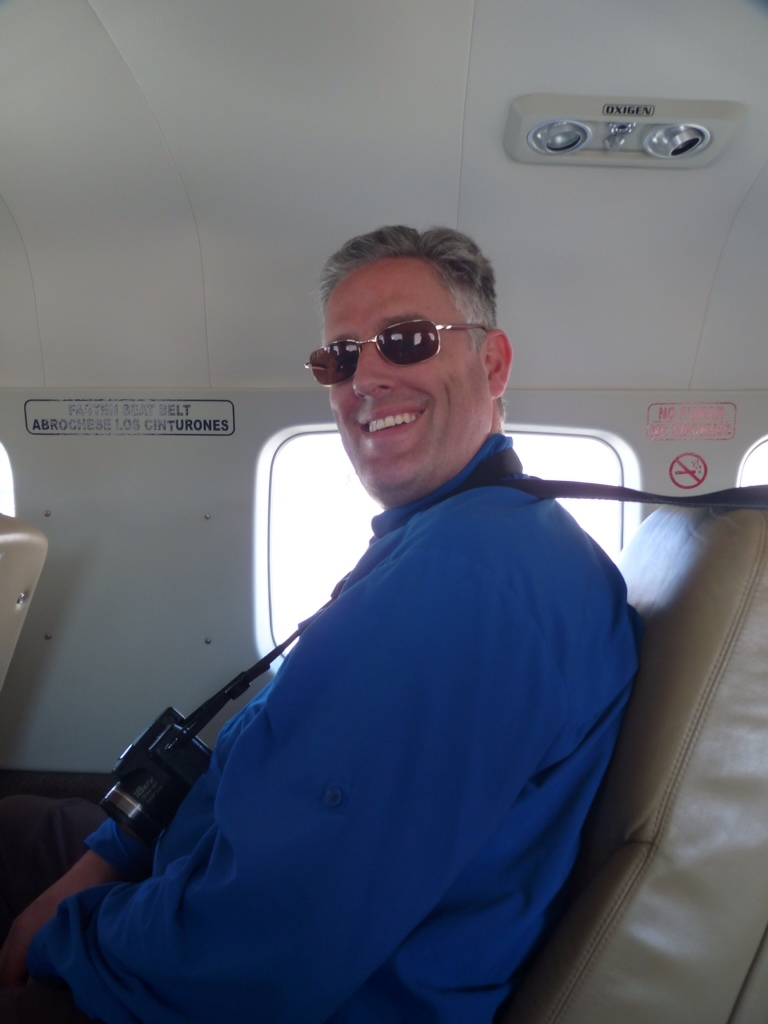 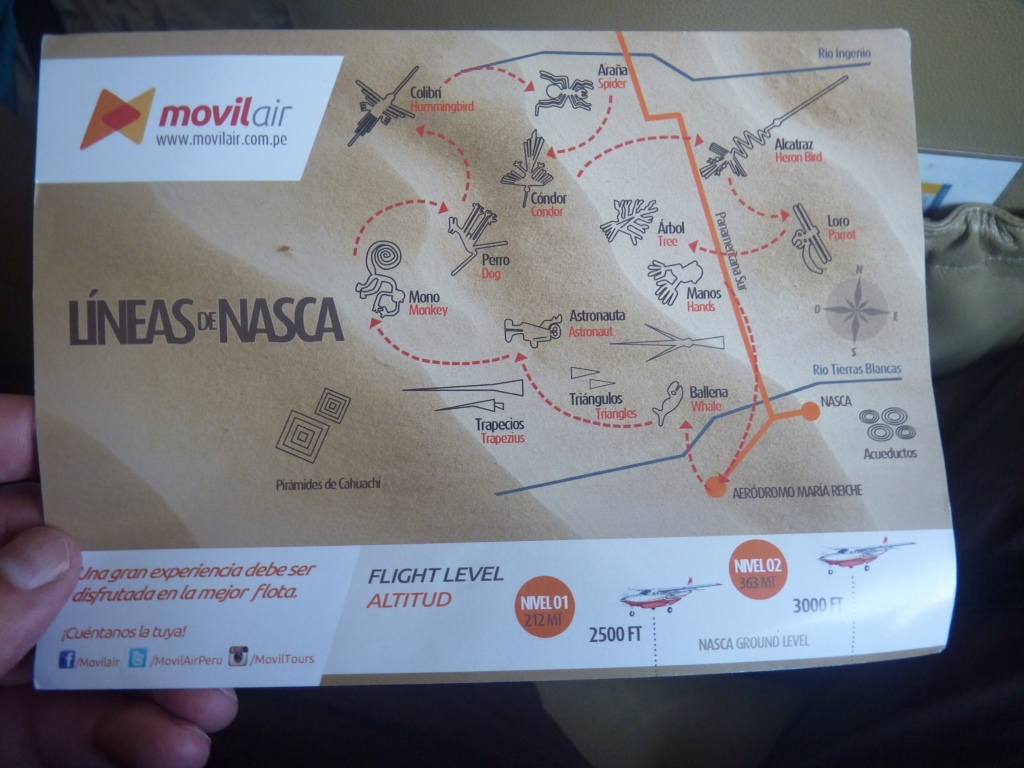 Some shots from the air: 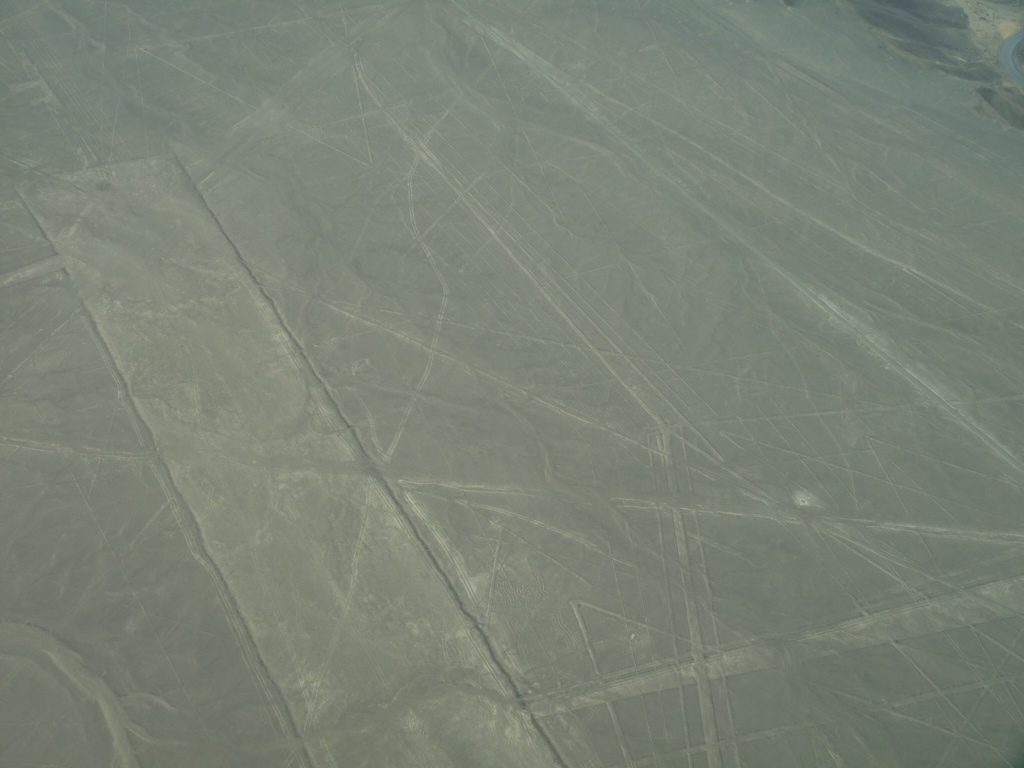 There are lots more shots but I need to crop them and fix the colours. Very cool stuff.

Some more interesting things we saw on the way. Sera Blanco, the highest sand dune in the world. It's not the tallest but it's the highest. It's on top of a mountain. 4.5 hour climb up. We didn't have time. Or really the incliation.

Sand “mountain” way off in the distance from this shot:

On the drive to and from we stopped in Ica. On the way there to pick up Ronnie our guide. On the way back to get fuel. Here is the interesting part. We were dropped at a very nice hotel to pee, while the Christian went to fuel up. No ratty gas station bathrooms for us apparently.

Also on the drive we got to see lots of farms. Asparagus is grown here. But for export mostly. The locals aren't fans. As well we saw potatoes, pecans, peaches, oranges, plums and grapes. We also saw what I was reasonably certain was marijuana. Turns out cotton plants look a lot like marijuana from a distance. It wasn't till later in the drive there some of the cotton was in puff (bloom) so I could match the leaves. Figured it couldn't be, but being from BC I know marijuana is not all that uncommon. Just maybe not beside the main highway and in acre sized lots.

You Ladies may wish to skip this part… We saw Beaver Tail cactus that is host to a beetle. The cactus is farmed. Why you may ask? That beetle is harvested, dried, ground up into powder and sold to cosmetic companies. That expensive red lipstick? The red is beetlejuice. Still want to wear makeup?

As with most developing nations there is a huge disparity in income. The poorest here come down from the mountains to work, they have no money so they squat. It is very common in rural areas to use reed mats and poles as your box hut. Then later when the government grants you title to the land (up to a 5 year wait) you can go to the bank and get a loan for concrete and blocks. Windows and sometimes doors are often non existent. Imagine 5 years in a reed hut with no services like water or electricity. One part of eastern Ica, the Ica city put in a water cistern at the top of the hill for the squatters. Very smart idea. Electricity may come later (or never) but water is precious. Especially in the desert. Others further out dig small pits where a water truck may come around and you pay to fill.

Here is a shot of rural “Home Depot” 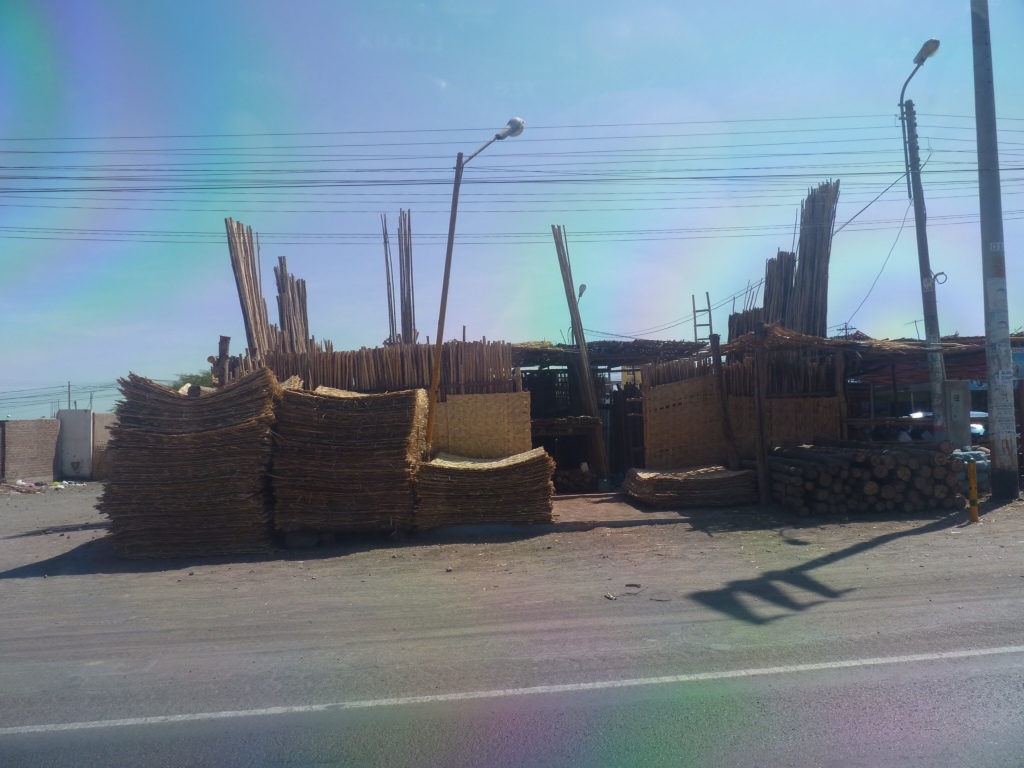 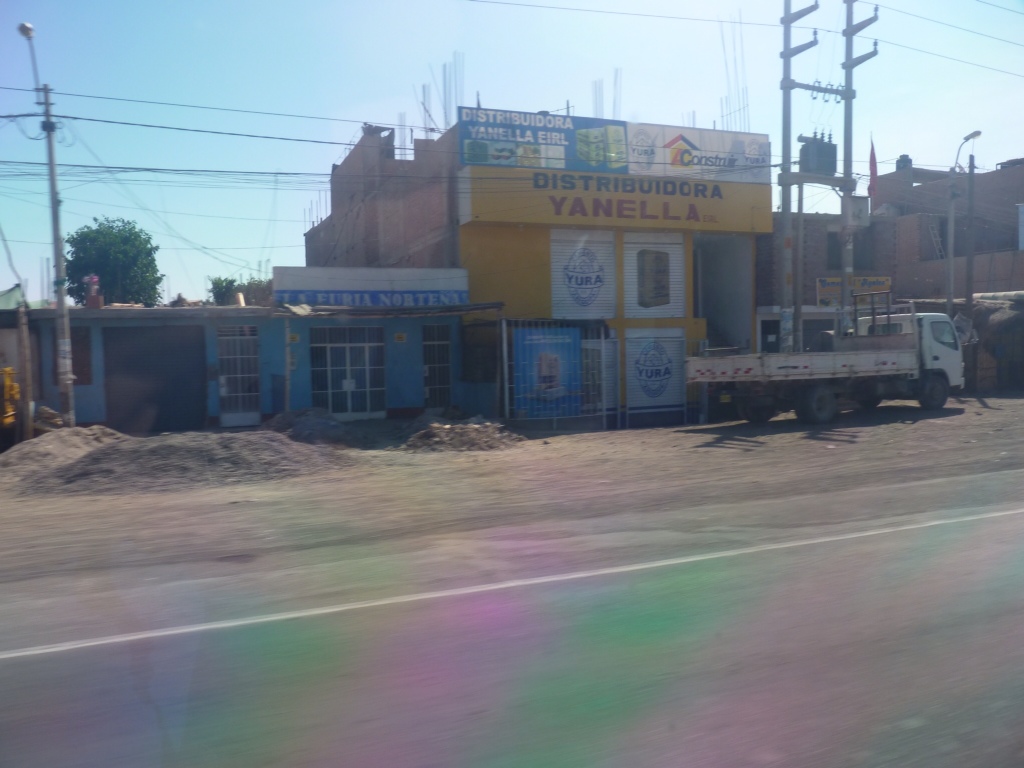 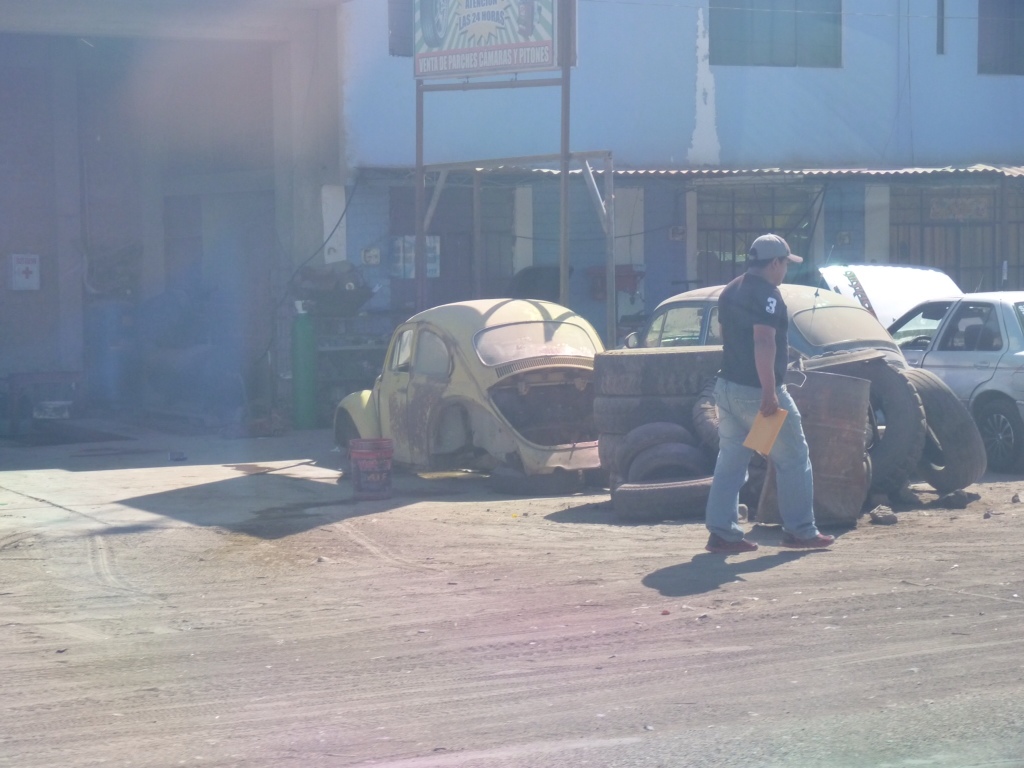 Also seemingly in the middle of the desert are these big black roofed tents. They are chicken farms. They seem to have no power or water or anything so it must be a tough go.

As for the title of today's post it's a two parter. The ish is that our pickup time was to be 915. Then 945 and Christian showed up at 930. You know, ish. Then our flight was supposed to be a morning one. But fog/haze delayed the start of flights. 630 is the start of flying, today 830ish. So our first potential flight time was around 10. We got on the plane at 1. You know, ish. So in the interim we wandered over to the shop stalls. We found what we needed. Yes boys, that means T Shirts. We did eventually fly and it was worth it. Kris did get badly motion sick but it was on her “Bucket List” so she was smiling. The plane was a very new Cessna 208 Grand Caravan. So new that it had a completely glass dash. No old gauges needed. Very nice to fly I'm sure. For those of you regular air travelers you know that the smaller the airport the harsher the security. Well 2 gates total and they inspected our passports (we didn't even leave the city limits of Nazca in the air) and Kris' bra underwire set the security scanner off.

The first part of the title is that in the 80's the Shining Path were very active in the area. As such the government of the day put in a major Air Force base. Ergo now that the Shining Path are long gone, we tourists get to use the airport as a base to fly over the lines. Sometimes military infrastructure is a good thing. Since it was now close to 2pm we desparately needed lunch. Mamashama was the place according to Bradley our guide. He was right. Very tasty. I had the Tallarin Saltado (beef, onions and tomatos sauteed in spicy sauce with spaghetti noodles) and Kris had Aji de Gallina (chicken with potato and yellow cheese pepper sauce).

Also while waiting for our plane we got Christian to take us into downtown Nazca with Brady to the Claro store. Once Brady translated our needs to the nice lady behind the counter, my Celular Data was up and running. Yay.

After all that is was time to drive back to Lima. Seven hours later we arrived back at the same hotel as first in Lima.

We are off to Puno bright and early tomorrow. Going to see Taquile the floating island.