Today was a lovely 9am start for a tour of Cusco (Qosqo). We went straight up to Sacsayhuaman. Which translates as city of stone. Many of the stones used to build the cathedral were taken from this archaeological site (the walls were probably at least 10 feet higher). Stone walls (limestone, diorite and andesite) showcase the Inca masonry skills. At the end of the Incan Empire it was a massive military compound with but before it really was a site of religious significance. Said to be the head of the puma with the zig zagged walls its teeth. The parapets could house up to 10,000 soldiers. Built in 1440’s during the reign of Pachacutec. The outer walls are still mostly intact and there remains about 1/5 of the original complex after the Spanish ransacked it. The doorways in the bastions are trapezoidal and have names (T’iopunku, Ajawanapunku and Wiracochapunku). The parade grounds (explanada) are still used for the festival of Inti Raymi at the winter solstice. 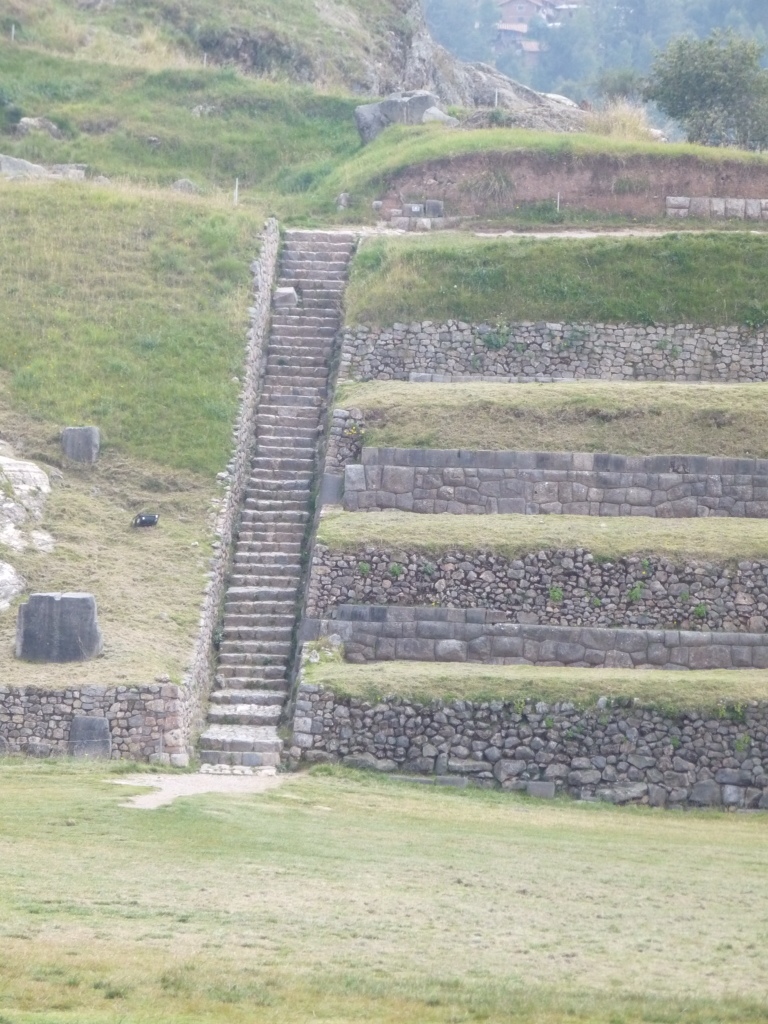 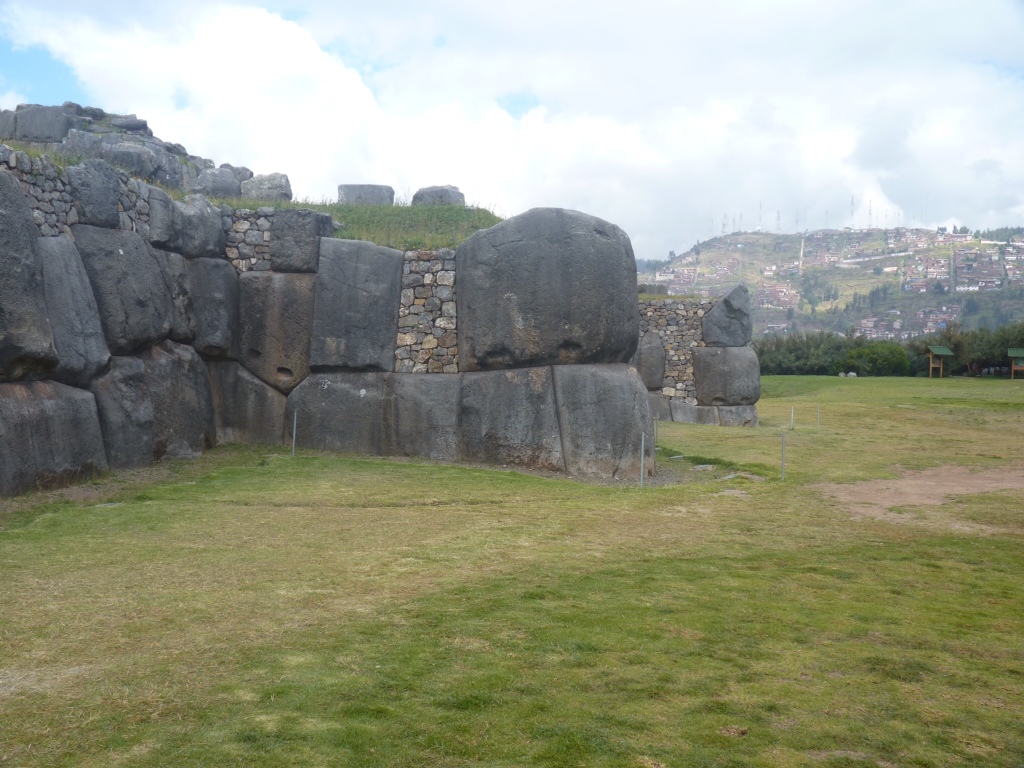 Some of these stones are close to 90 tons. Here is a photo with Kris to show the scale: 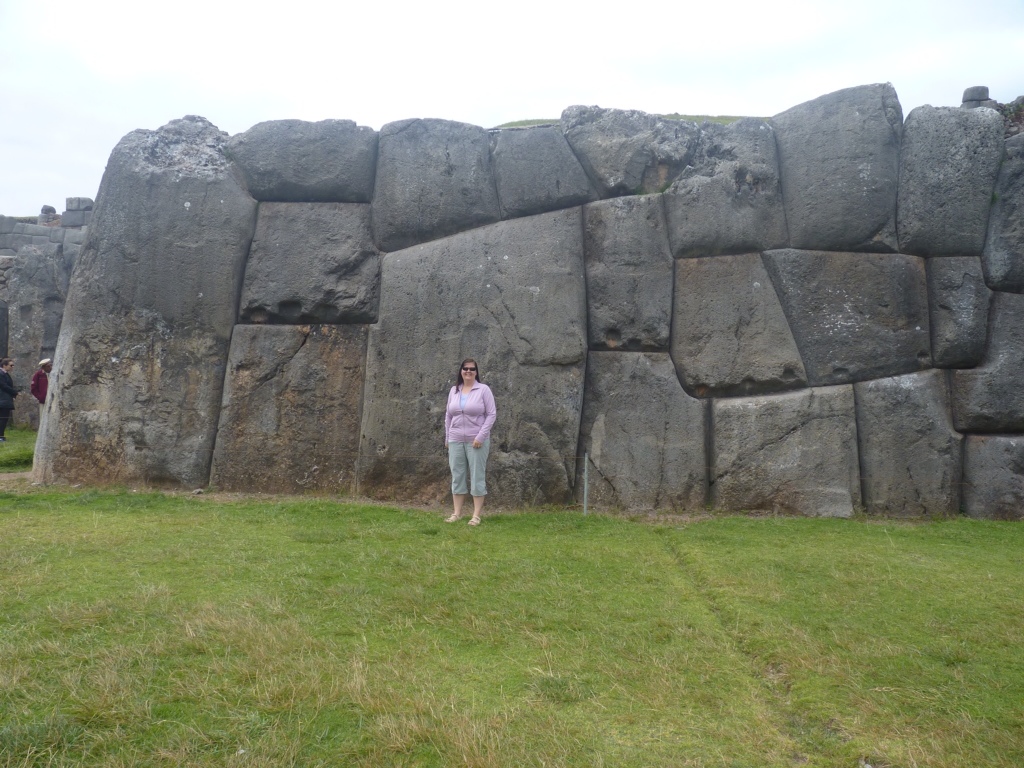 No mortar is used, they are held together by shaping the rock. 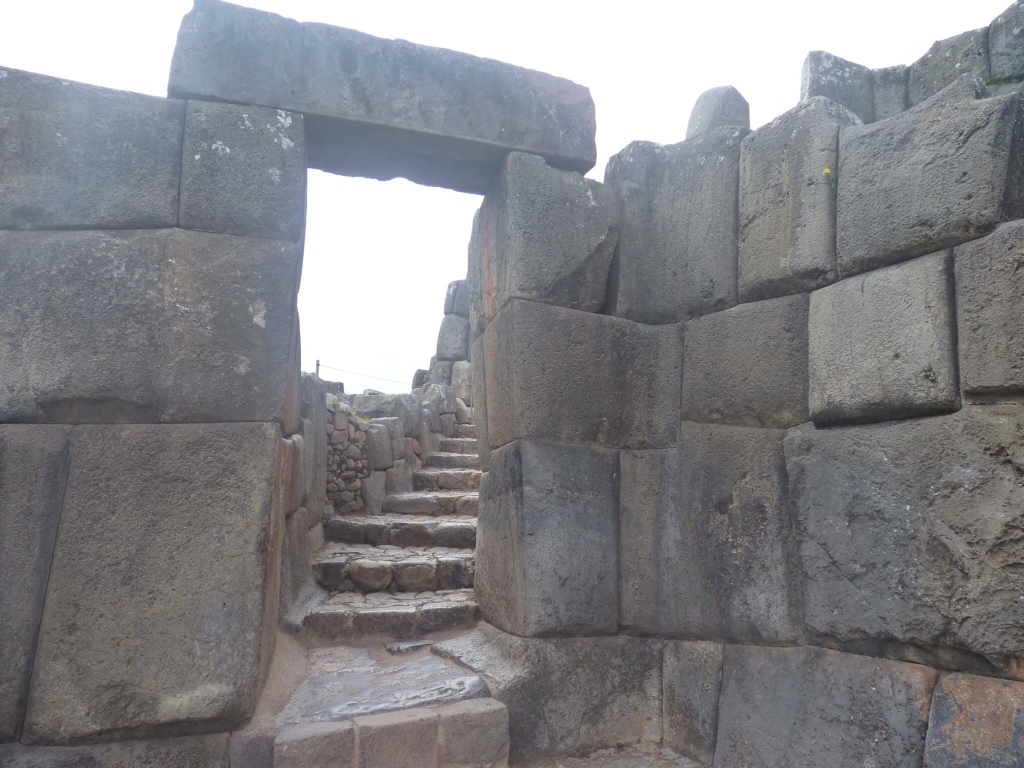 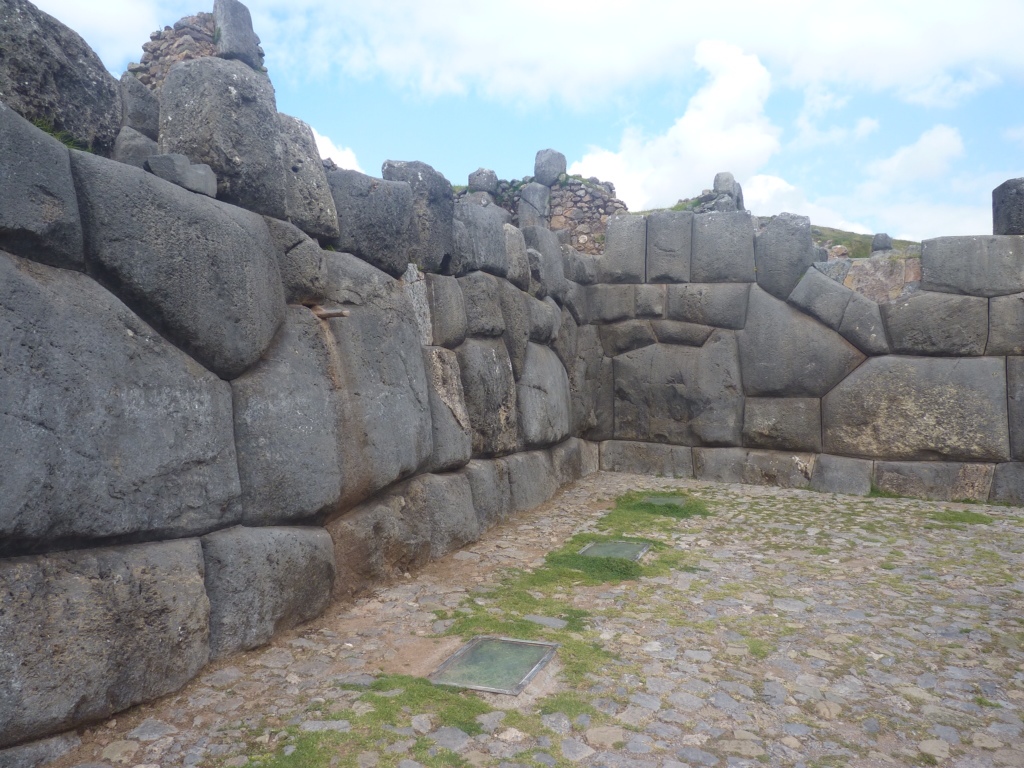 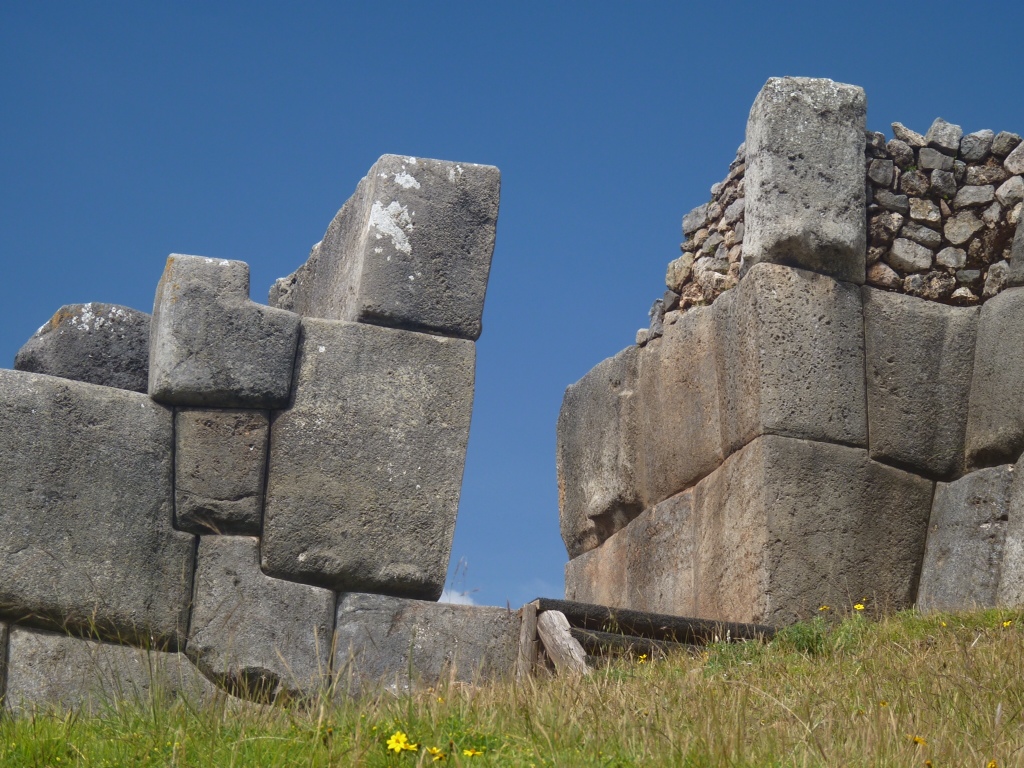 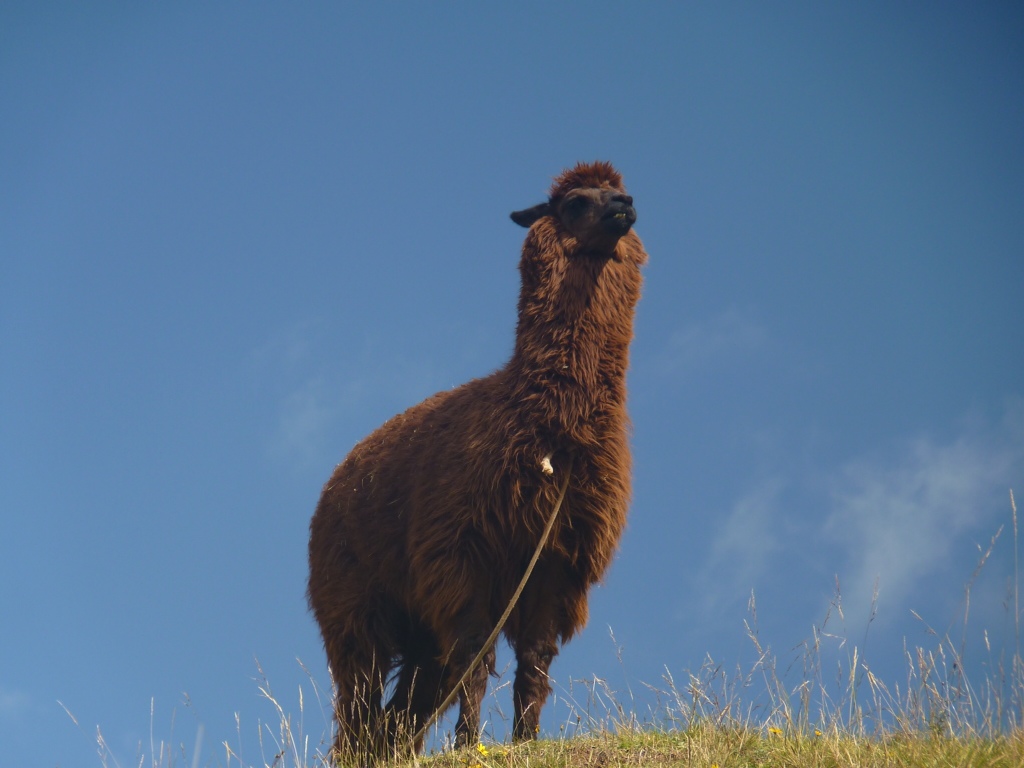 Of course there is the local merchants looking to sell. Another place for a cool photo.

We also visited Tambomachay. Tambo meaning place of rest and machay being the King. It's just up the trail from Sacsayhuaman on the way to Machu Picchu. I think. That part was a bit confusing. 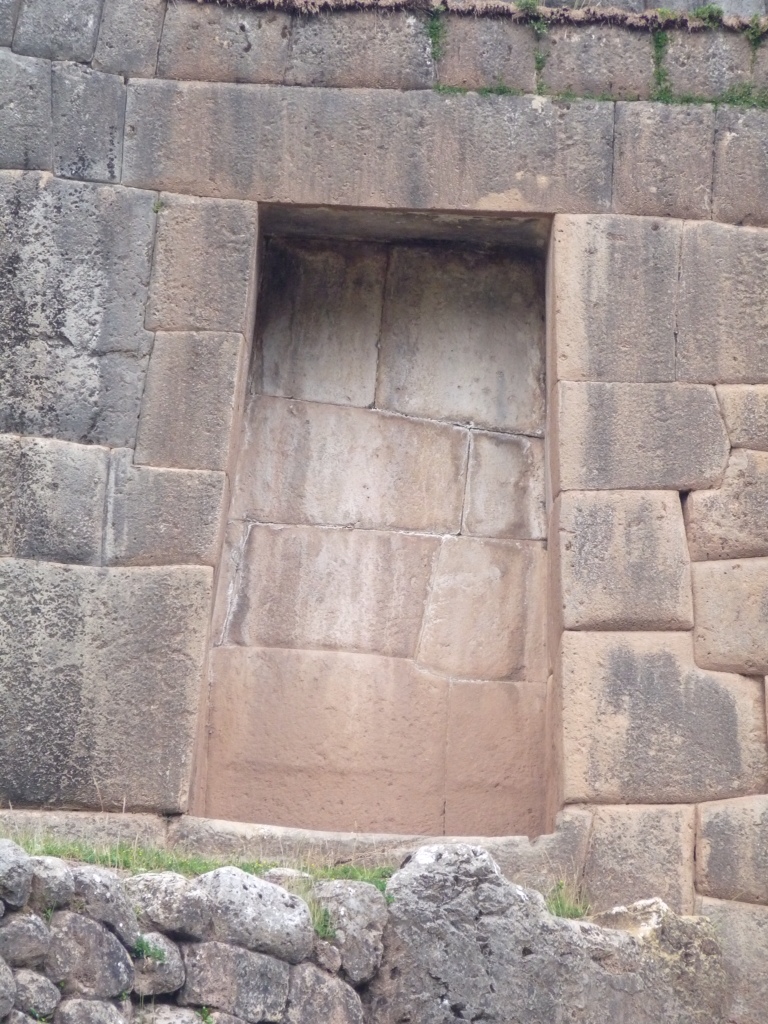 Requisite tourist shot. This time it was my turn:

Then to Pukapukara which is close and was a messenger station and control point.

Q'enqo was a place for embalming ceremonies. There is a cave that was carved out where it was cooler and therefore the bodies would last longer while being prepared. Morgues are always in the basement right? 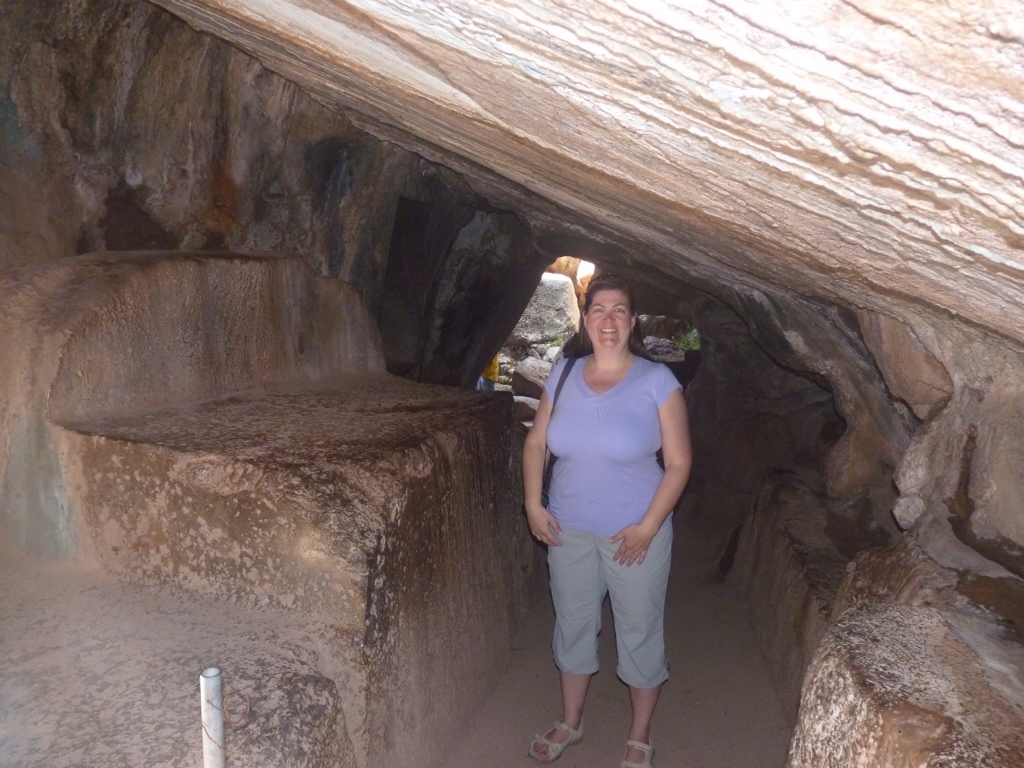 Then on our way out we met the king.

Every Catholic church was built by the Spanish over an old temple, or huaca. Thus, there can be an odd mix of imperial and colonial architectures.

We walked down the narrow stairs of Hatun Rumiyoc Street – very narrow and lined with the old walls of the Inca Roca Palace. Halfway down Hatun Rumiyoc, along the palace wall is the famous 12-angled stone, an example of the amazing masonry skills of the Inca.

Museo de Pisco is place dedicated to Pisco. Kris had a Chollopotan which is a Cosmo with Pisco, how could she not? I had one that had some chicha flavoured pisco. Both were good but since we hadn't had lunch yet and it was hot, they hit us fairly hard. Thank goodness this was on the way to lunch.

Not our Pisco Sours but a good example of some. 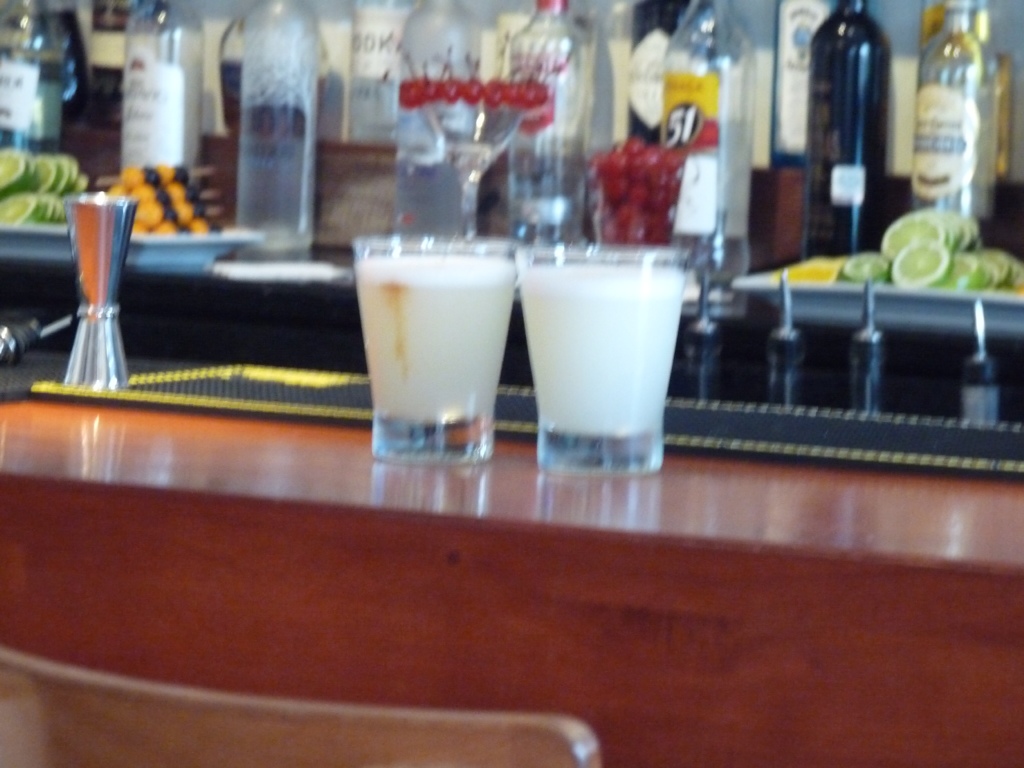 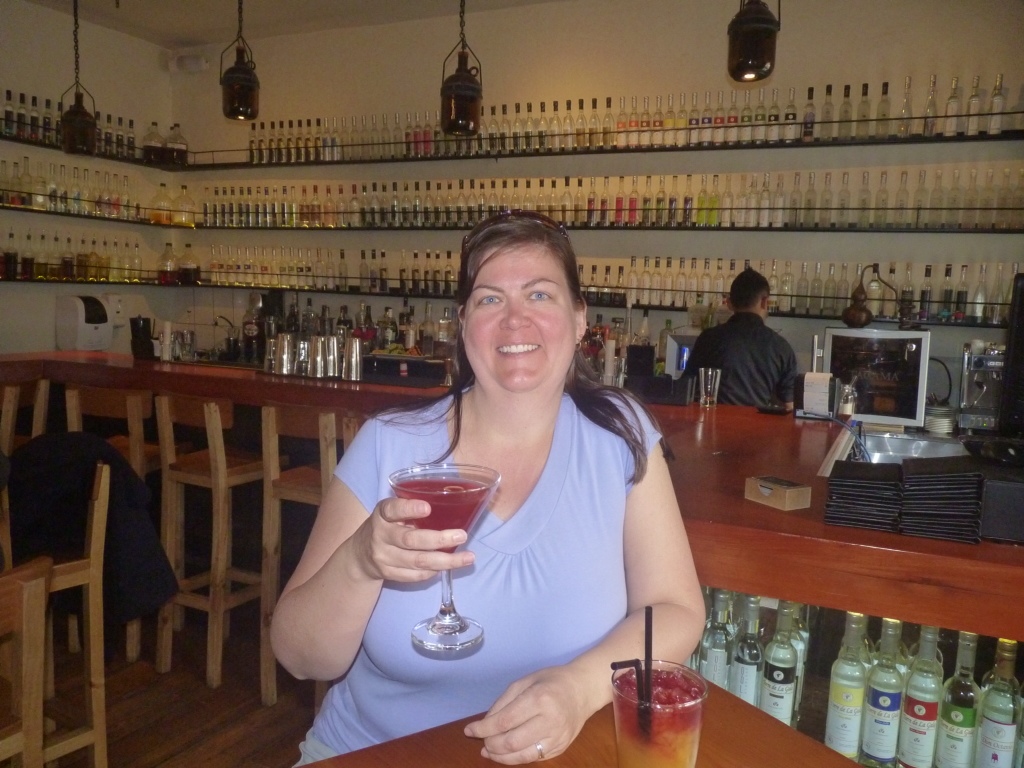 Lunch was at Granja Heidi is a crepe place run by a German lady, who we assume is Gramma Heidi.

Convento de Santa Catalina – an active Dominican convent. The church dates from 1610, but is built on the site of the original Acllawasi. Acllawasi is the name of the house of the Inca chosen women. Around 3000 women lived here who were responsible for teaching, weaving Inca ceremonial robes and service to the sun.

We then walked down Santa Catalina Angosta street which turns into Arequipa street – check out the sign: Q’Aphchijk’ijllu 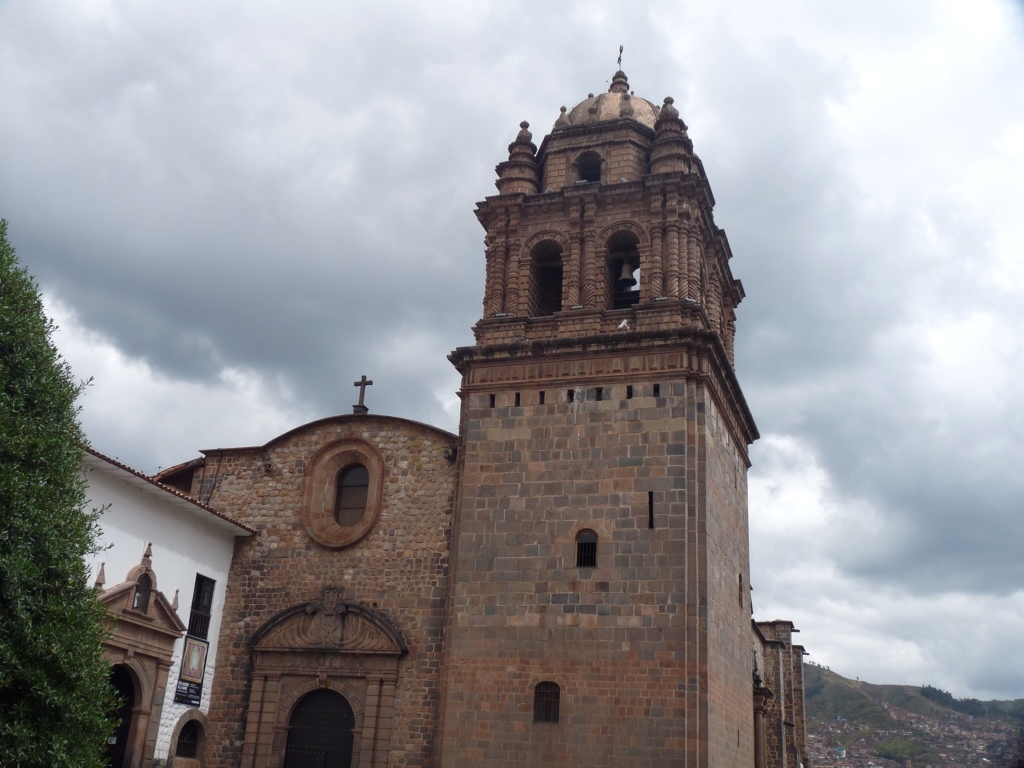 Plaza de Armas (Haukaypata)– Pretty fountain in the centre of the square.

Cathedral of Santo Domingo is on the northeast side of the plaza. Built on the foundations of the old Palace of Inca Wirachocha (the church was dedicated to the Inca god) in 1550. Two towers with wide expanse between.

Also this is where Starbucks is. We stopped if only to say we did.

Qorikancha – was the Incan Temple of the Sun until the Spanish built the Church of Santo Domingo on top of the foundations. Temple was built during the reign of Pachacutec to honor an important divinity, and as an astronomical observatory and a repository for gold treasure (most of which the Spanish had melted down and sent back to Spain). It represents the loins of the puma, the centre of creation. The Qorikancha housed 4000 priests and attendants. In the centre used to be a great gold disc that reflected the sun and bathed the temple in light. About 40% of the original temple can still be seen with the colonial-era church on top. And we couldn't take photos of much of anything 😦

Dinner was the experience night. If you have Guinea Pigs at home you may to skip this part. Diva is a restaurant that does local. Local can mean Alpaca and Cuy (the aforementioned Guinea Pigs). There are a few places to choose from but this place shows you how they prepare the Cuy. They also server Chicha Jurra or corn beer. Tastes fairly bad and smells like an old dirty bar or club. Not something we'll repeat. I had the Alpaca because one spit on me and I'm getting even. Kris had the cuy. Tasted like dark meat chicken and was mostly skin and bone.

It's fried and held down by a stone – the middle pan in this shot. 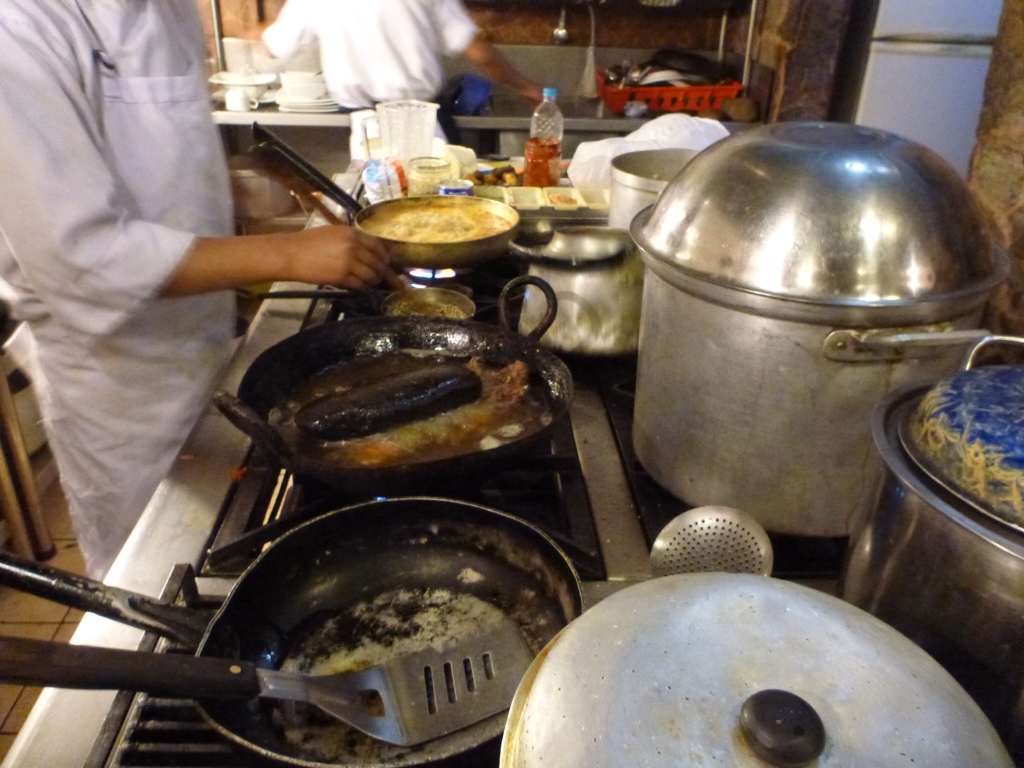 Here Kris is thinking “Did I really order this?”

After an interesting dinner we walked back to the hotel and saw the Qorikancha lit up.

Tomorrow we're off on the train to Machu Picchu.