Today was a catch up day. We knew our Rome schedule was a tight one, especially the first day. We had the extra day in vacation days, so we put the buffer time in at the end. I'm glad we did as we didn't get everything done on the first day in Rome. It was too hot and we were too jet lagged.

We took the Metro back to Colosseo station, which as it may sound, is the Coliseum one. Same place we started at the beginning of the trip.

It was a hot today, and the sun beat down on us. 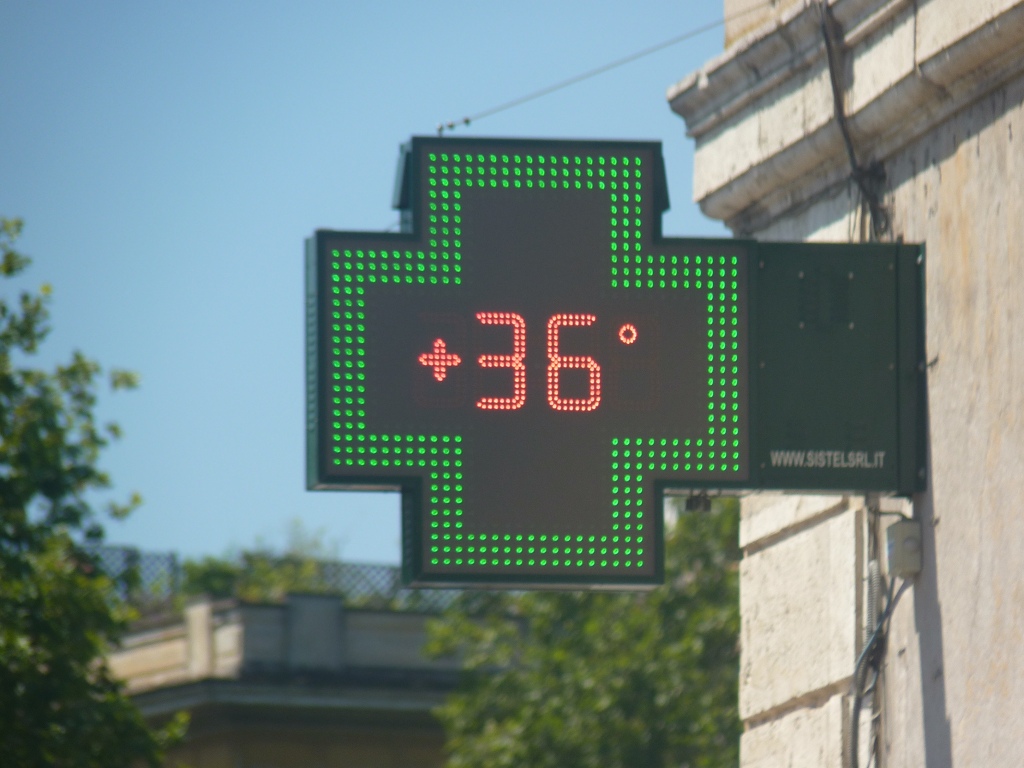 From there we walked over to Trajan’s Column. It is 38 meters high, and was completed in 311. Commemorates Emperor Trajan’s victory in the Dacian Wars (current day eastern Europe) in the early 100’s. From a distance it looks old and worn out, up close you can tell it's actually carved all the way up.

Right there are also the so called twin churches. The Church of the Most Holy Name of Mary built 1741 – 1751 and the Church of Santa Maria di Loreto built 1507 – 1582 which is the more colourful of the two. 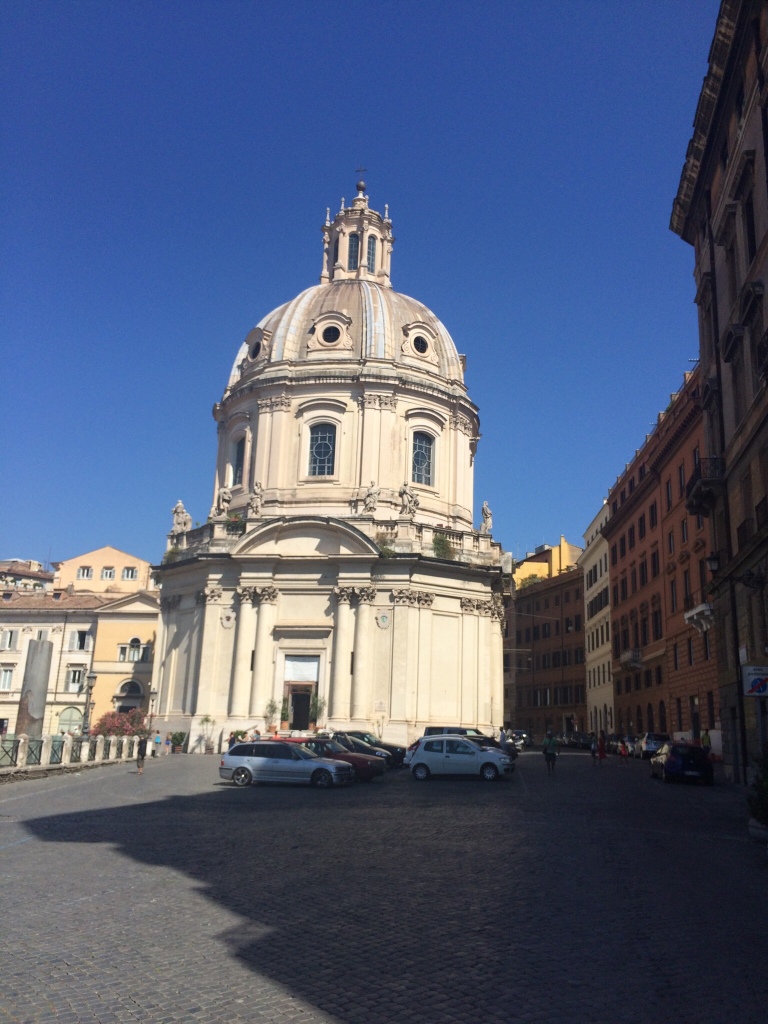 You can see the second church behind Trajan's Column. 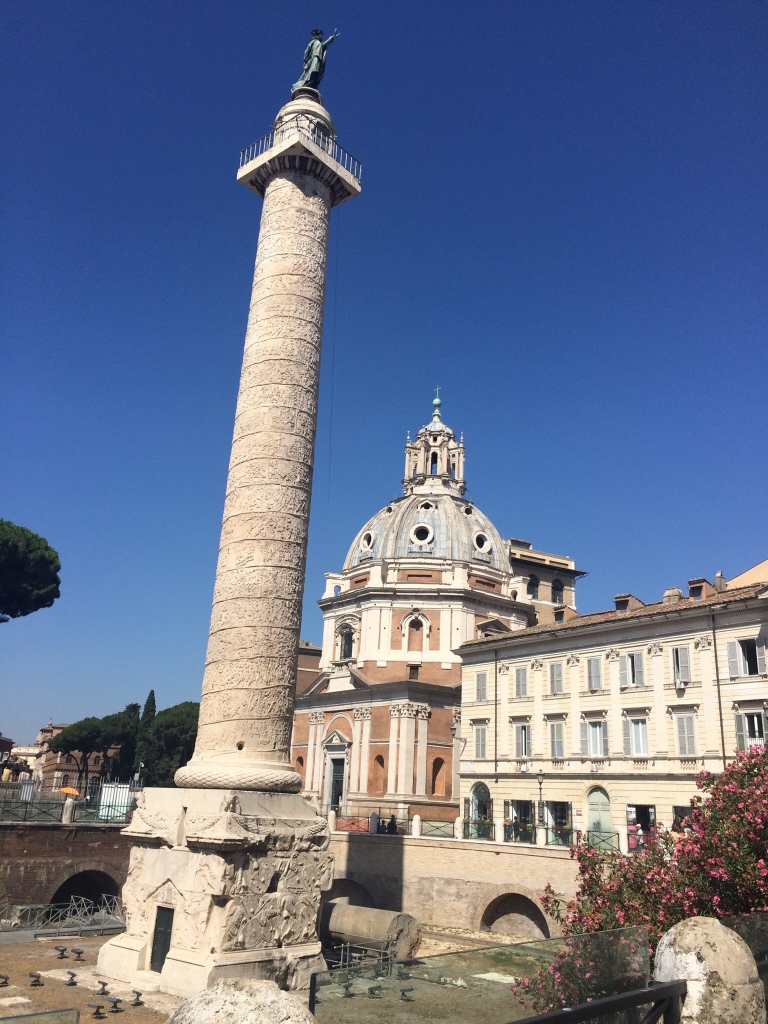 Then, right next door to them, is Altare della Patria (Altar of the Fatherland). The Monument of Vittorio Emanuele II, the first king of a unified Italy. He had been King of Sardinia, and became King of Italy in 1861. The edifice has been nicknamed “the wedding cake” or “the typewriter” because of its fancy appearance with lots of columns. Built between 1885 – 1911. 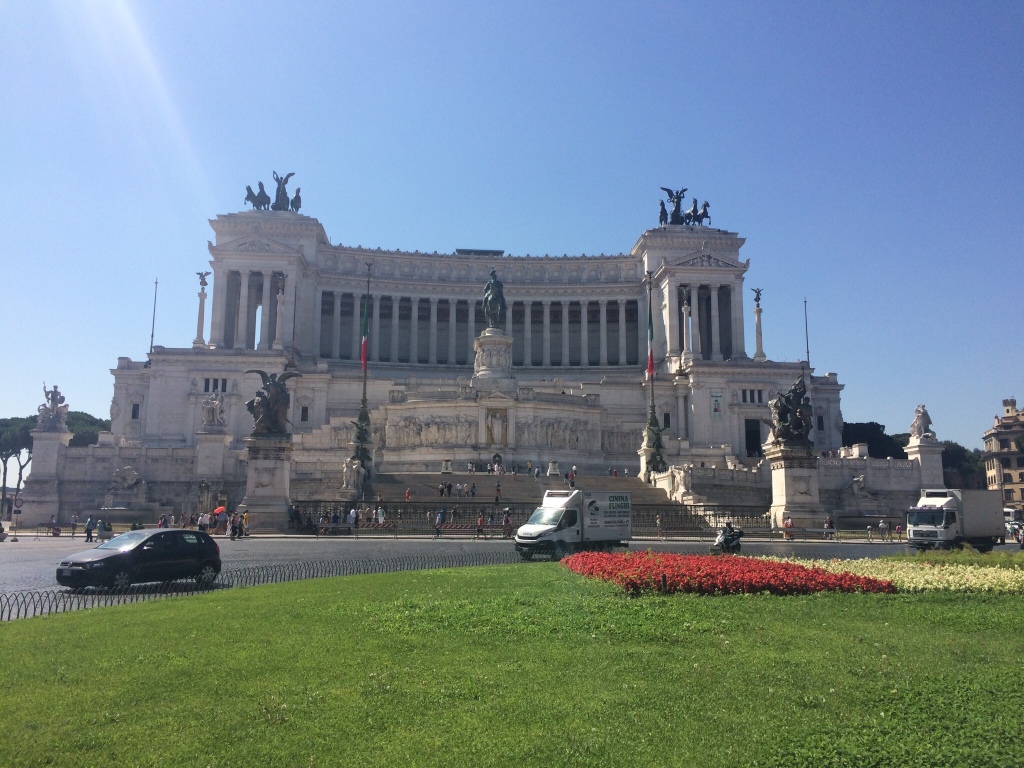 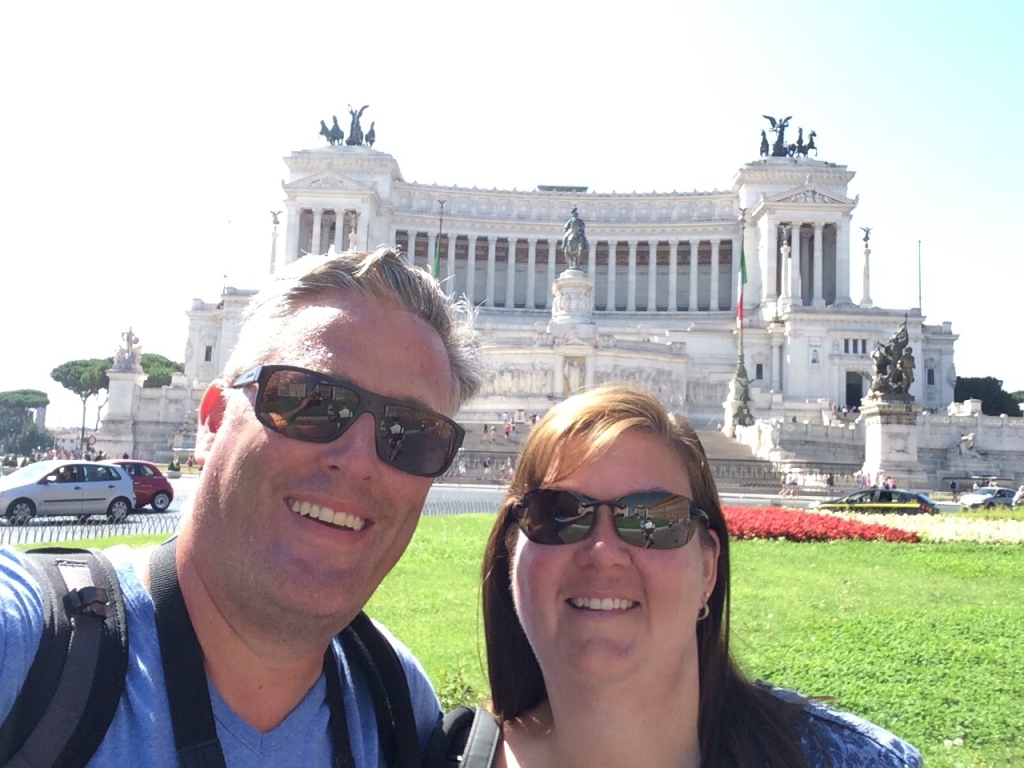 Just down the block is the Santa Maria in Aracoeli. The designated Church of the city council of Rome, high on the Capitoline hill. Built in the 12th century. Said to have been built on the site of a temple to Juno. For Assasin's Creed fans (Ryan) Ezio stored his Apple of Eden in the church vault. It is really plain and boring on the outside with a crazy amount of steps UP. But inside: 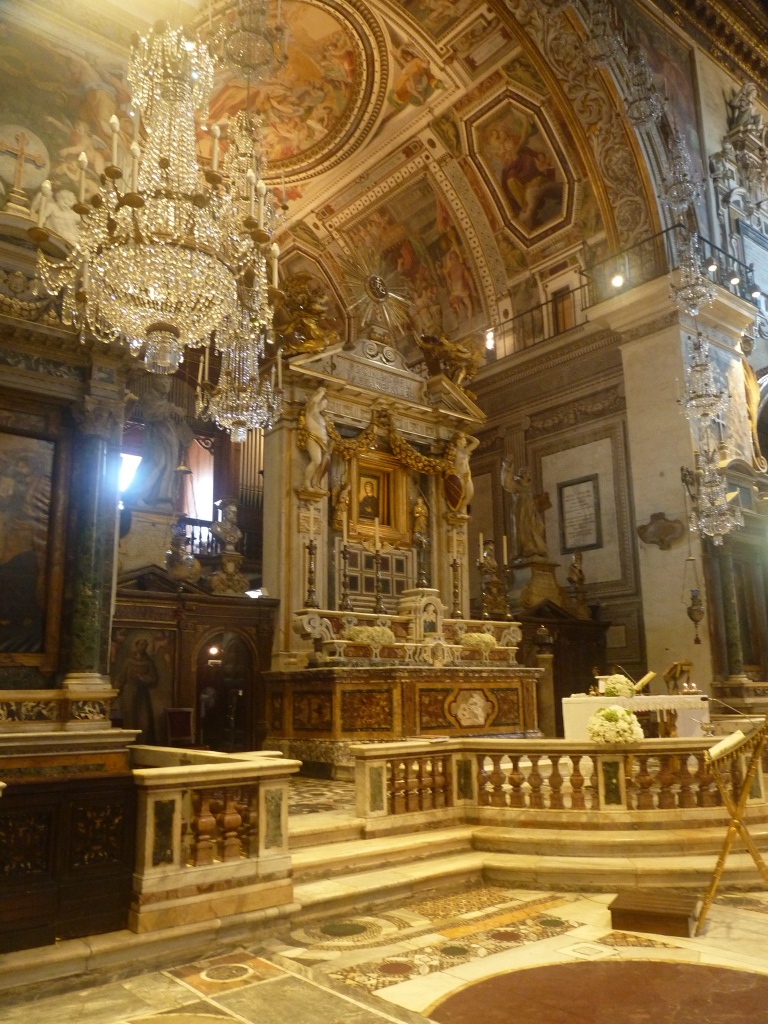 We didn't stay long as there was a wedding about to start. Poor bride had to climb up 124 or so steps in a wedding dress.
Continuing down the block we found the Piazza del Campidoglio. A square designed by Michelangelo. The two basalt lions flanking the cordonata (stairscase) are authentic Egyptian statues. They needed a bit of a wash. Birds had done their thing. 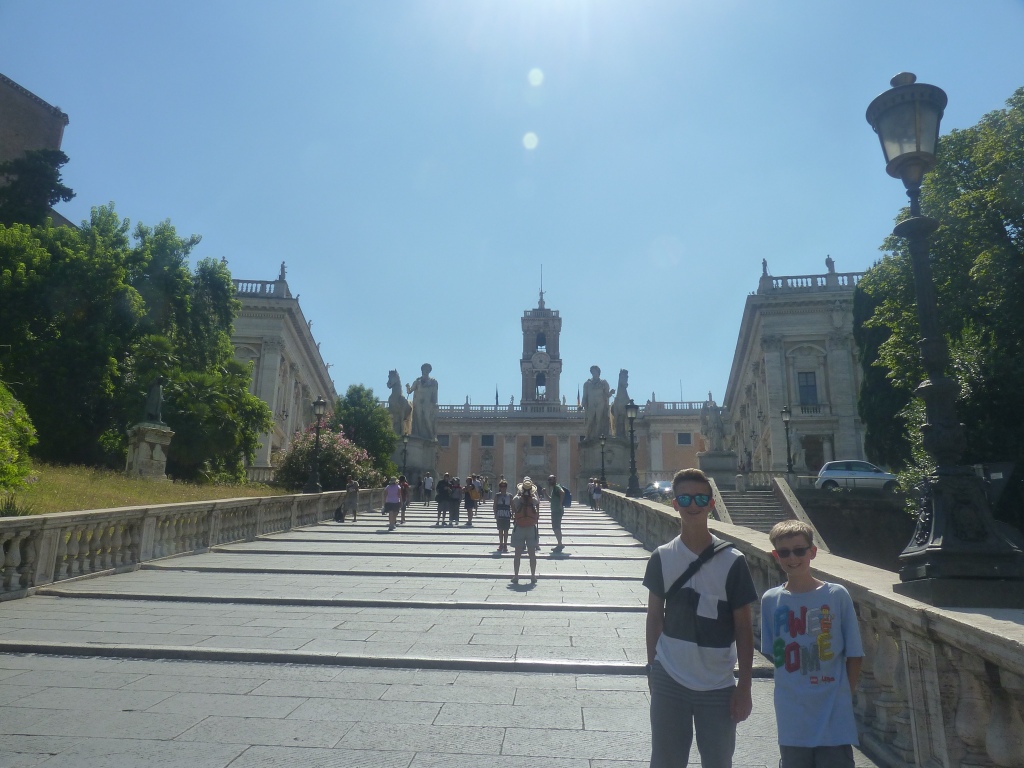 Statues of Castor and Pollux (Dioscuri) are at the top of the stairs.
The equestrian statue of Roman Emperor Marcus Aurelius might have been destroyed as ‘pagan’ but it was misidentified for years as the Christian Emperor Constantine.

The clocktower belongs to the Palazzo Senatorio at the back of the square.

The statues on either side of the large staircase of represent the Nile (left) and the Tiber (right). Statue of the goddess Minerva in the central niche has been modified to symbolize Roma.

Down the road a bit is the Theater of Marcellus, started by Julius Caesar and finished by emperor Augustus in 13 BC, dedicated to his nephew Marcellus who died young. A semi-circular, travertine limestone, free standing arena that could hold 15,000 spectators. Used as a fortress in the 13th century AD. Looks like a mini colosseum but now with a building on top. Reduce, Reuse, Recycle right? 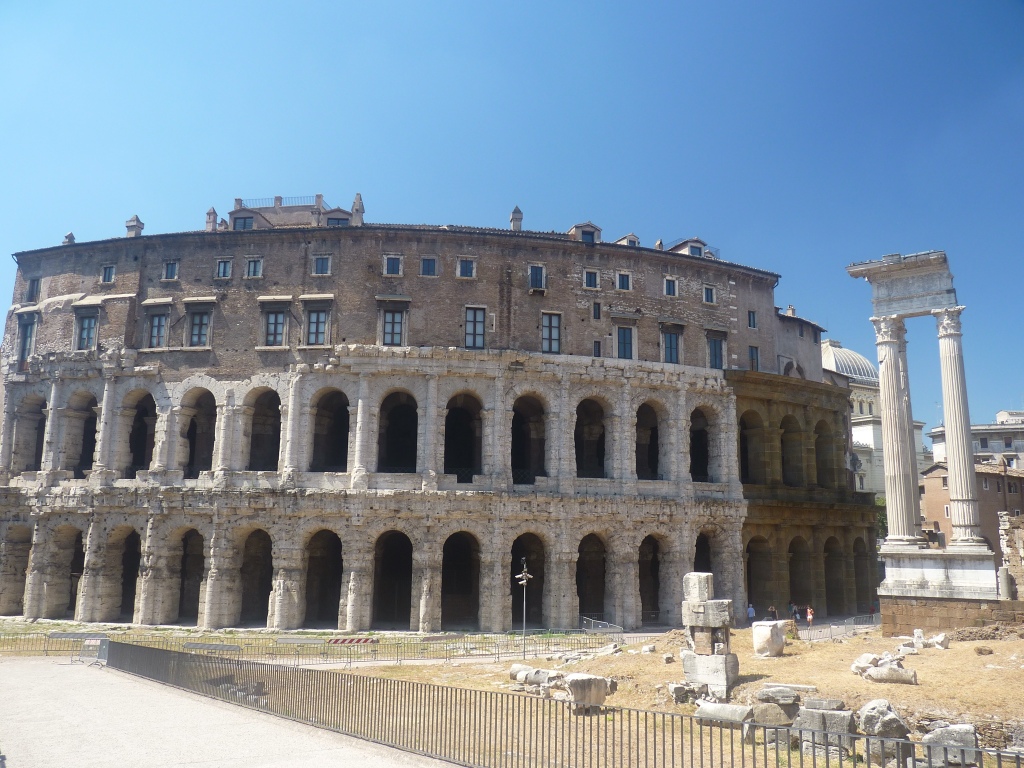 Built beside a temple to Apollo from 34 BC and all that is left is three columns in front. 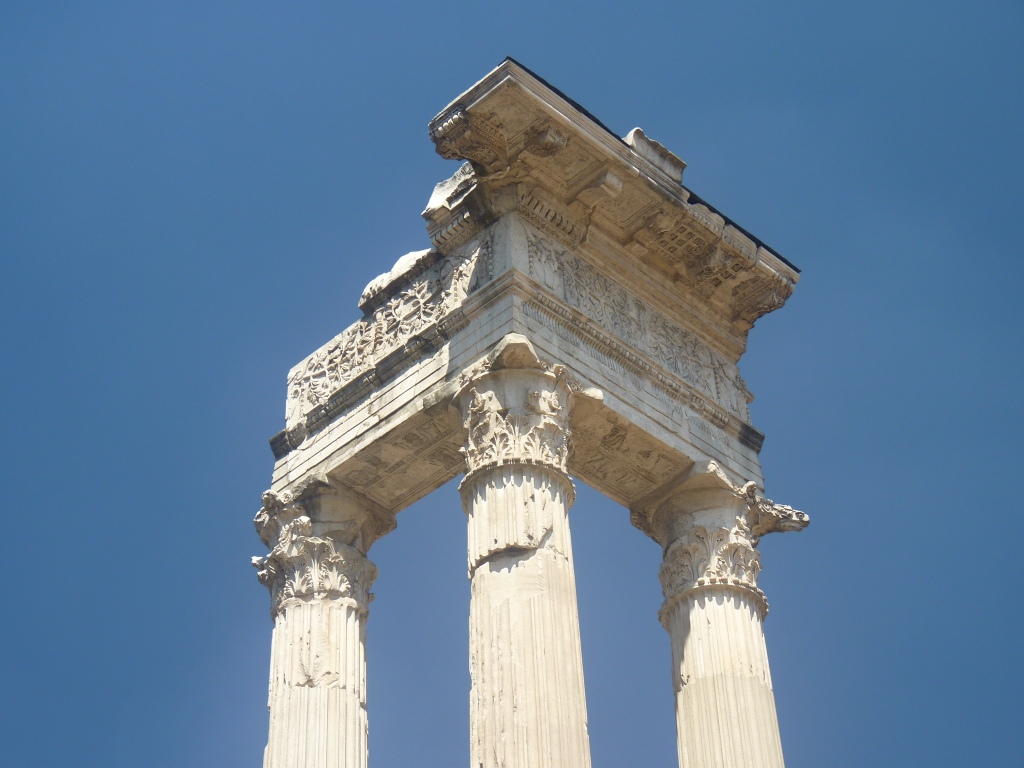 Tiber Island (Isola Tiberina) is the only island in the Tiber River. Boat shaped and connected to both sides of the mainland by bridges. Associated with medicine and healing as it is the site of an ancient temple to Aesculapius, the god of medicine, and later a hospital. The hospital was founded in 1584 and is still operating today. Legend says after the fall of the hated tyrant, Tarquinius Superbus, in 510 BC, angry Romans threw his body into the Tiber, where silt formed around it and became the island. In Assasin's Creed it was also the headquarters for the Assassin Order in Rome and Ezio’s base of operations in his war against the Borgias.

Since we were here and we were hungry we decided it was also time for lunch. We had a great meal on the island in a small restaurant. They had good food, wifi and perhaps most importantly AC.

After lunch we looked down river at the Ponte Rotto, which is the oldest bridge in Rome. From the second century. 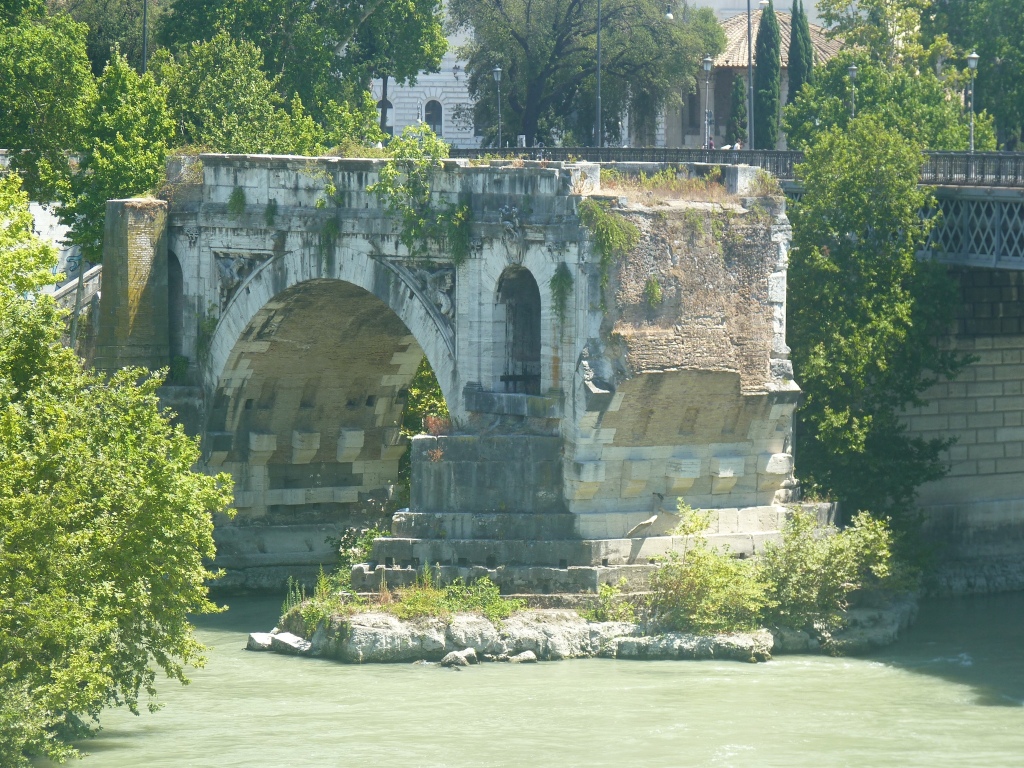 And we think the Patullo Bridge is old….

The sidewalk was so hot we left footprints! 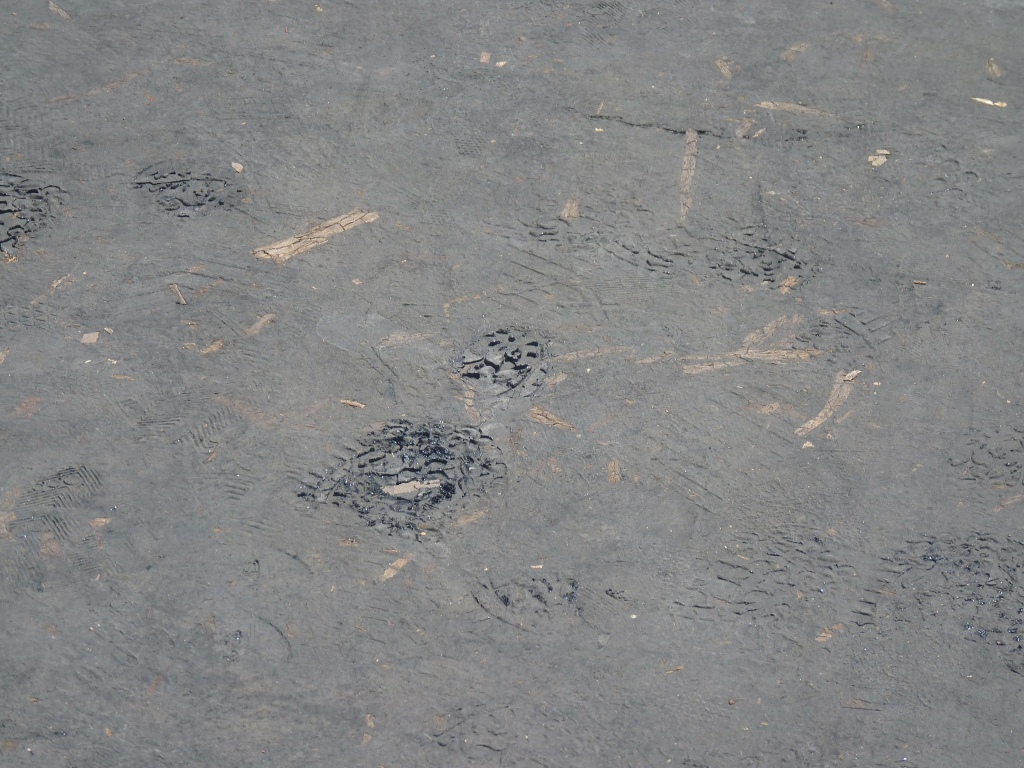 Next up was a short walk to the Church of Santa Maria in Cosmedin to find the Mouth of Truth statue. Bocca della Verita (the Mouth of Truth) was placed there in the 17th century. It is an image carved in marble of a man-like face. Thought to be part of a 1st century ancient Roman fountain or a marble manhole cover portraying a pagan god, possibly Oceanus. Said to be an ancient lie detector. In the middle ages, it was believed that if one told a lie with their hand in the mouth of the sculpture, it would be bitten off.

Eric was a little hot and ticked his hand wasn't actually cut off when he lied. Ergo his expression. 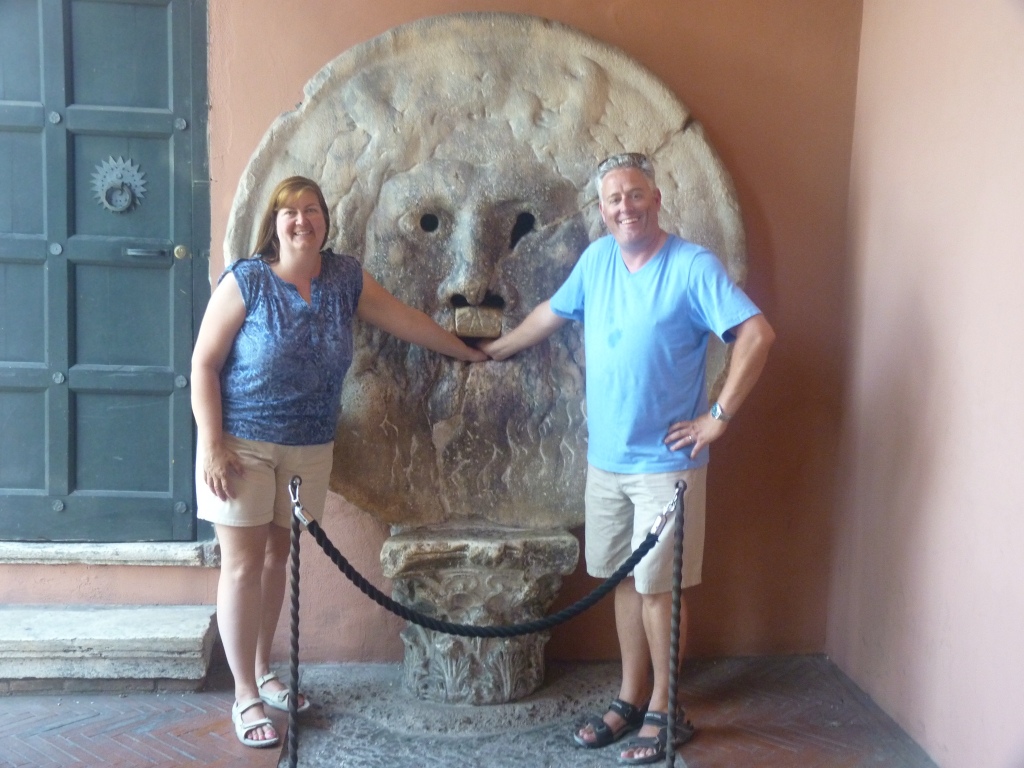 At this point we were all mostly done. But on the way back to the Metro was the Pyramid of Cestius. Google said a bus was supposed to come practically right away. Either Rome buses aren't particularly on schedule or Google doesn't know wtf they are showing. We waited, a long long time. In the sun. With no shade and my water in my camelbak had run out. Kind of killed the rest of the energy we had left. When a bus did come we took it 4 stops to find the Pyramid of Cestius.

The Pyramid of Cestius is inspired by Egyptian pyramids and is the tomb of Caius Cestius who died in 12 BC. It is 89 feet high. Beside the Aurelian city wall built 271 – 275, it actually makes up part of the wall.

After this it was Metro time. Back to showers, AC and some rest before dinner.

Tomorrow is an early start and a travel day. Time to come home.