This morning we had a more civilized start to the day.   Back to our nice breakfast in the hotel and we were met by JT at 9.  We went first to the Maliandao Tea Street which is a few blocks of tea shops. In addition to the many tea storefronts there is also the Tea Market.  The Tea Market is a four story mall made up of small shops inside.  Each shop represents an estate or group of estates from the same area.  The mall is about the size of a city block.  All tea.  The Chinese like their tea! Apparently drinking the right kind of tea can help digestion, relieve inflammation, improve brain function, cure cancer, confer immortality – ok maybe it was just the first few but it seems that tea is quite the amazing beverage.

You can see in this photo some different tea serving tables all piled up. Tea is prepped on the table and dumped into a drain – it can get quite messy. 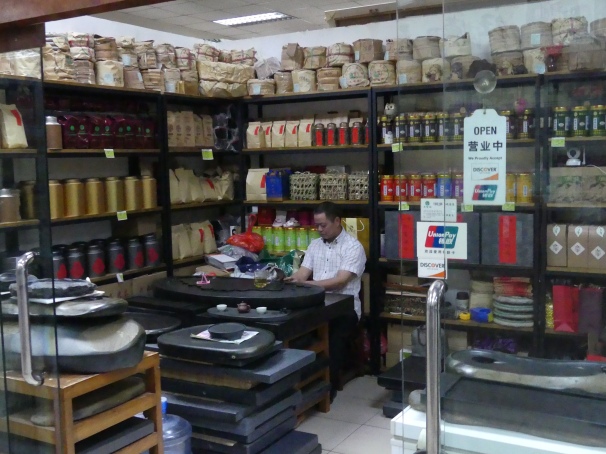 The round packages on top are white tea and black/red or green in the bags below.

We randomly wandered the aisles for a bit.  We stopped at a shop that had large boxes of tea out front.  Each box was 50kg of tea and about the size of a small bale of hay.

This is the owner loading our bag that we bought.

The market is mostly wholesale to restaurants and hotels so our guide was curious how we even knew about this place.  Kris is a wonder of research!  Apparently this isn’t a normal tourist thing as the tea merchant gave her card to JT and, while I didn’t understand a word that was said,  I’m sure it went something like: “Bring all your future tours here and you’ll get a kickback.”  We know it’s common for guides to get a kickback from stores or restaurants that are suggested.  We are mostly ok with that as it’s part of the game but we like to control when if not where.  Today we got to choose both.

We then visited the Summer Palace.  The Summer Palace is on Lake Kunming north of the city. The area originally started being built in 1153 and has had many regal uses by many emperors, each adding their own unique parts. It is almost entirely man made including the lake. The dirt from digging out the lake made the hill. The temples and such inside were all called Longevity something – Longevity Temple, Longevity Island, Longevity Hill etc etc.

Buddhist temple at the top of Longevity Hill 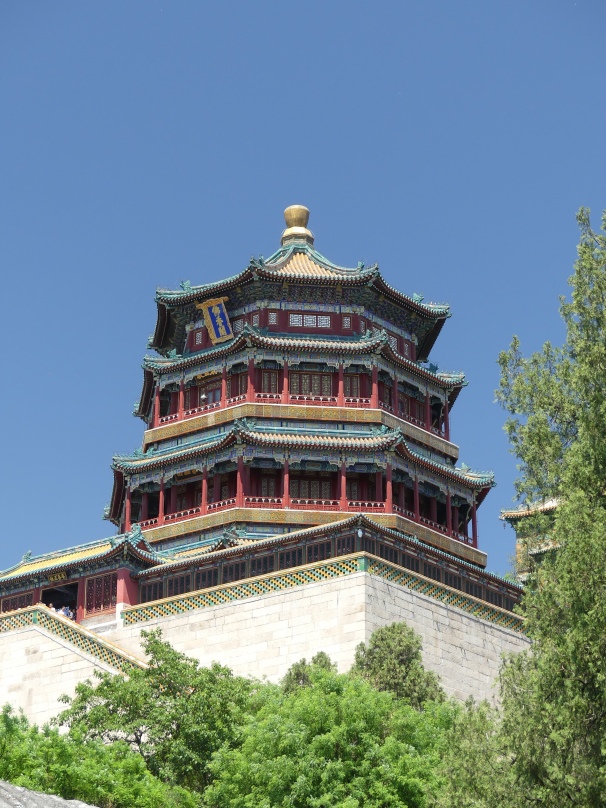 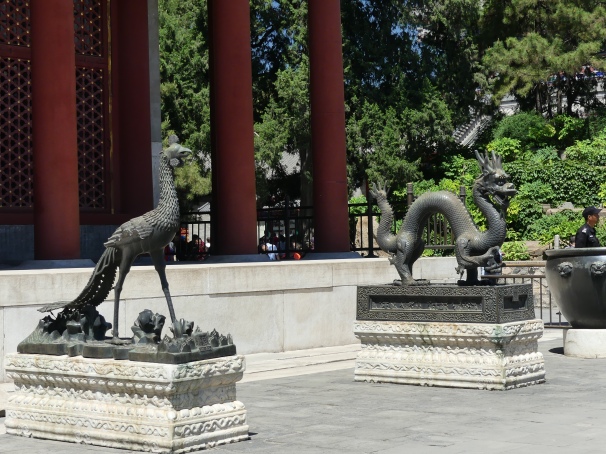 the Stone Boat (actually wood painted to look like marble). Built based on a quotation by a royal chancellor who warned the emperor that “waters that float the boat can also swallow it”, implying that the people can support the Emperor but can also topple his regime. Now used for dinner celebrations with VIP’s. 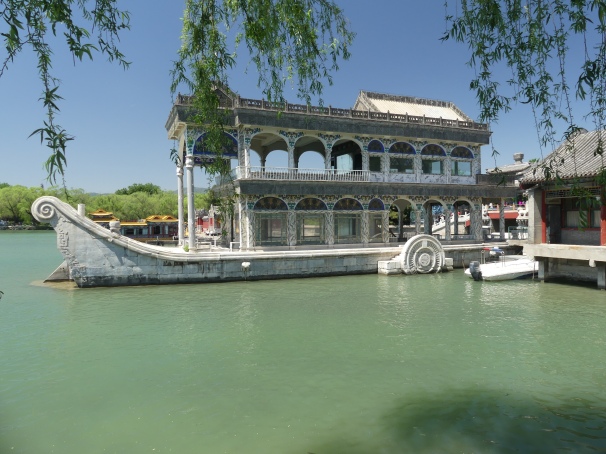 We took a dragon boat ride across the lake.  It was more of a barge than the dragon boats we are used to seeing race in False Creek.

From there it was time to head to the Beijing Airport to catch our flight to Xian.  When we passed through security were both given quite the search.  Kris more so than I. Apparently her female guard got quite handsy.  We had enough time for some lunch. My pointing and the cashier’s English didn’t quite match up.  I thought I ordered a noodle in soup dish but we got some sort of ground beef in pepper sauce. At least it was tasty. I wanted some steamed buns but they were breakfast only.   We collected chop sticks but the staff decided we needed a fork and knife.  We used chopsticks.

Our flight to to Xian was a little bumpy on the climb out but smooth otherwise. We were met by our new guide Kevin (real name is Yan). He is a bit of an artist. He showed us some photos of his work and gave us a painting as a gift. Incredible. His English is also very colloquial. I suspect that’s because he is much younger and claims to have Facebook access.

We drove for ~40 minutes and then arrived at the Huaqing Aegean International Hot Spring Resort and Spa. It’s big and beautiful but a little odd in places. It’s like some consultant built the idea and then didn’t leave instructions on how to run it. The dinner restaurant gate/door was closed but the restaurant was open. How are you supposed to know? There is very little English spoken by the staff here. It’s been a bit of a challenge but we have been using our google translate. Our Beijing hotel had pizza on the menu, but we never tried. Tonight, Kris got a craving so we got one for dinner. I have to say it was pretty good. Kind of like a really good store bought/take and bake with onions and lots of peppers.

Tomorrow we see the Terra-cotta Warriors.