The Terra Cotta Warriors of Xi’an are 2200 years old. More than 10,000 life-sized clay statues represent a funereal honor guard for China’s first Emperor Qin Shih Huang-ti who died in 210 BC. Each warrior is unique in face or clothing and are very real looking.

Emperor Qui sought the key to immortality and had the guardians made to watch over his grave to protect his soul (but if he didn’t think he was ever going to die, why bother?). Qin claimed descent from the ‘mythical’ Yellow Emperor who was said to have the secret to eternal or at least very long life. He is possibly buried in a subterranean mausoleum.

There are three excavation pits at the site. This is the building surrounding Pit 3. We did the tour backwards as Pit 1 is the highlight.

But first you have to visit the factory that makes the modern versions for sale (of course). Out front are some headless and backless models you can pose with. Much better than the plywood versions we see at fairs! Kris is the Empress, Dave is a high-ranking General. 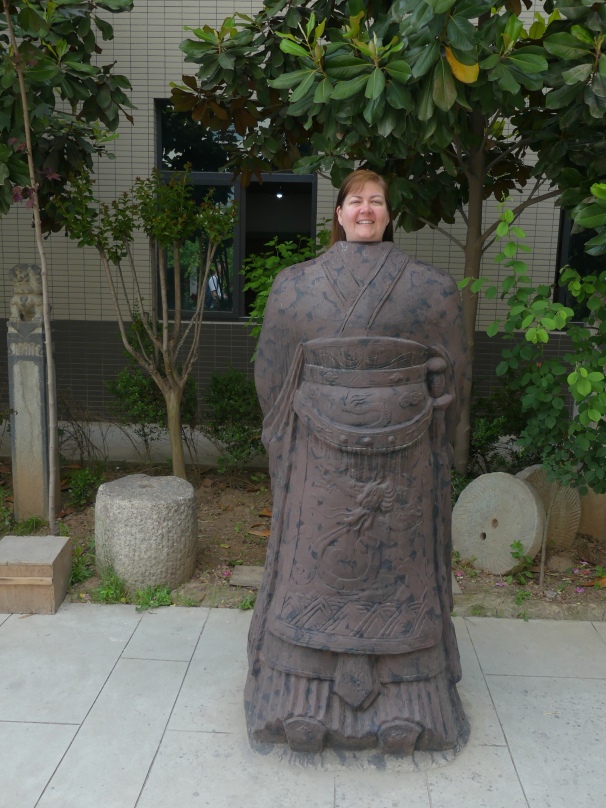 Inside are demonstrations of how the real warriors were made as well as showing the process of how the miniatures are done. Those boxes below are the molds and the lady is pressing the clay into one. They are then air dried for 7-10 days depending on the weather then kiln dried at 900-1000 Celsius for 3 days. Then out for sale for us tourists to buy.

Replicas you can get up and close with. 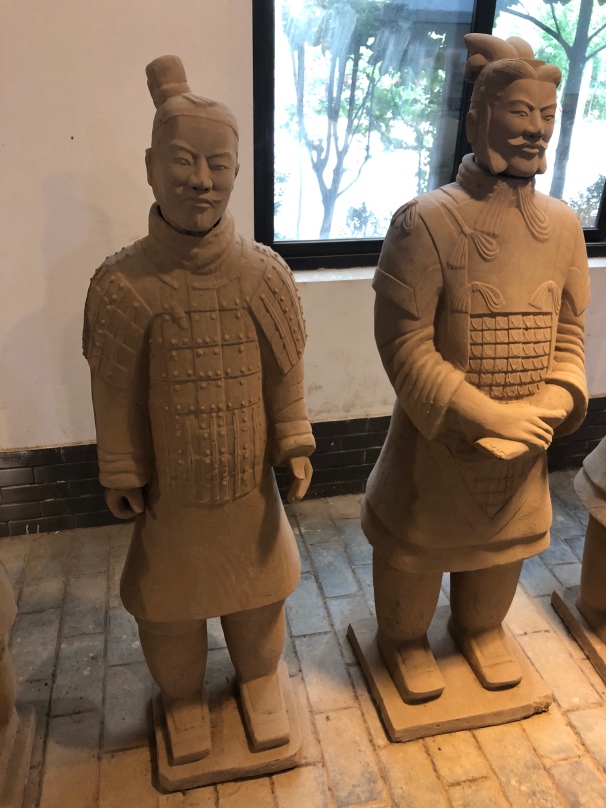 Once we’d made the obligatory sacrifices to the gift store gods we headed into the actual area.

It’s funny how things get found. Some farmer was digging a well on his land and discovered the site. He duly notified the government who said “Good boy, now get off your land.” Mr. Yang got credit for the find but no real money.

But is shows that even modern governments can be as bad as the ancient ones. Emperor Qui was quite the tyrant to his people and much hated, so when he died looters stole the weapons and jewels from the warriors and then smashed them so his soul wouldn’t be protected. I’m thinking something about Karma fits here but I don’t know what the Taoist version is called.

So all the photos of the warriors standing in neat little rows are restorations. The archeologists did leave large sections unrestored. It’s what we saw first.

This is/was a horse. 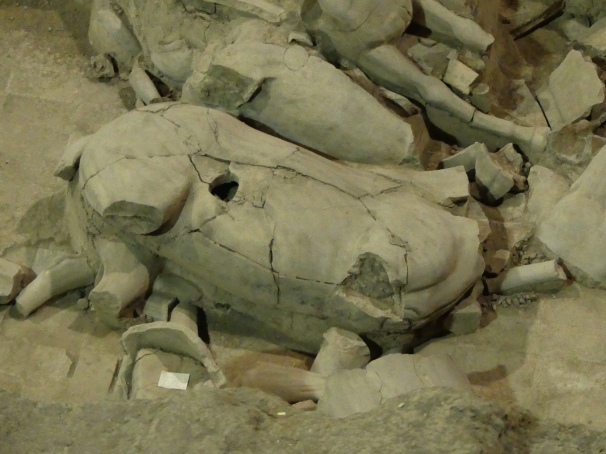 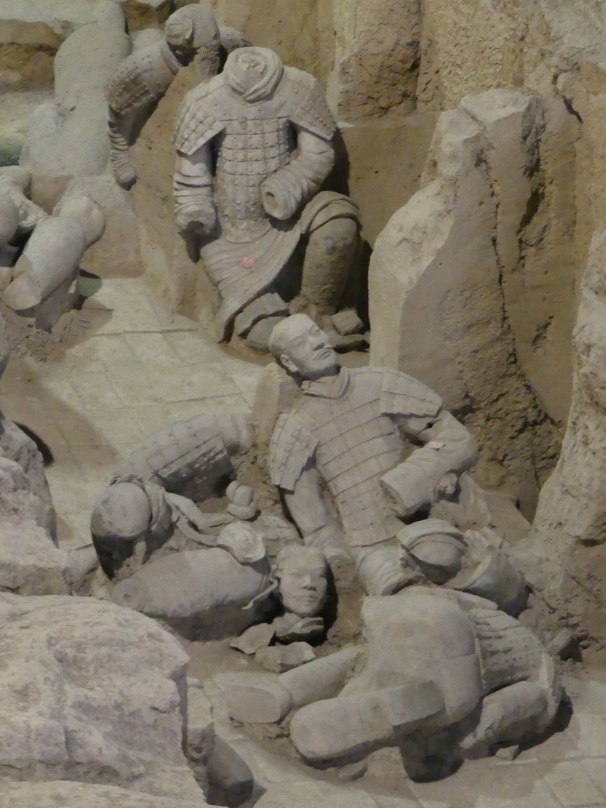 A restored head, you can see the seams that were glued back together.

Fully restored warriors stand in rows in Pit 1. It’s the one you probably picture when you think of the warriors. 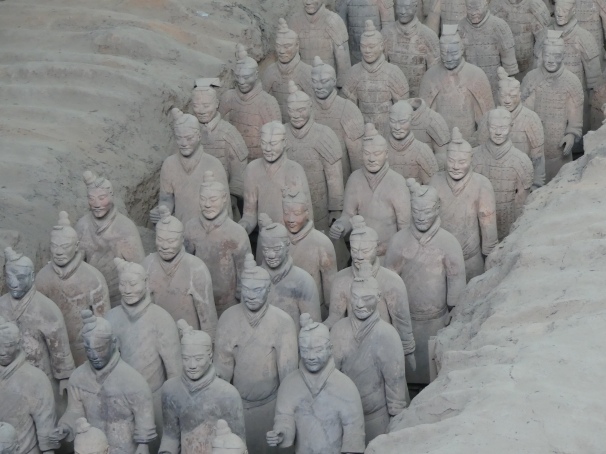 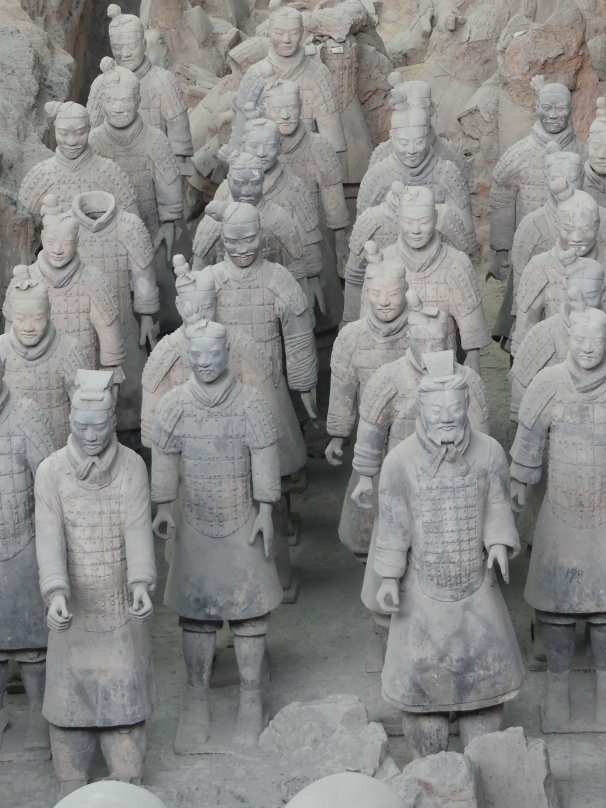 This one below is a general. You can tell by the hat and the scarf he’s wearing. He’s a low ranking general but still a general. More scarves (up to 8) means higher rank. Emperors get 9 and gods get 11 (we don’t know who gets 10…)

You can see the scale of Pit 1 here. It’s larger than a football field.

Each face is different. It’s pretty cool to zoom up and check each one out. The soldiers are from all over China. Kevin, our guide, showed us a few from north, east, west and south. 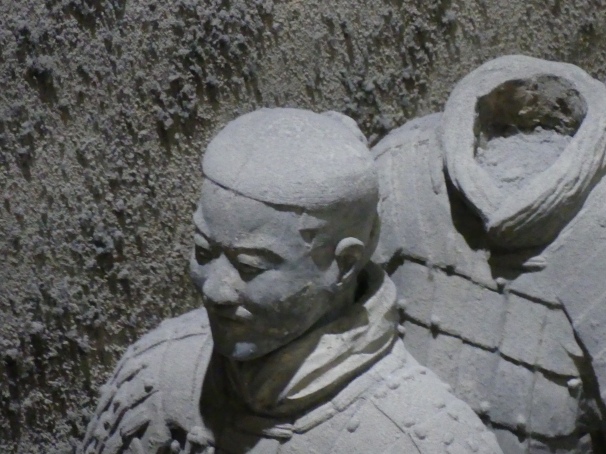 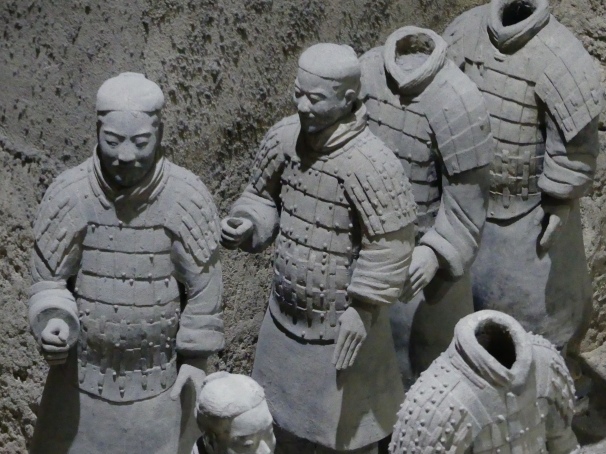 There are even several horse-drawn carriages, all parts of the Chinese army of the day were there. Gotta protect that soul!

More shots of unrestored bits and pieces. We called this one ‘sleeping standing archer’ 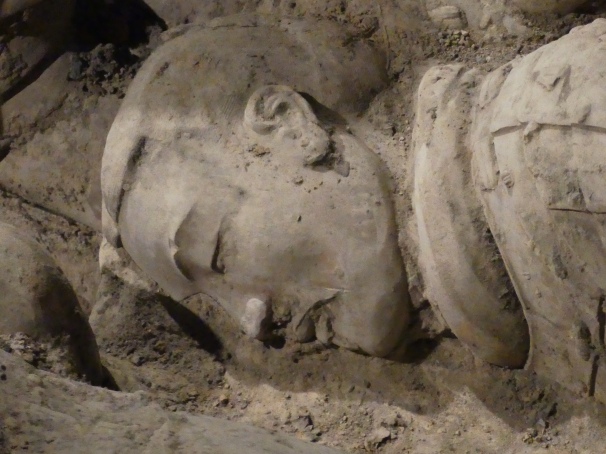 This is the only non broken soldier found so far. He is kept in a safe case out on display. He is very detailed, down to fingernails, creases in his palms and tread on the bottom of his shoe).

We had lunch at a place recommended (of course) by Kevin but he did talk about some foods we needed to try. Mongolian beef and shallot, a sweet and spicy pork dish and eggplant and asparagus something or other. He told us that the eggplant would be our favourite. He was right. Very delicious. Dave liked the pork but it was too spicy for Kris. And the beef was so so. We haven’t starved yet. Or even close for that matter.

We finally had some downtime in the afternoon. A little bit welcome to chill for a bit. Dinner was at the hotel again. Nobody spoke english so we were given and iPad with photos and we could click on what we wanted to eat. Kris elected to have the club house which ended up being perfectly done and Dave ordered a hot pot with some sort of dark meat. Turned out to be short ribs. Hard to tell from the photo! Like I said, we haven’t come close to hungry here at all. They even had a wheat beer – JIU which is locally brewed. We had to try that too.

It’s always interesting when it comes time to pay a bill. Different countries treat it their own way. Here you have to ask for it, as most places outside North America, but then they want to collect right away. Fine, I dislike waiting to pay anyway. At this particular hotel we can’t charge stuff to our room so cash it is. But once you give cash to the person who presented you the bill it seems to take 4 people and 3 locations to process it. And you can’t tip. We tried. Tipping when traveling is probably the hardest thing to figure out. We always search out the customs, ask our travel agent in country and generally try and get it right. However you can never seem to get a straight answer as nobody really wants to say you have to, it’s always a suggestion and sometimes a huge range. Here in China it’s not historically been a huge thing to tip but it’s coming. We tried to tip our driver in Shanhaiguan and he flat out refused, our driver on the Great Wall day finally did accept. And our other driver in Beijing did without comment. Like it was normal for him, or he’s just smart and took money from people handing it out! Anyway, at dinner, I rounded up the bill as is custom here (so we are told) in large hotels. But the waitress chased us down and refused it, but of course getting change (8 Yuan, about $1.25) was a production. We don’t want to offend anyone of course, but I’ve often thought of creating a TripAdvisor style site for people to post and rate tipping rates and who gets tips and who doesn’t. It shouldn’t be that hard really. We just want to do the “right” thing, whatever that is in whatever country we’re in. Mind you, if that’s your biggest worry when traveling, it’s ok too.

Tomorrow we are taking a train to Chegdu to set ourselves up to see pandas!