People often ask how we choose our trip locations and why. For China it was the Great Wall and pandas. After we decide the reasons, Kris builds a trip around them. It always leads to more and interesting stuff of course, but the base has to be there to start. Since we’ve already done the Wall, it was time for pandas. And boy did we.

The Giant Panda Breeding Research Base is one of five breeding centers in China and only one of two open the the public.

We have a good friend named Amanda. When our boys were little they couldn’t pronounce Amanda and called her Auntie Panda. The name stuck. Amanda, here is your namesake:

The breeding center is very well set up, both for us tourists as well as the care of the animals. We didn’t exactly count but likely saw 7 babies, 4 teens and 8 adults.

Our guide made us take this pose. We promise. It seems the peace sign thing has finally passed and now you have to do the heart. 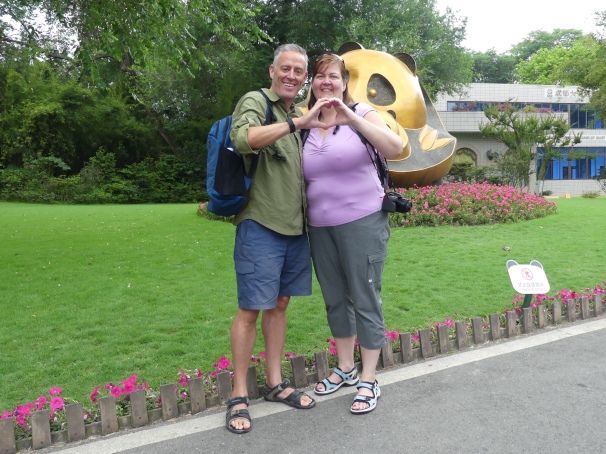 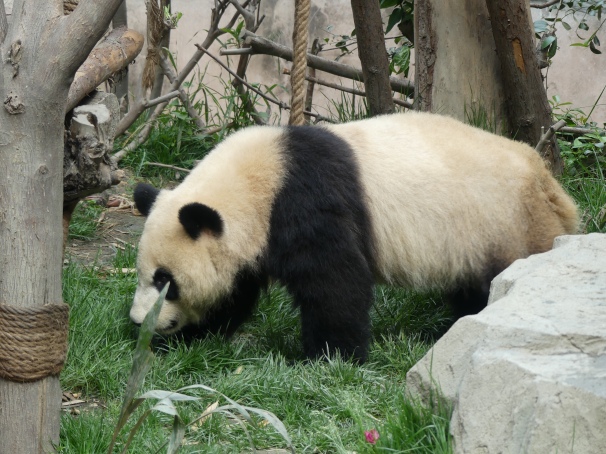 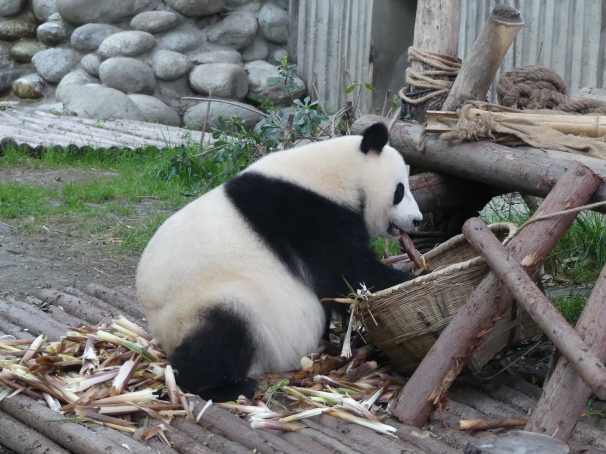 There are hundreds of different types of bamboo, but pandas only eat 27 kinds – about 30kg a day of it. And here they are extra fussy and only eat fresh bamboo shoots. Here is a delivery truck with today’s load for this enclosure. It’s trucked in every day for them. 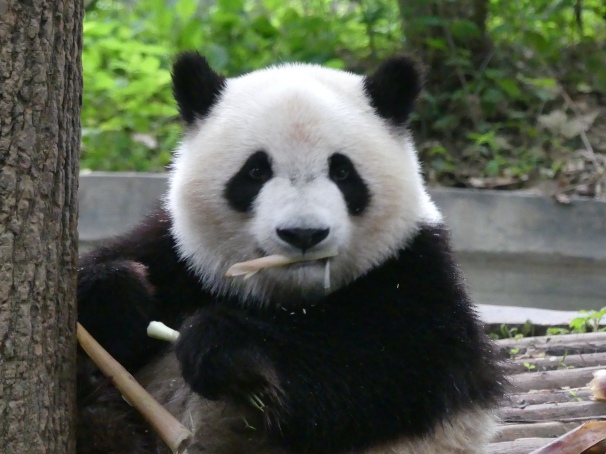 Young ones sleeping in trees. They are last year’s babies, about 9 months old.

My my what big teeth you have. Those teeth do shred the bamboo very effectively. That bamboo stalk in the photo probably only lasted a minute or so.

This teenager was checking us out as much as we him. He was about 50′ up the tree. 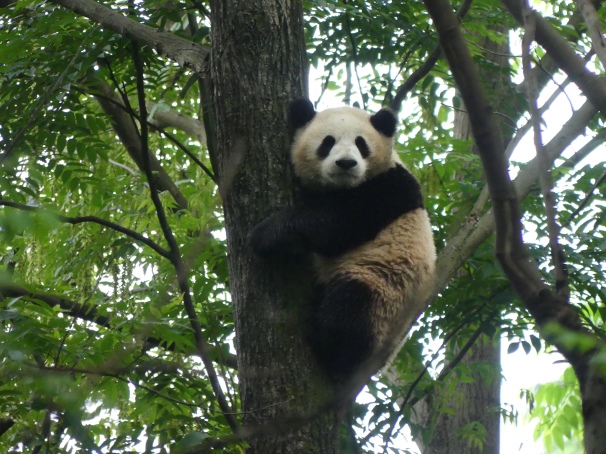 Everybody was Kung Fu Fighting! That song was in our heads quite a bit thanks to the Kung Fu Panda movie.

I should title this one “Monday Morning” or maybe “Duuude I’m sooo drunk…..”

They also care for Red Pandas there and we saw at least 7 of them. They were more active by far and act more like raccoons. Very cute in their own right with very expressive eyebrows! 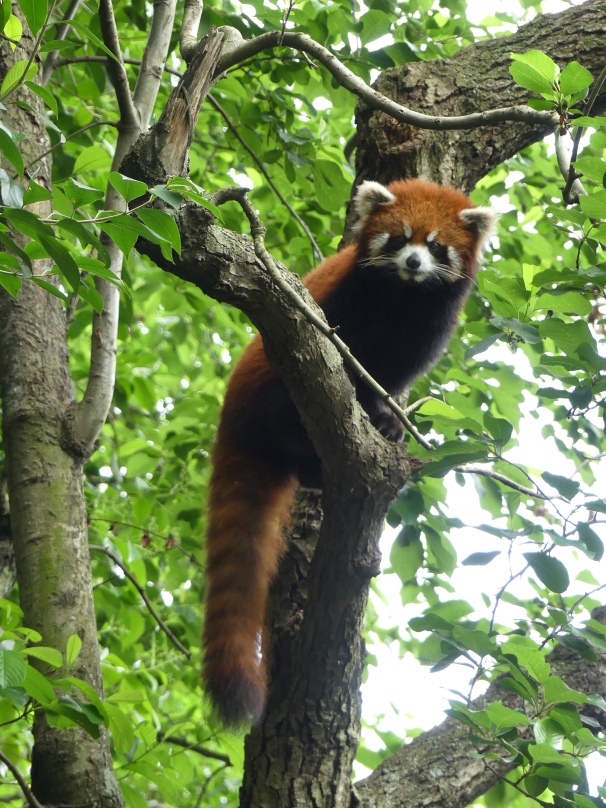 And the obligatory selfie in front of the large cute photo. 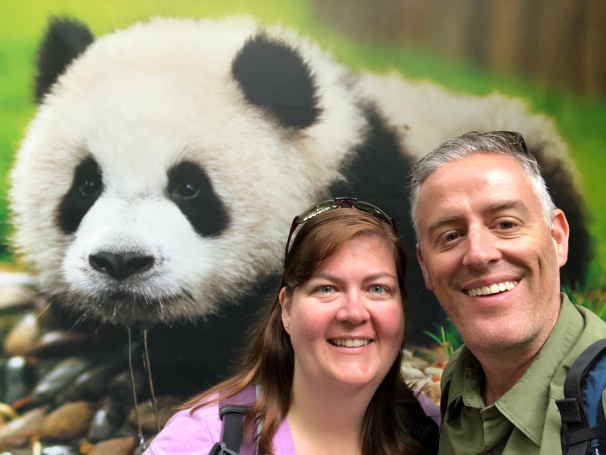 Pandas are a little curious evolutionary wise. Way back when, they used to eat meat but evolved during an ice age to only eat selected bamboo varieties. They only mate once per year in the wild and the female is in heat for literally only a few hours. They often have twins. Mom chooses to feed what appears to be the healthiest cub and lets the other one die.

Here at the center they rescue the other twin and then rotate the cubs around all the moms so they all get fed breast milk, and some sort of formula in between. Pandas gestate for 80-200 days depending on the health and strength of Mom. That’s quite a huge range. Leopards and foxes (and man) are their main predator. They used to be killed for their pelts, but now they are in danger of habitat loss due to farming across China. There are about 2200 wild pandas left in the world. But I have to wonder how they survived this long. Fussy eaters, low birth rates and solitary living choices generally don’t make for good evolution. They are super cute though.

Somehow we’d managed to be hungry again so we headed for lunch at a local farm market (Luna said the restaurant inside the panda base was not very good). It was like a food court with multiple different restaurants and a huge outdoor seating area. It was full, as a wedding lunch was just finishing. Our driver was saving us a seat. Yet again we ate well. I have to say the food on this trip has been fantastic.

Of course in the market are tons of souvenir stores. We had giggled a bit at the panda head hair bands that all the girls were wearing. So Kris had to model one. 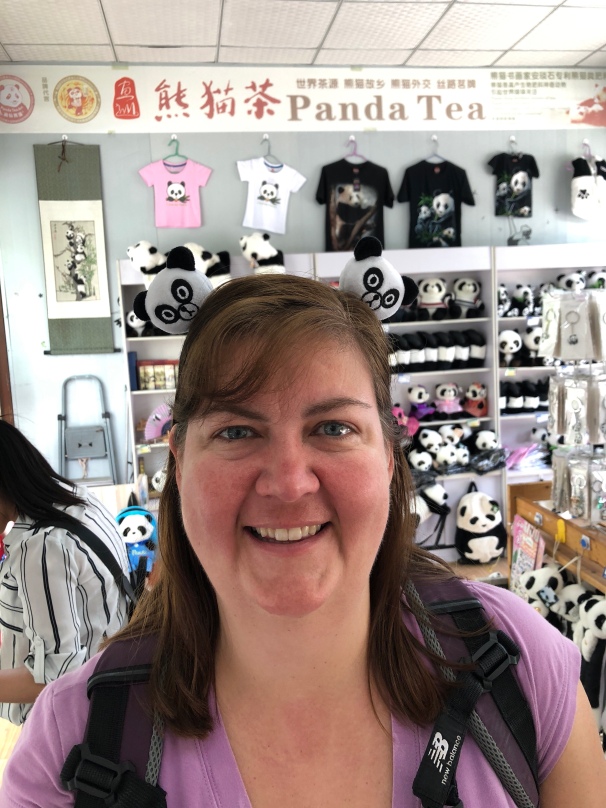 We were dropped off early at the train station and found ourselves with some time to kill, so we ended up at the tea house paying for a cup of jasmine tea so we could sit in their comfy seats (actually we had no idea what we were getting, the menu was all in mandarin, so we ordered two of the cheapest one!). Tea in beer steins. Sure.

On the train from Chengdu to Chongqing.

We’ve been averaging about 150 km per hour over the last couple trains but today I happened to look up and saw 297!

The view out the window has been a curious mix of rice paddies and tall towers. We’ve noticed quite a mix of old traditional villages abutting right up against brand new tall (50+ story) apartment buildings all the same decor, many in a row. One of such compounds we saw just outside Beijing must have had 50 towers. It’s more common to see a dozen or so towers grouped together. Probably housing 10 000 people per compound. Most of the units are two bedroom that are about 900 square feet. Luna our guide wants to buy a 1200 square foot unit as that is ideal according to her.

We were met in Chongqing by Royce, our bubbly guide for the next two days. Chongqing is a city of about 33 million on the Yangtze River. It’s grown rapidly over the last 20 years and manufactures mostly auto parts and trucks. But given the hydro electric power, there is very little smog compared to other cities so far. In fact downtown Chongqing reminds us a little of downtown Vancouver. Lots of small hills, tall new towers and shops abound. We are staying in the J W Mariott Hotel so it’s a little soulless, but the internet is fast and it’s only 1 night. Instead of eating overpriced food in the hotel (like the lovely older couple we rode the elevator with) we decided to venture out and see what we could find. And find we did. Right in our neighborhood area is a shopping district. There are lots of food kiosks. Think street food but in tiny shops. One particular one looked tasty. Some sort of pastry with egg and veggies. The nice men who served us didn’t know what to think. Funny story, the water bottle in the hotel (Evian mind you) was 68RMB, dinner which was made up of the two frittatas and a chicken-stuffed sesame bun was 12RMB. That’s $2.50 Canadian. And it was tasty! Wonder how much the American couple paid for dinner in the hotel… 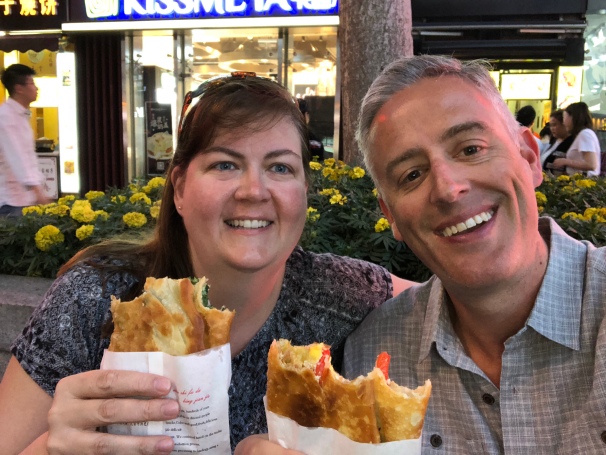 Once we were done eating we realized there is the story of the shop on the packaging. Love the translation. We had to take a photo. 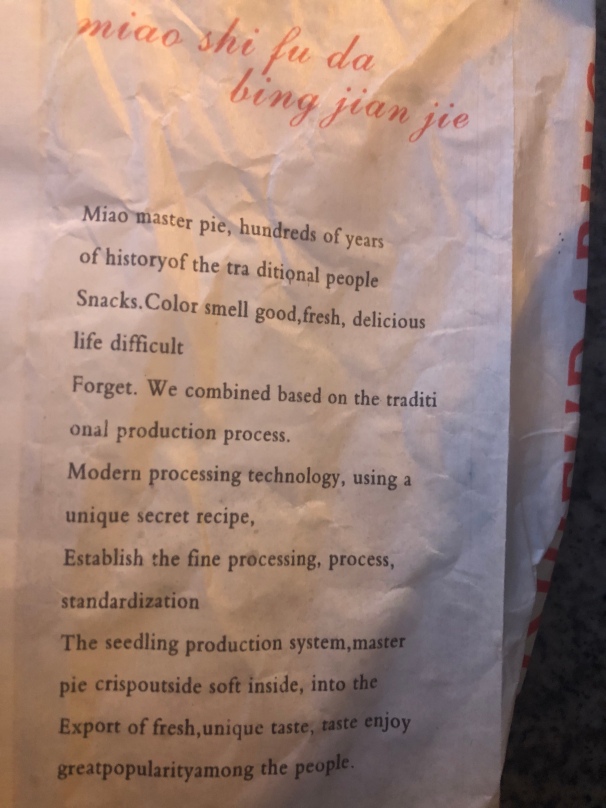 We did not eat here.

We also wandered into a couple of shops. There was a London Drugs type store that had everything from make up and pharmaceuticals to toys. But one smaller shop we explored more closely. The shop lady followed us around, chatting in Mandarin, pointing things out that we didn’t understand. We kept smiling. Finally she opened a couple snack packages for us to try. Yum. We definitely bought some of those. I found some peppers but I figured that would be hard to bring home.

Mmm Hot Pot base ingredients. Peppers – chili, green and black. The owner tried to interest us in a buckwheat tea (never heard of it) but we have bought so much tea already – kind of concerned about how we’re going to get it all home.

Another block or so away is a square. It must have sort historical significance but now it’s high end shopping. That tower in the center of the photo below is shown in our hotel with no big buildings around it. How times change. 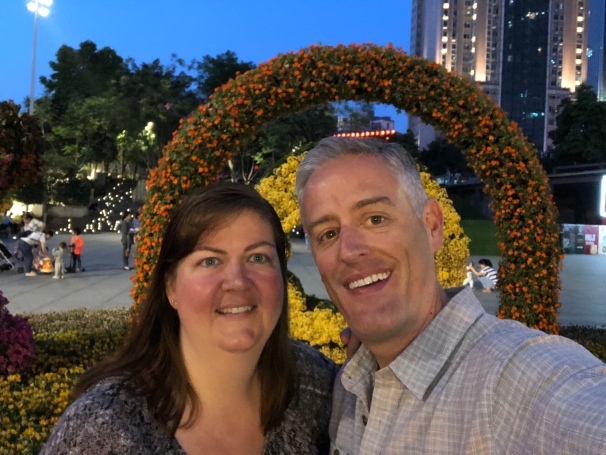 Tomorrow we drive about 2 hours to a small town called Dazu to see some Buddhist cave paintings and then board our Yangtze River Cruise.