City lights in Chongqing just before ‘sail away’ last night. 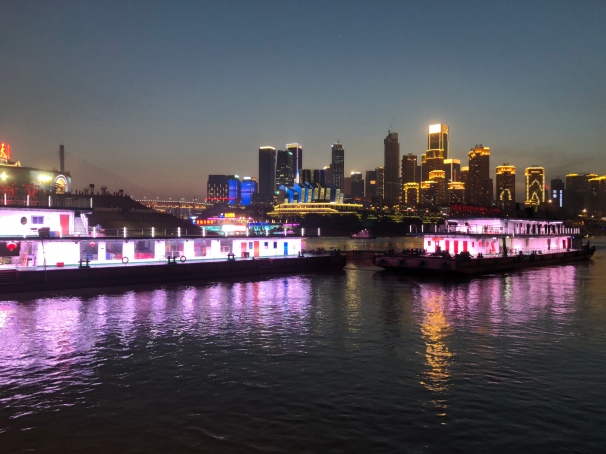 The booze cruise business is alive and well here too. 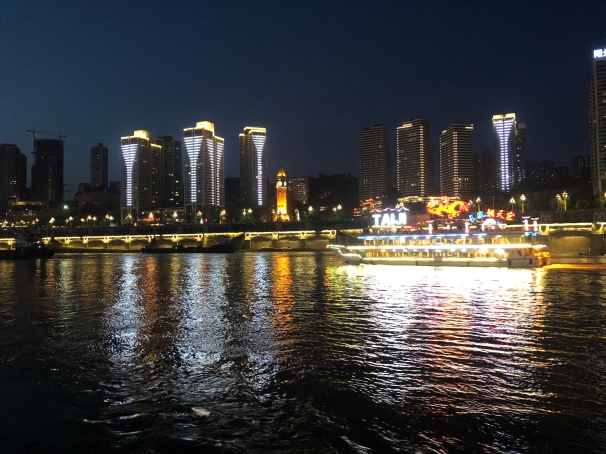 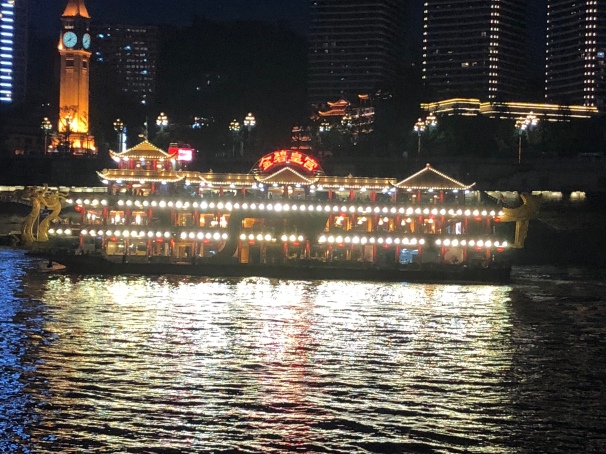 Our first shore excursion this morning was to the Fengdu Ghost City. It is a large complex of shrines, temples and monasteries dedicated to the afterlife, located on Ming mountain on the north bank of the Yangtze River. The temples contain statues related to Diyu and Naraka, concepts from Chinese mythology and Buddhism that signify the underworld or hell. After the building of the Three Gorges Dam and the rising of the water level, the complex was cut off from the city of Fengdu (which was rebuilt higher on the south side of the mountainside) and was mostly abandoned. It’s now a tourist attraction. There is a recently finished cable car that most of our group took but I was feeling like I hadn’t had a good workout in a couple days so did the 400 steps. It was a bit warm but worth it. 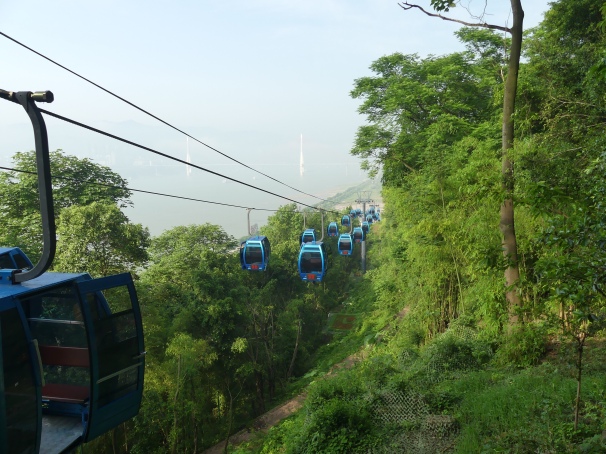 On my way up I did find a funny sign. Well, funny translation. Not sure what it’s supposed to say… 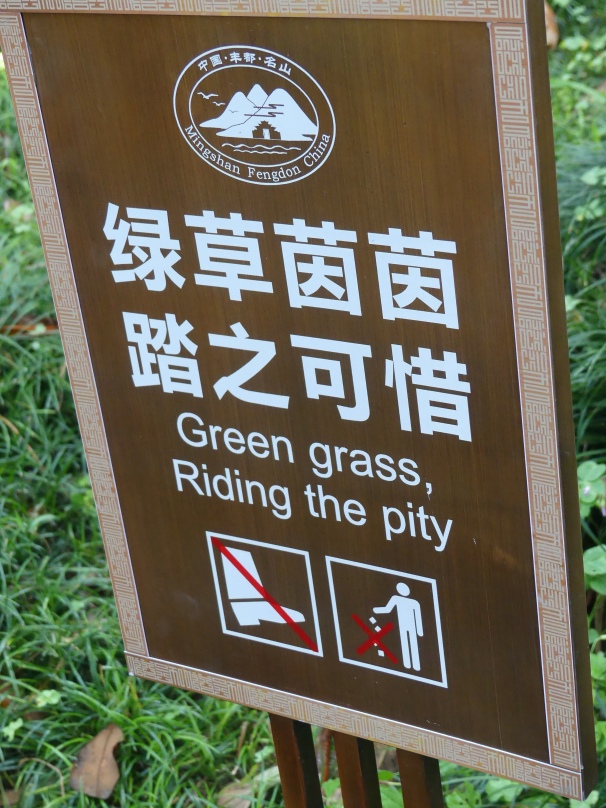 As all the other temples we’ve visited, these were quite beautiful . Red lanterns are hung in the trees to bring luck and candles / incense sticks are burned to notify the god of your prayers. 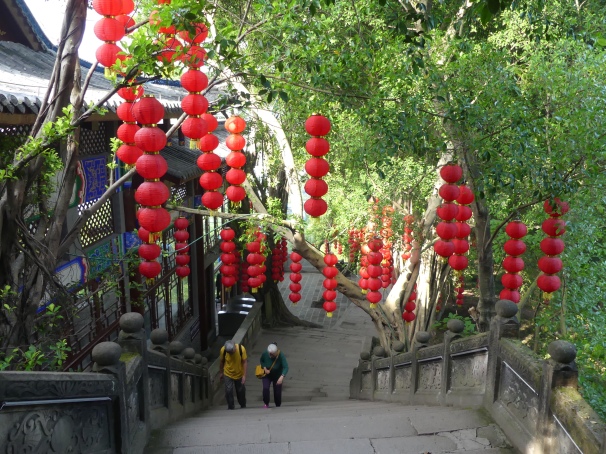 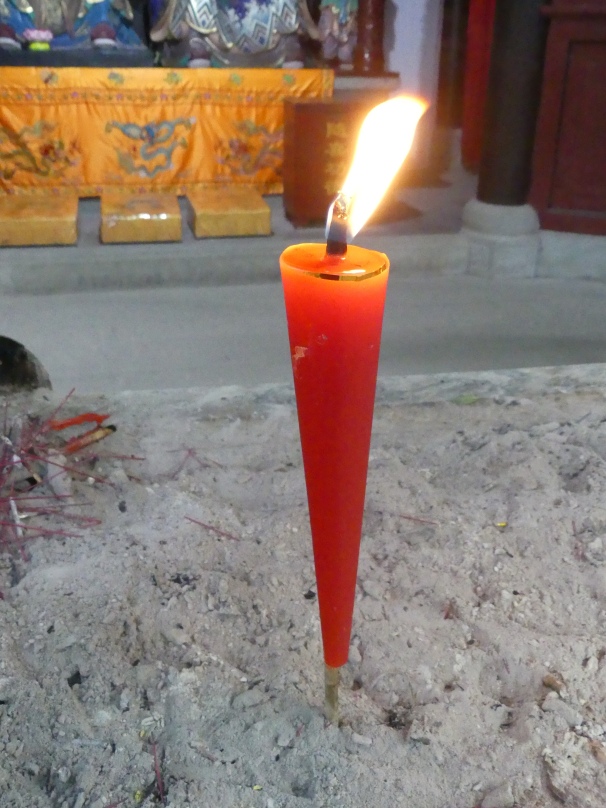 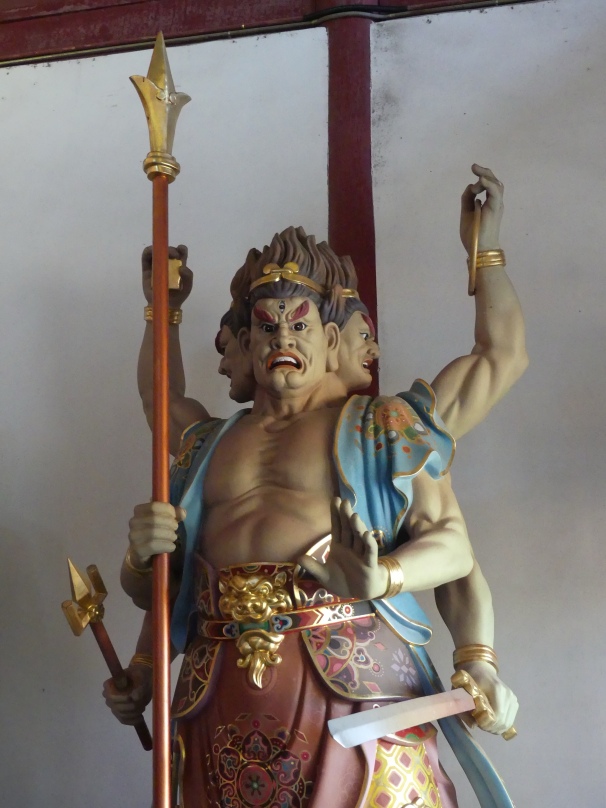 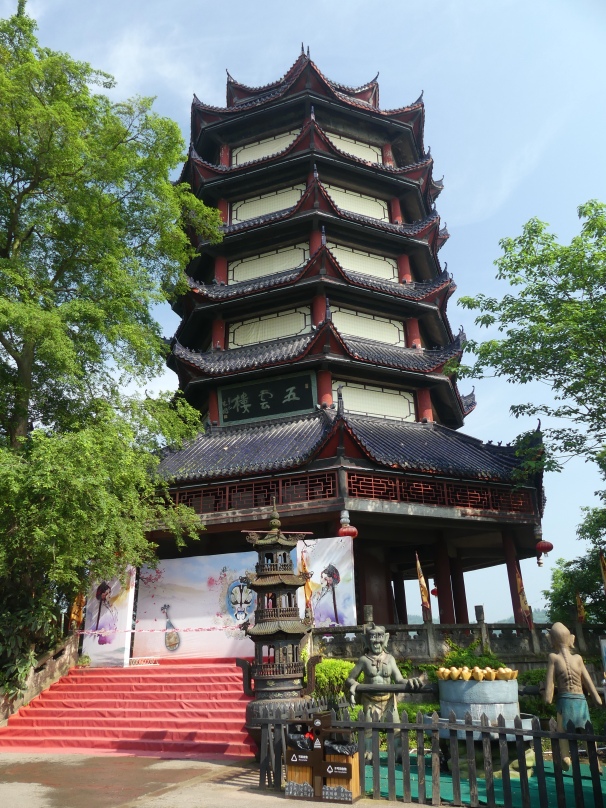 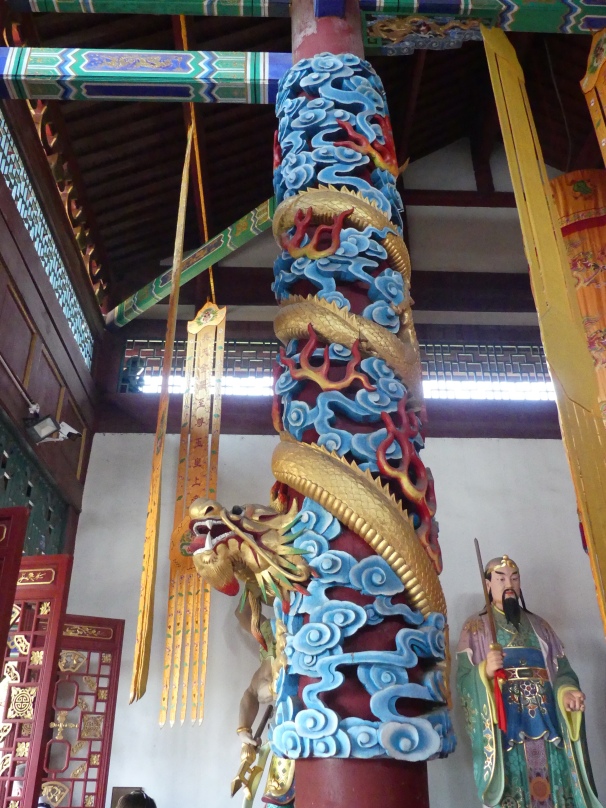 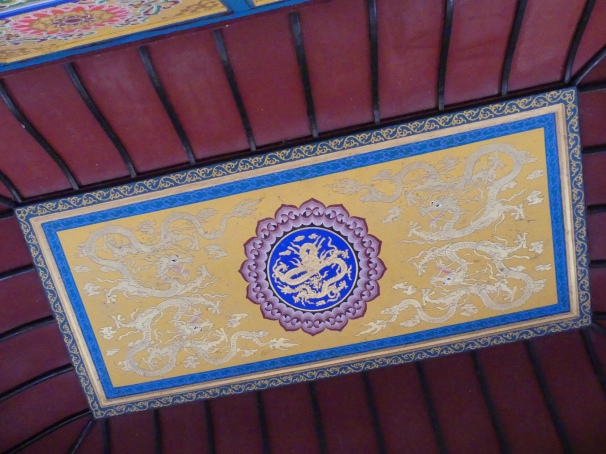 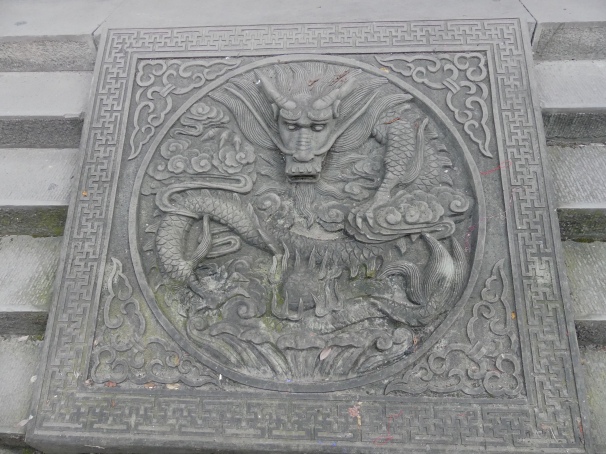 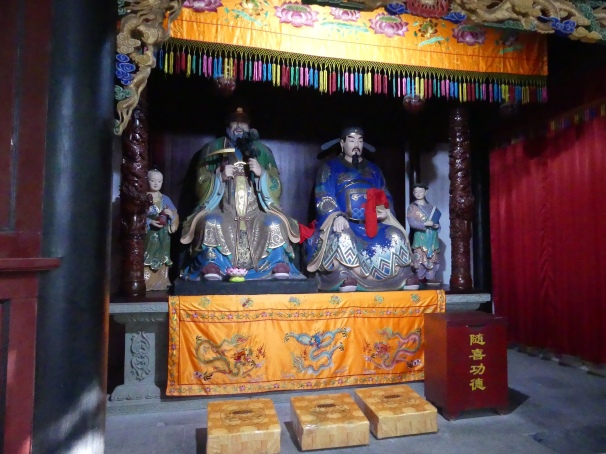 There are a mix of Taoist and Buddhist temples here mostly celebrating ancestry. This is not a Ghost City in the sense of a western one. IE, it was never populated and always was intended as a place of worship. Ghosts just refer to the spirits of the deceased and are not necessarily antagonistic. 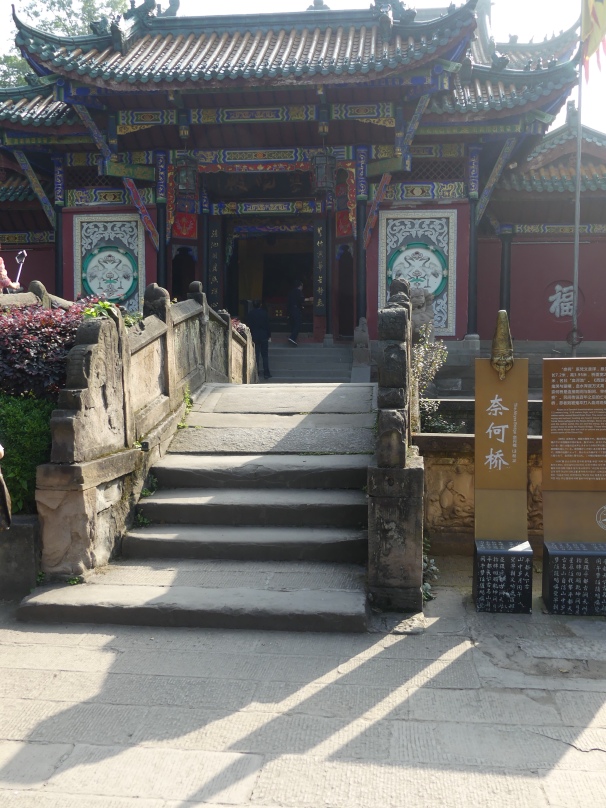 This is us passing over the bridge of good behaviour, one of two ‘tests’ of purity. If you don’t slip and fall on the steep and slippery rocks, you are a good person. We made it. This is the obligatory “professional photo”. For once it wasn’t stupidly priced and actually decent. Had I known we actually might buy it I would have taken my camera off! 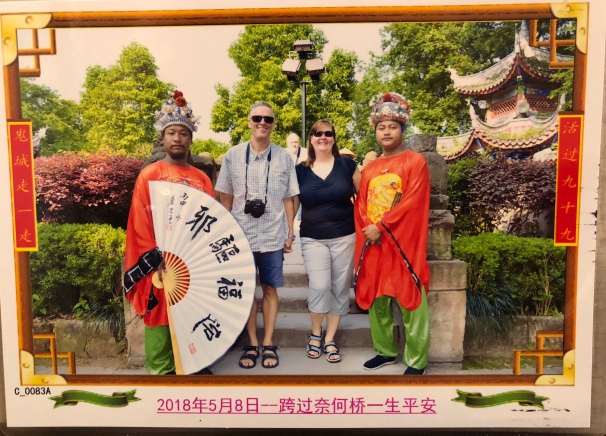 The other test of purity is a slippery rock that you have to balance on for 3 seconds on one foot to prove your worth. Kris and I both did it successfully. It’s kind of like a roadside sobriety test. 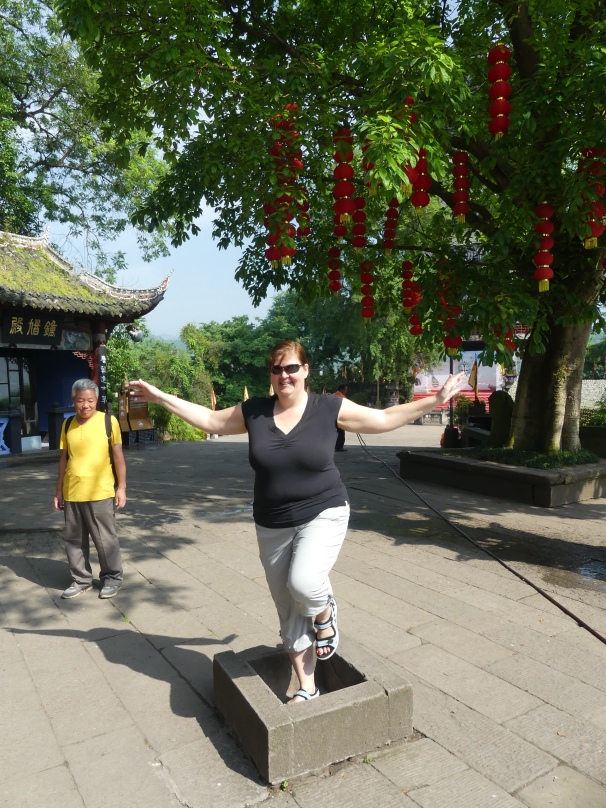 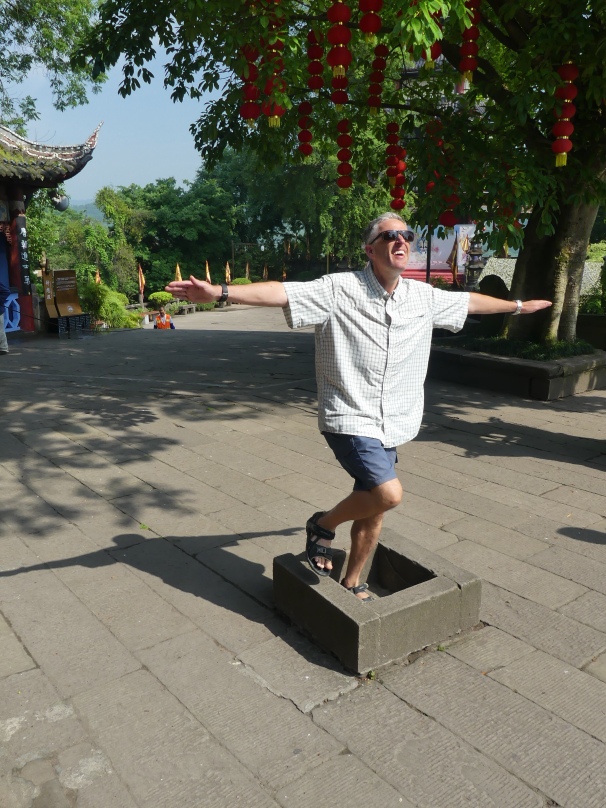 Every Chinese New Year many families display the sign for happiness. It’s more complicated than it looks! 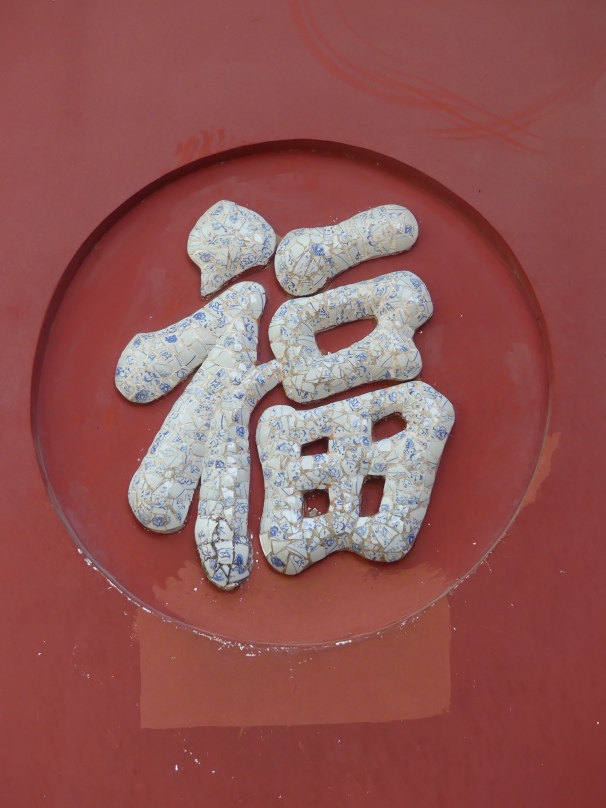 Being a Vancouverite I’d seen it dozens of times, and now I know the significance.  The top left “dot” is a head, the left swoop a robe, top right a roof over your head, the single square family, and bottom right is food. IE you are happy when you have shelter, family and food.

The cruise ships moor against floating barges that serve as docks. On the floating docks there are vendors of course. The food stalls had pig’s nose, tongue, feet and ears. We are adventurous eaters but did not sample for some reason…. 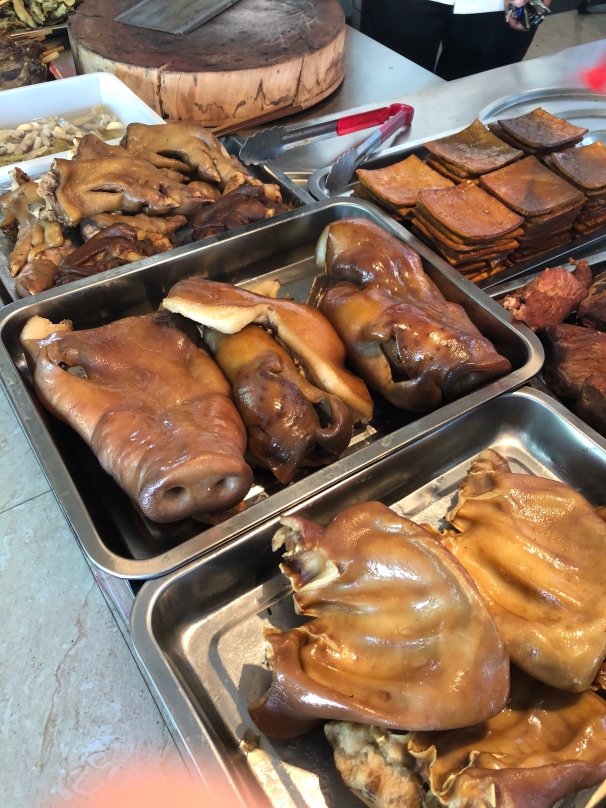 The afternoon was spent cruising down river. Here’s a couple random shots of the views from our balcony. It was nice to sip a beer and watch the world go by. 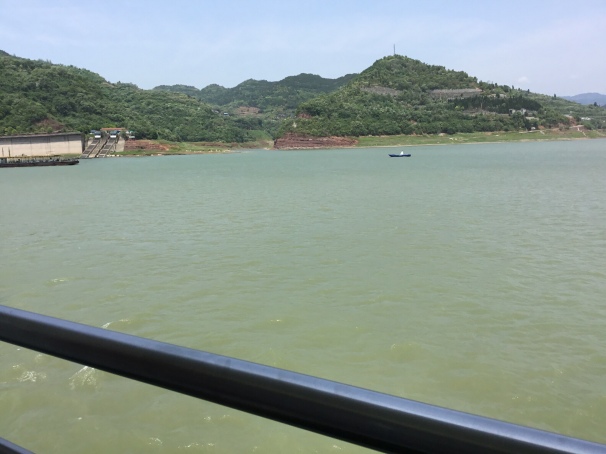 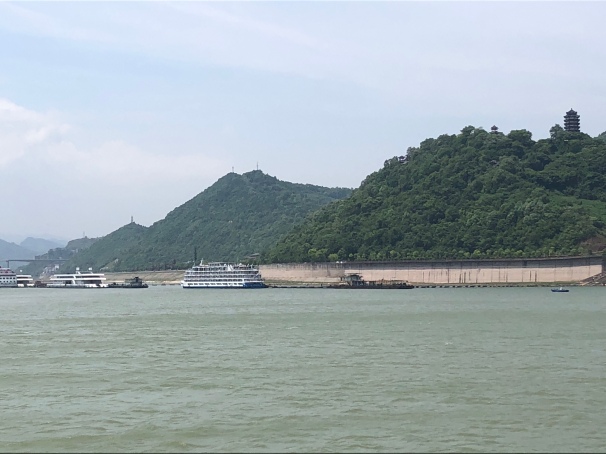 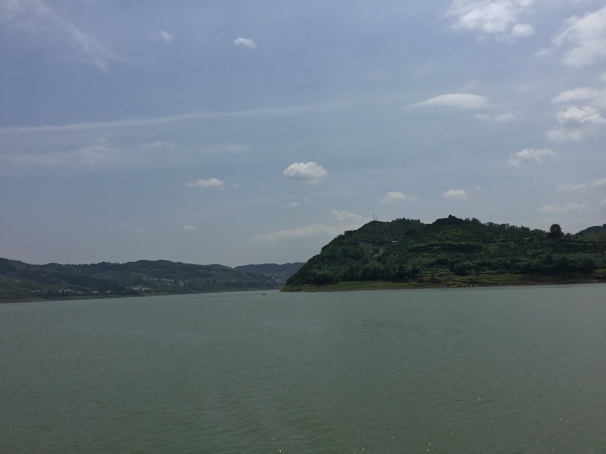 The river is remarkably clean. Actually China, as a whole, has been remarkably litter free. I guess we expected more litter and general dirtiness. We’ve been drawing comparisons to our trip to India a few years ago. Similar size populations etc. Indian culture was more or less an argument all the time whereas here, people push but do so patiently and when they lose out they accept it and move on. Way fewer horns and shouting. There are always people sweeping the streets and cleaning out the public garbage cans. And the infrastructure is so so much more advanced. In fact the joke around here is that while the Crane is the national bird, the Construction Crane is the real national icon. This trip feels much less culturally intense.

The second stop of the day was an island in the river. The Shibaozhai Temple, built in 1736, sits at the top. Before the 12-story pagoda was built in 1819, the monks had to scale the side of the cliff side with chains attached to the rock. The pagoda is essentially a really pretty set of stairs. It is said that the higher you ascend, the more of your prayers will be answered. All our prayers must be answered as we did climb to the top.

A view from the boat of the pagoda stairs. 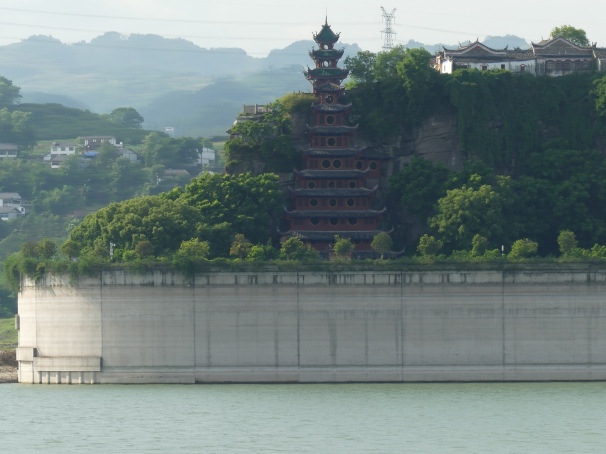 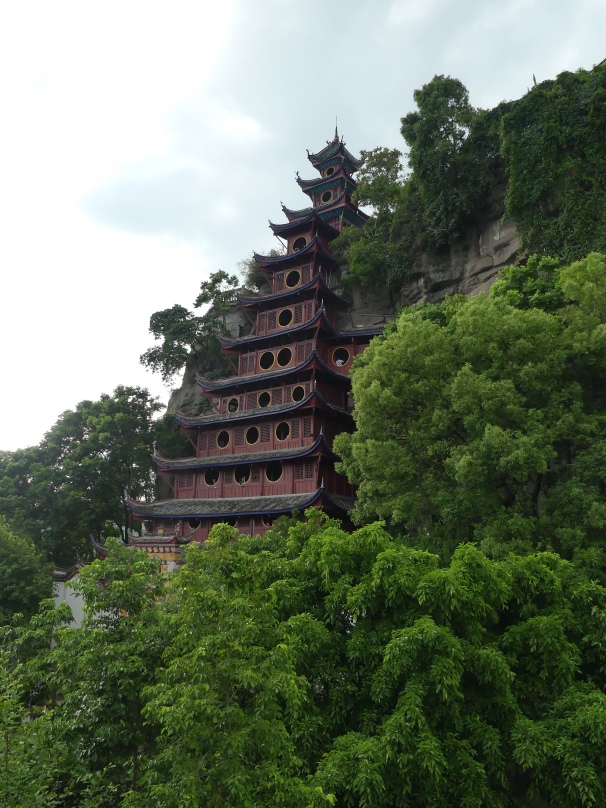 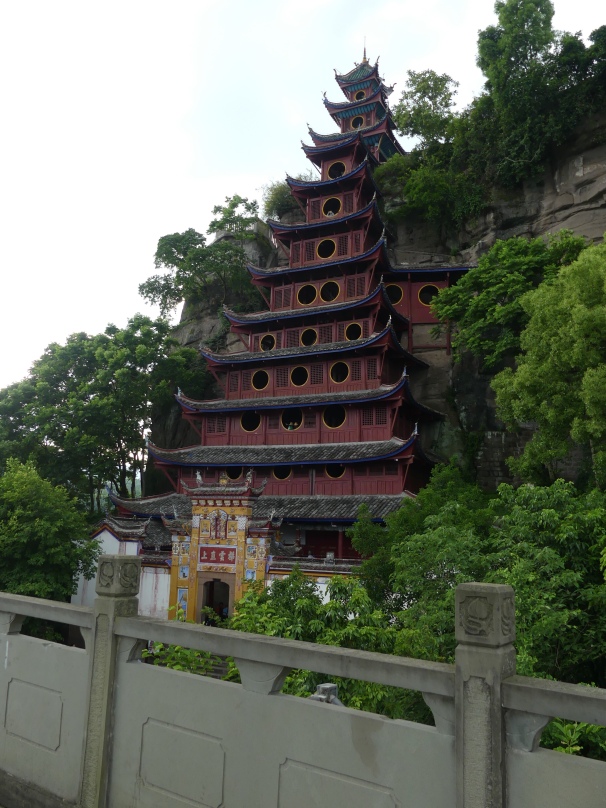 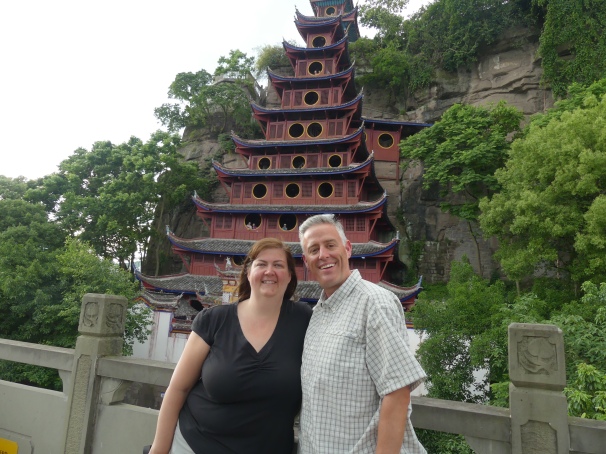 We walked 12 levels up. But our local guide gave us some info on each landing to break up the climb.

We took a ‘shortcut’ up some very steep stone steps close to the top. 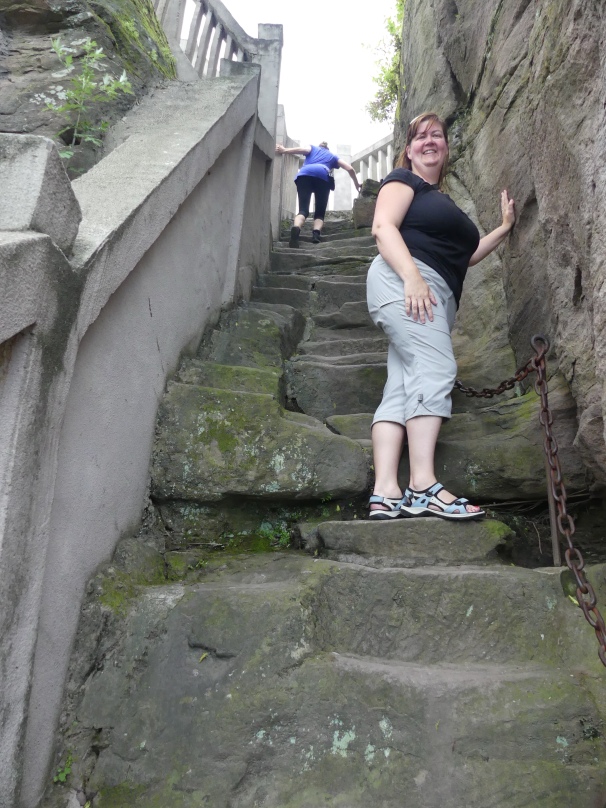 The view from the top of the pagoda was amazing. 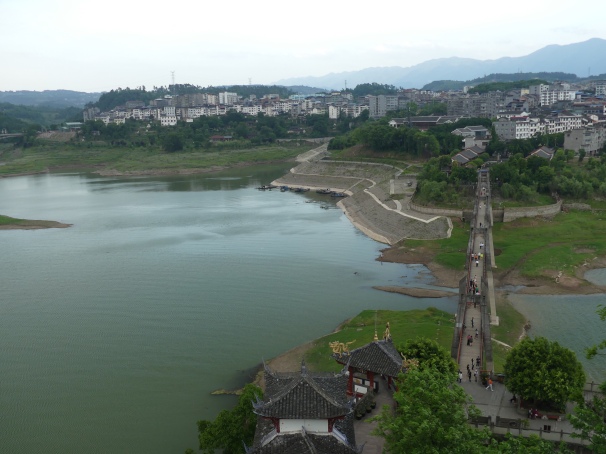 In the temple we found another Lover’s Bridge. This one was much steeper and shorter. But we made it. Apparently Kris and I good for this life and the next. Our guide said we needed to make our decision to do this carefully! We celebrate 24 years married next week, so I think we’re okay. 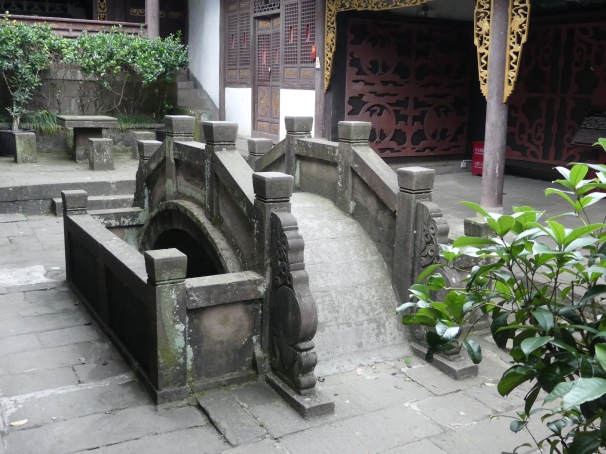 We had some free time to shop on “hello street” on the way back to the boat (so named because hello is the only English the vendors know). We like to ask our guides what the bargaining practices are. We were told no more than 50% of first asking price. Given that we are “White Rich Tourists” we know that the starting price is set even higher for us. So even with that advice we want to be on the low side. We feel that after negotiating in Egypt, all other countries are a breeze! Bargaining for a nice dragon statue, we only had to walk away once. We’ve been told a few times over the years the best thing you can bring for the locals is money. Not gifts, pencils candy etc, but buy stuff. So we do. We did see some Burberry of London scarves, funny thing is that they probably are real ones, just “fell off the factory truck” on the way to the boat. One benefit of shopping in the “factory of the world”????

Back on the boat it was nice to relax for a short bit and then enjoy dinner. Tomorrow we do more temples and see the first two of the gorges from the boat.