The boat elevator on the Three Gorges Dam is only about two years old. It’s still in a slow roll out phase so there is only one ferry line that has permission to use it. We disembarked our cruse boat for the ferry, which is really more of a very small cruise ship. We cruised about 1km, basically across the lake made by the dam, and waited our turn to ride the elevator.

The set of 5 locks on the Yangtze River takes 3 1/2 – 4 hours, 4-6 ships at a time each way. The elevator takes only 37 minutes but is limited to a maximum of 3000 tons. There was some random delay and we did wait about 2 hours. However, we had comfy seats and while a bit boring it was better than being parked in the airport all day.

The actual experience was pretty cool to do. Not many have done it so far. This is the entrance to the elevator.

View out the front. You DO NOT want to run that red light! It’s ~300′ straight down.

View off the stern before the retaining walls came up.

Walls are now up. 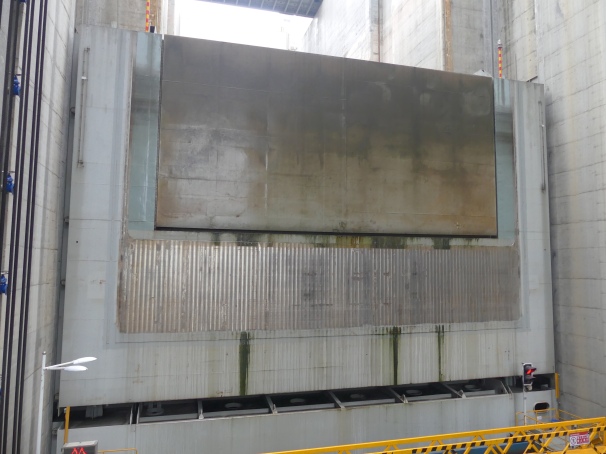 The elevator is run by a very complex set of cables, worm gears and hydraulic systems that are all synchronized by sensors and computers. Makes sense if you have a million pounds or so to lift up and down that’s as big as a football field long and half of one wide. 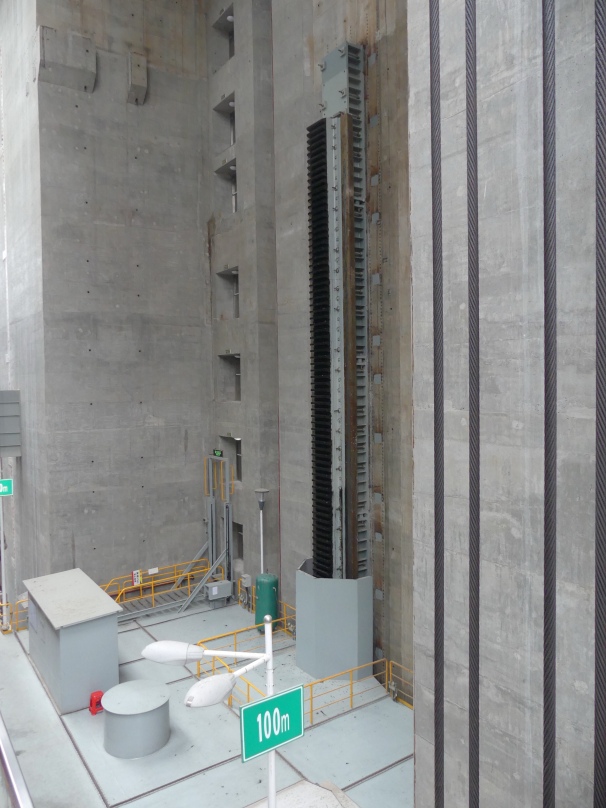 A view of the building the whole elevator is contained in. 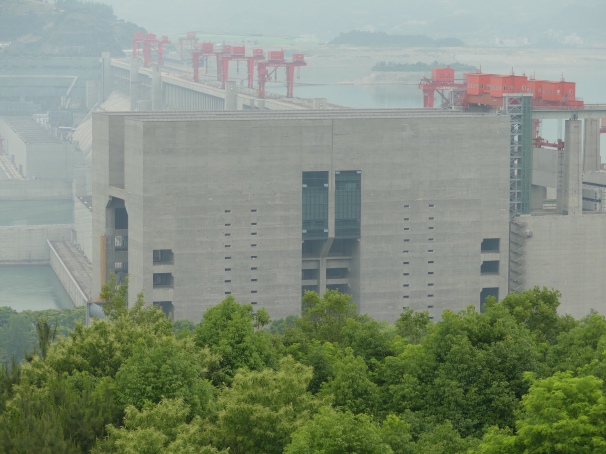 The engineer in me was pretty impressed and the little boy in me liked all the gears and moving parts.

The lock is just to the left. Two lanes, one up, one down. 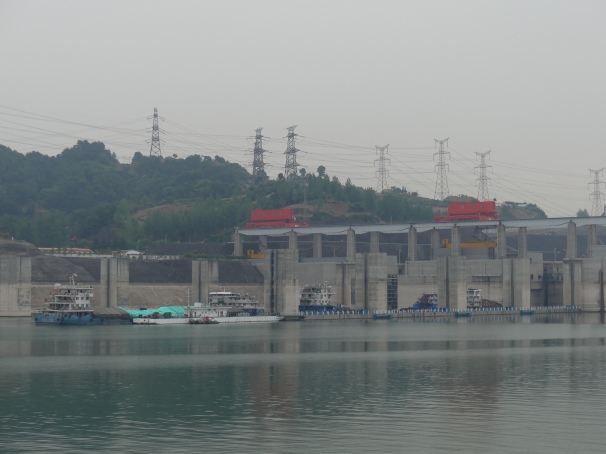 We were then taken on a tour of the dam. The whole complex is huge and has 32 power generators generating a billion watts a year. As big as it is it only generates 2% of China’s power needs. When it was built it was the world’s largest hydro electric project and took 17+ years and $28 billion to build.   55% of that cost was the actual construction and 45% was compensation for the 1.3 million displaced people. It’s 1983 meters long and 185 meters high. Benefits are the power, and the flood control that used to kill 100’s of thousands every monsoon season. Downside it that it drowned towns and archaeological sites. Oh yeah, the sturgeon were nearly wiped out too because they couldn’t migrate to spawning grounds. At least now they have breeding programs in place to bring them back. The sturgeon, not the displaced people.

This is a model of the whole project. It was impossible to get a decent photo from the ground and there are signs everywhere about no drones. Not that I have one.

While sitting and waiting for our tour group Kris was asked to pose with a Chinese group. This has happened a few times and usually they just try and sneak a photo. They think they are very subtle about it and it’s kinda funny to see them try and sneak it. They are painfully obvious. We understand we are the different ones. It is a little entertaining and only occasionally annoying.

Neither Kris nor I are feeling particularly well and the “hurry up and wait day” we are experiencing is on the wrong day. Because of the 2 hour elevator delay 3pm rolled around and we hadn’t had lunch yet so we were both nauseous and starving. We were taken to a restaurant where we woke the staff up. I guess 3pm lunches are rare. Then the food kinda sucked and we didn’t really feel super hungry so we left most of it. And to make the day super wonderful our flight was delayed an hour and half so we reached Shanghai late. We do have Priority Pass lounge access via our MasterCard and Amex which we wanted to use. It’s usually a nice space to hide out and get some quiet. I keep the two separate accounts on my phone app as I switch back and forth. At the Yichang Airport they can’t process the phone app, only the actual cards that are in my desk at home. Oh well, the trip been wonderful so far and nothing is ever perfect on a trip. We have taken our magic antibiotics and will recover soon as always.

At 11pm finally made it to Shanghai. My initial reaction is that this place has money. Makes sense given it is a major financial center.

After an 11pm room service club sandwich we crashed into bed. Tomorrow we wander the city a bit and generally take it a little easier.