Today’s breakfast was at the Capital Cafe which is a bit of an institution here apparently. There was a crowd of people waiting outside, although we didn’t have to wait too long for a seat. It’s fast and cheap(ish) and quite good. I was going to go for the macaroni option until I realized it was in some sort of soup. Didn’t look appealing. However the canned ham was good. You’d think otherwise. Kris had a Hong Kong style milk tea which may have been steeping since last night – finally tea strong enough!

We both wanted to take the Star Ferry across Kowloon Bay, so we made our way to the ferry terminal in the Wan Chai area.

Kowloon from the ferry dock. 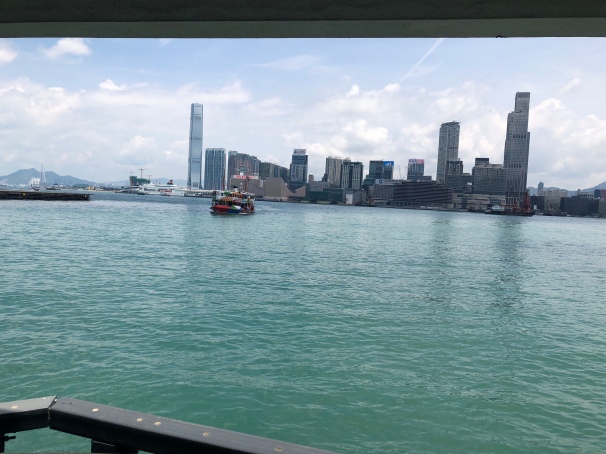 Star Ferry. We ended up on the colored one above. 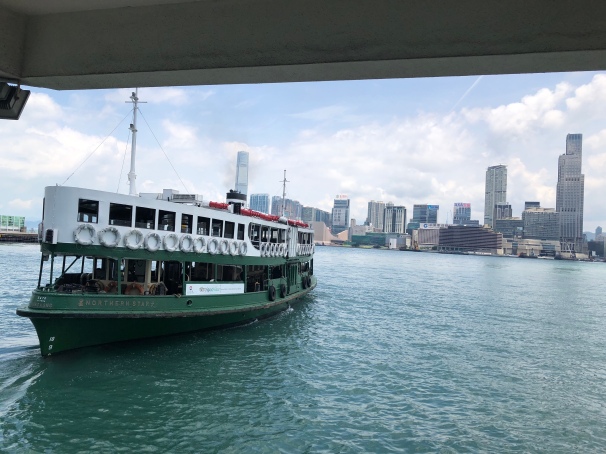 There is a sea wall like Vancouver’s and we promenaded.

Another thing I had wanted to experience in Hong Kong is the sweet buns. We picked a bakery and chose a cheese and blueberry one. MMMM. It was still kind of warm. We may have to find more of those….. 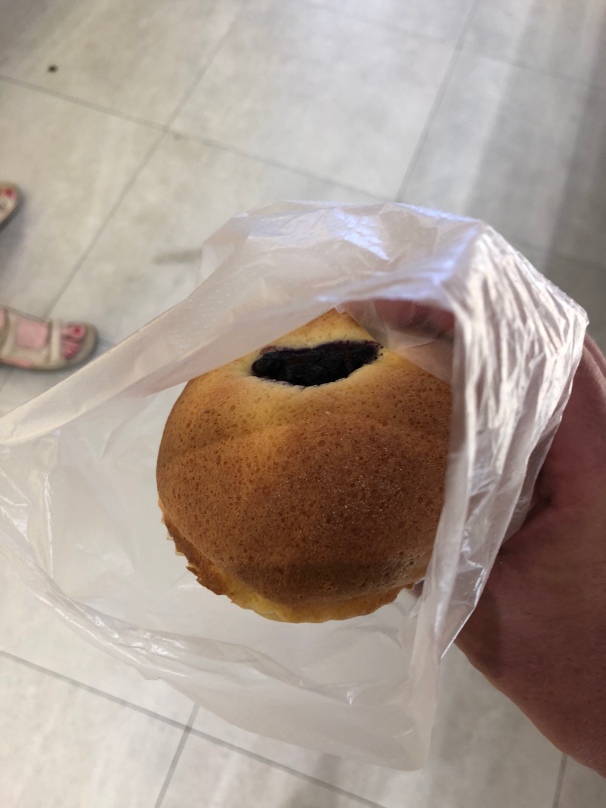 We also had the chance to have Wife Cake. It’s a round flaky pastry filled with lotus bean paste. They are sort of like a jelly doughnut but the stuffing is much firmer than jelly.

Kowloon is very beautiful and busy. Today was a hot one again – 32 C and at least 80% humidity so we had to find water regularly. The water didn’t last long either. We needed to be fresh when we got to the Ladies Market! The market is several blocks crammed full of small vendors who sell all sorts of knock-offs. Or “good quality” copies as the vendors call it. We had intended on finding a purse for Kris and a watch for a certain son of ours who has been salivating over my real one. As there are probably dozens of places that sell the exact same stuff, we knew we didn’t have to jump at the first one we found. We had asked a couple locals what the real price should be. One source said “20-30% off for me as a local but more like 50% for you”. Meaning our prices start much higher. Armed with that knowledge we started. The first store was more of an exploratory experience. I low balled in a huge way just to test the market. Ironically it was also the store with the highest starting asking price. So we were way way off in our starting prices. A few minutes in I gave up there and we moved on. I think we were still 700HKD apart (~$140 CAD), way too far. Fourth attempt in the fourth store, and a very hot 20 minutes later the vendor and I had come to a deal.

Early in the process I learned there are at least 4 levels of copies. Complete junk, junk that is cheap but won’t break before we get home, stuff I might consider for a very good price, and actually, a very solid copy of the original. You have to ask to see the latter two and only get to the 4th level stuff when you refuse the 3rd by showing you know what you’re looking at. The “Good Stuff” is never on display and you have to go deep into the stall so they can open the bottom cupboard or pull out the special drawer. The process is you work your way to your choice and only then ask prices. Curious that at the last 3 stores, the asking price was getting lower and lower. We had a budget of what we would be willing to spend on each thing prior to going in so I kept with the same starting price regardless. According to the vendors our prices were closer to level 2 copies than level 4. Except I wanted a level 4 one once I knew they existed. You know you are getting close when the negotiating gets down to increments of 10 vs 100. I only had to walk about 20′ down the alley to get him to call me back. He still wanted more but relented when I turned away “for the last time”. How many “final prices” can you have? Three for him apparently and two for me.

Kris’ fake Coach purse was a much faster negotiation but the shop lady still wasn’t happy when we were done. This vendor started much lower and since the whole price was lower, there were fewer places for each of us to increment to. I took a negotiation course a few years ago and learned a few tactics. If neither side is super happy it’s good deal. If one side is smiling, the other side got screwed. There should be some level of tension in negotiation. I must admit, I do like the negotiation part. Kind of like a sport. Egypt still reigns king of the markets though. This place is good, but Egypt is better. Here if you pay less than 50% it’s a good deal, Egypt it’s 10% of original asking.

By now it was time for beer. We found a very nice Irish pub full of ex-pats and had a Guinness and Tetley Smooth. Oh and lunch too. All in all a fun experience today. 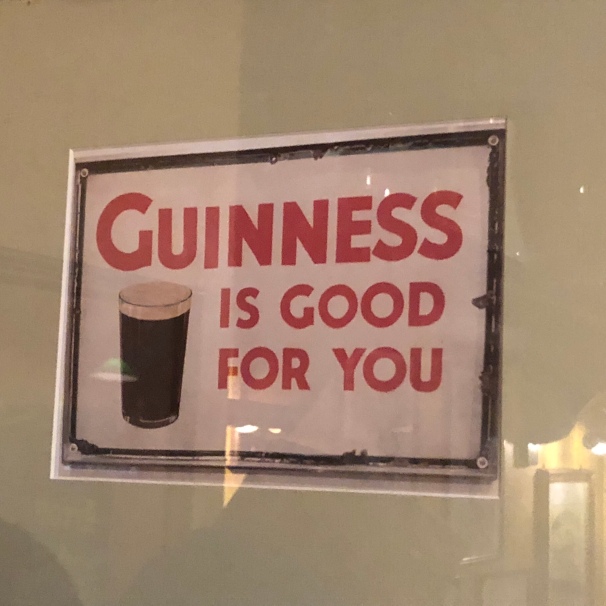 We walked back down to the harbor walk and took some Hong Kong photos. This one is an old school Junk but really a tourist booze cruise boat now. 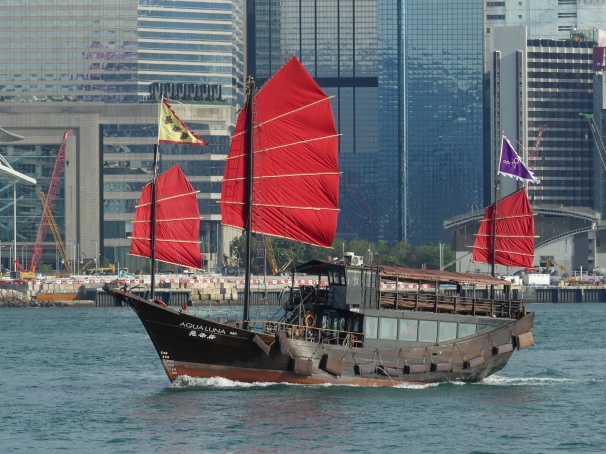 Convention Center on the left. 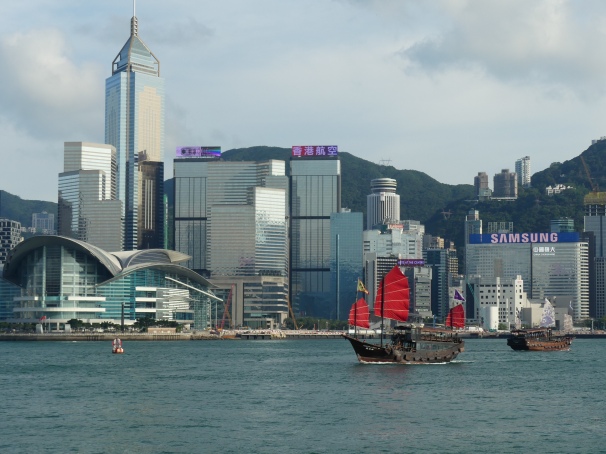 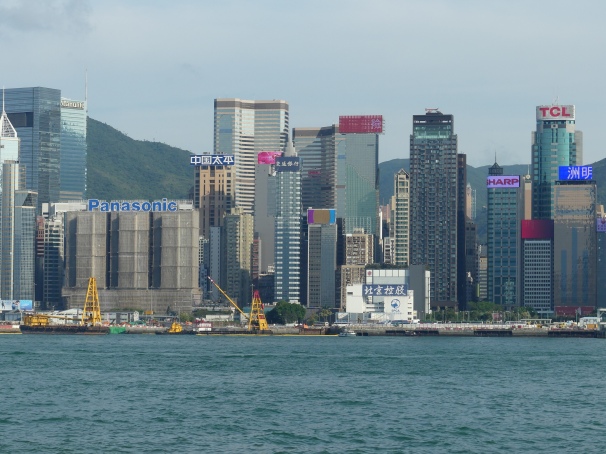 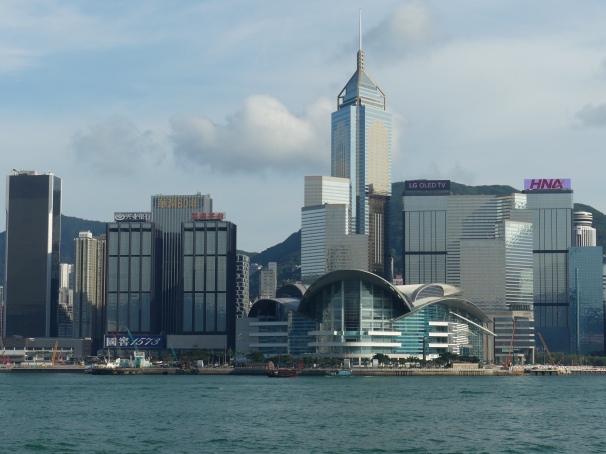 Kowloon Ferry Pier on the left of the photo below. 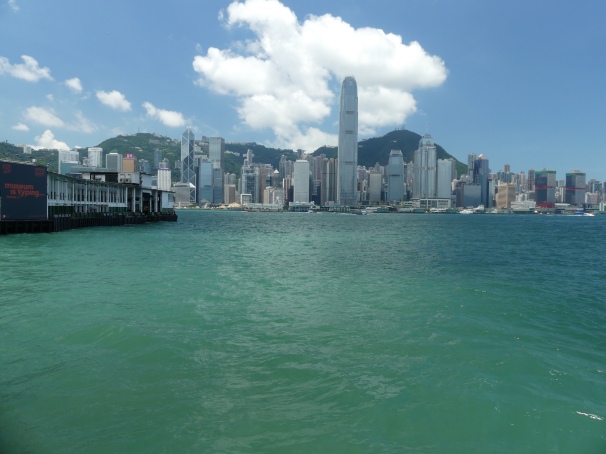 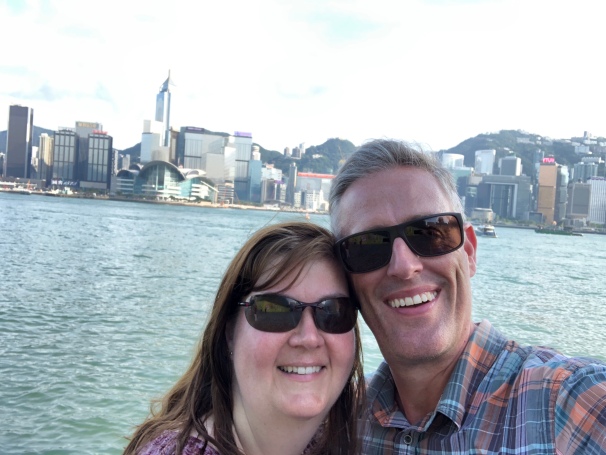 After a nice cold shower at the hotel it was time to enjoy Vietnamese food for dinner. Once again we went to the Times Square area and had very authentic food.

Tomorrow we will take a fast ferry to Macau for some old city history and maybe some gambling. Ironically I have to head to Vegas in a couple weeks so I guess I’ll see Caesar’s Palace twice in short order.