This morning we said good bye to the Isalo Rock Lodge and the amazing scenery of Isalo. It was a short 30 minute drive to our first stop in Ilakaka. This is one place in Madagascar where sapphires and other precious stones can still be found on the river shores. Although most are now found in open pit mines. We spoke with one shop owner who was Swiss. He told us that blue sapphires are mostly found in the north of the country and that he didn’t have more that what was on display (which was not much and mostly very small). They were both very very over priced and not what we are looking for. We’re not sure if we can negotiate down or take list in a store like that, but his prices are at least 2x the price of sapphires in Vancouver. We were thinking they’d be cheaper over here. He did give us the name of a retailer in Tana who might get some of his stones from the north. We will look again when back in Tana.

Another 30 minutes later we stopped at Zombitse-Vohibasia park. We had a nice easy 2 hour hike looking for lemurs. Our guide was a nice young woman named Angela, whose English was heavily accented but very good. At least some of the girls in this country get to go to school.

One of the first things we saw were beautiful yellow and brown butterflies that were about the size of my palm. They didn’t land much or pose for photos, but we saw one drinking nectar out of some pretty pink flowers. 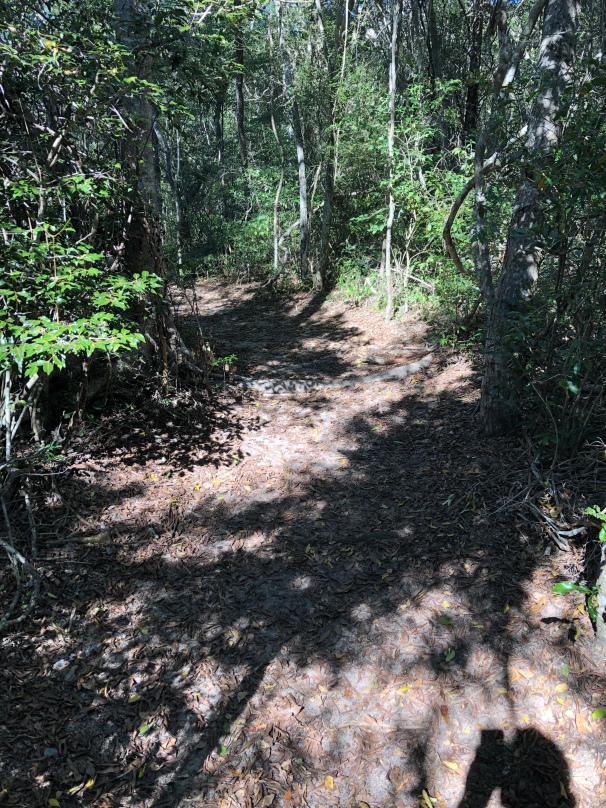 We got lucky and found the nocturnal Sportive Lemur hanging out in a tree hole for the day. She feeds on the ground during the night and sleeps in protected tree holes during the day. It was lucky to see her before she slipped inside for her nap. 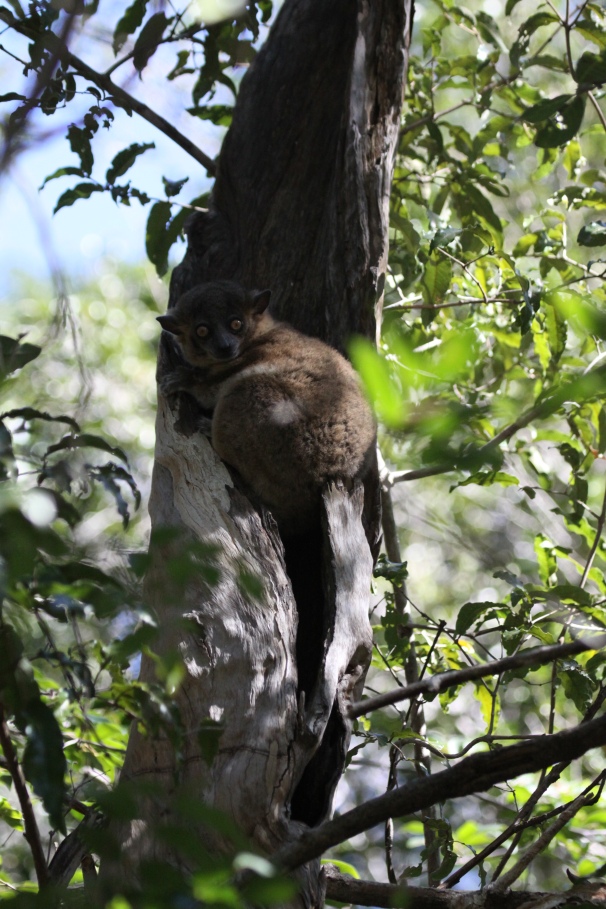 A few minutes later we found another sleeping spot. This time with a pair.

There are Verreaux Sifaka here as well. Our spotter/guide team worked very hard to find the family group that should be here. We could tell they were getting desperate as we walked around the pretty forest. You know your guide is filling in time when they talk about plants or bugs.

However at least one plant here is pretty amazing. This was our first time seeing a Baobob Tree. There are male and female trees. This one is male and about 800 years old. Due the dense forest we couldn’t really get the whole tree in one shot.

Our spotter finally came back visibly excited. He’d found the Sifaka. A family group of 8 – about as big as their conspiracies get. 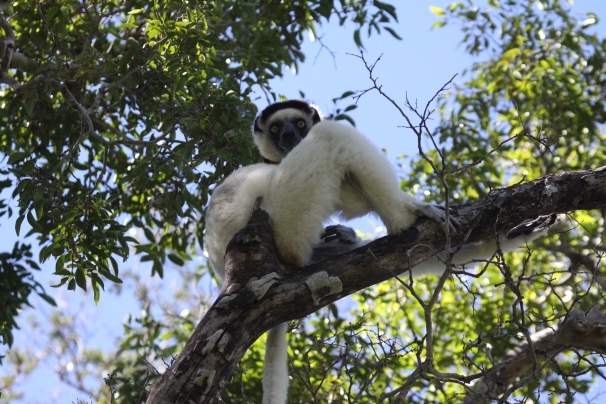 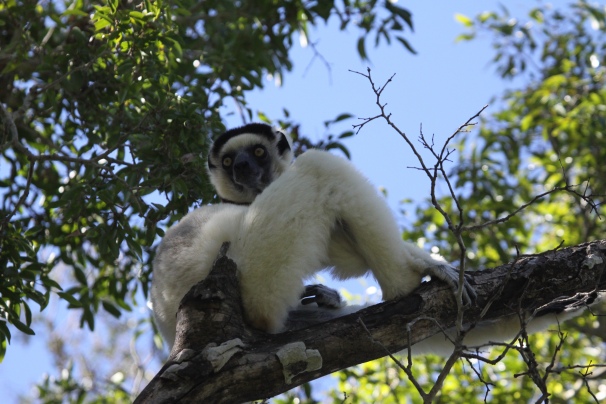 After our walk we continued on to Toliara (Tulear in French), a coastal city a stone’s throw from the Tropic of Cancer (the tropic is at 23.5 degrees latitude, we are at 23.35 here at our hotel). We will overnight, then say goodbye to Carl and fly back to Tana so we can then fly out to Morondava. We passed the airport on our way in, it’s not a huge place. I can see why there is no Toliara-Morondava flight. There can’t be enough volume. So in and out of Tana we go. This is why we are here for almost a month. It takes time to get places, either by road or air. By the way, driving would take us about another 15+ hours. Overnighting in Tana seems way more sane.

On our way along the road we passed a few interesting things. First was a grasshopper / cricket migration. Somewhat biblical really. We could see clouds of them rolling over the hills. Those aren’t birds in the photo and video below. They were bumping into the car (we had to close the windows) and we crunched over them on the road. I can totally see why such migrations in biblical times freaked everybody out. It was eerie.

Of course, the local villages catch the crickets and either eat them or sell them. I can imagine just standing with a butterfly net today would yield about a year’s worth!

Then very differently – a rum ‘factory’ on the side of the road in a small village. Made from sugarcane by hand of course. This is just the base fermenting part. Alcohol kills germs right? 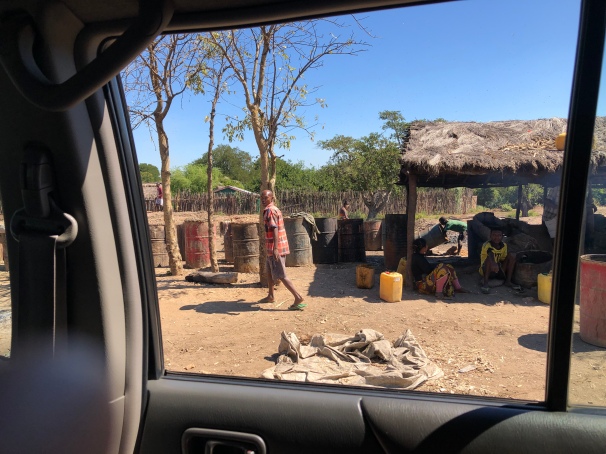 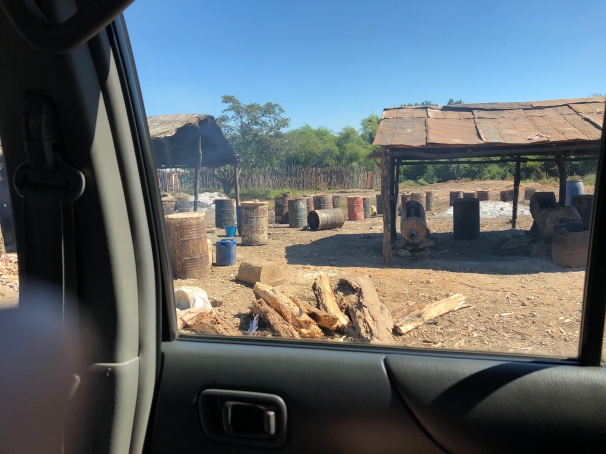 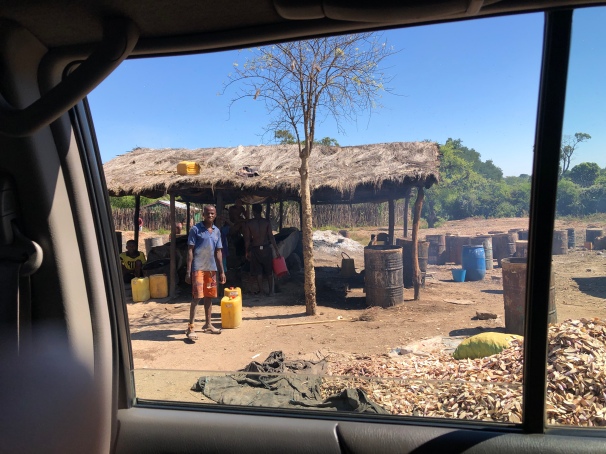 As well as that we saw bush fires a few times – mostly small low-grade fires in the fields. It seems there is no infrastructure to do anything about it. No phone number to call to report forest fires, and no Smoky the Bear showing up to put them out. Probably a good thing as it’s part of nature. Just looks a little weird driving by burning grass on the side of the road with no one really caring much.

We also saw cotton being grown. Ready to harvest we think. 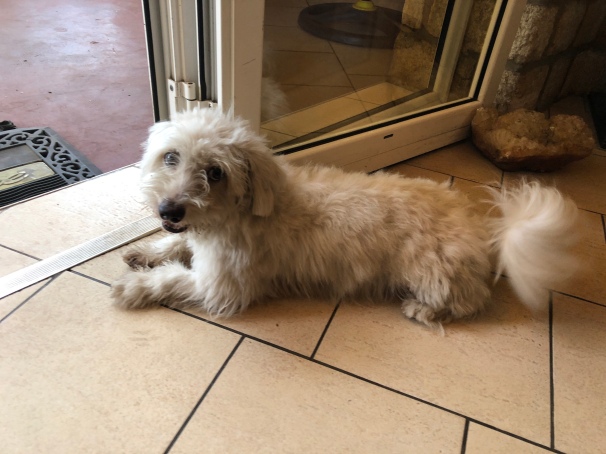 Without being shaved down you could see how ‘cotton ball’ would come to mind. The hotel also has a ‘pet’ Ringtail lemur. He apparently escaped his cage and came over when we were in the pool and licked Kris’ arm. More close encounters with the ‘wildlife’. The pool from our room.

Our monstrous room. Maybe not as nice as our last place but still nice! It was 35° when we arrived so that pool and AC were very welcome. 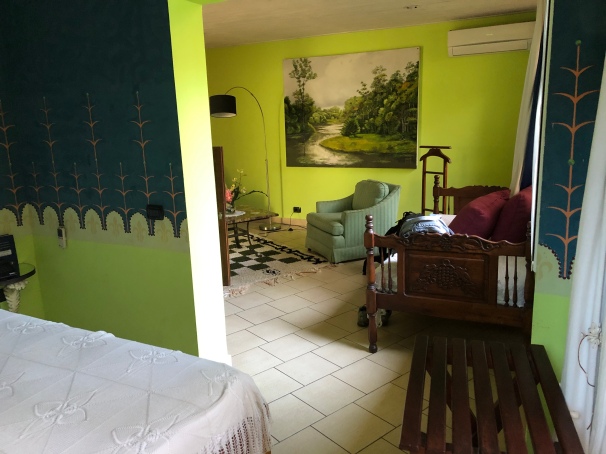 Our hotel is right on the beach. Not much of one but at least you can walk out and see the ocean. I think the guy in the shots is actually using the hotel WiFi without them knowing. 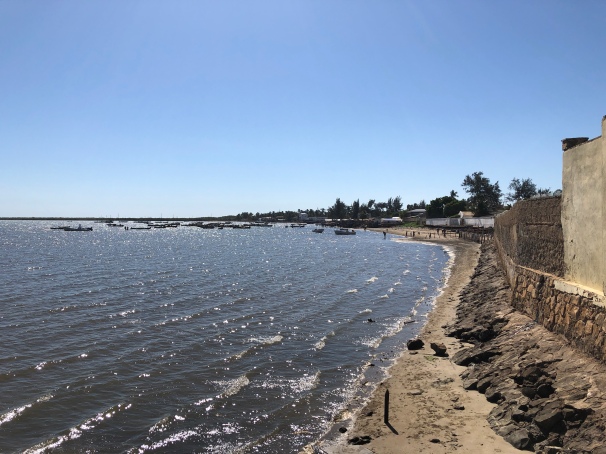 For dinner, we did venture out to a restaurant owned by a German about 1km away. We decided we could walk there and if need be get a “pousse -pousse” back (a bicycle tuk tuk or pedi cab depending on your country). As in Tana, we felt totally safe walking there even with the stoned guy professing his love for Kris. We simply walked with purpose and ignored him. Blu Bar is a restaurant with the front part right on the beach. Sand floors and everything. Great vibe and good food. The proprietor came up and said he’d translate for us, he’s a bit of a showman sort. Dave asked for some Dzama amber rum and he said he had a better option. Aged 12-15 years in sherry barrels and then brought to market it old gallon containers or jugs. Known as Vieux (old). It was amazing. It may have been made at the roadside factory we saw earlier today. It is local stuff after all. Nice meal and worth the trip over. Next time you are in Tulear you should drop in for a drink.

We decided, since we walked over, we should experience the pousse-pousse on the return trip (it is really dark after sunset). Like any good city (Vancouver excepted) finding a “cab” is a simple affair. We didn’t even make it 3 feet onto the sidewalk before being offered. 10 000 MGA later we are back at the hotel. Kris had left over pizza which she asked if the driver would like. We think he liked the pizza more than the money. We got a big smile for the donation!

Tomorrow we fly back to Tana in a small(er) plane. Madagisakar (not a typo) airlines, per their web site, flies Beechcraft twin turbo props and small regional jets. Dave tried to check in on line but no option. We shall see what we fly in. Kris shall take her air-sick pill!