Our final breakfast at this fabulous hotel was a buffet but a larger tour that was there ahead of us had cleaned it out. The staff were able to restock somewhat. After breakfast we embarked on our 6 hour drive to Kirindy.

The roads were busy today and the stream-fording provided some entertainment as one car got stuck. We saw it draining and blowing water out of it’s exhaust as we passed by. Dave heard our exhaust burble underwater and we were a bit concerned that water would come pouring through the doors – it was that deep.

We learned that our driver, Miffy, is every bit as crazy as Carl was. He overtook the cars ahead with a driving passion, honking and gesturing as he came up on their bumpers. But most of it was for naught, as he stopped twice for a cigarette and everyone passed us again. Whatever, it’s not a race. 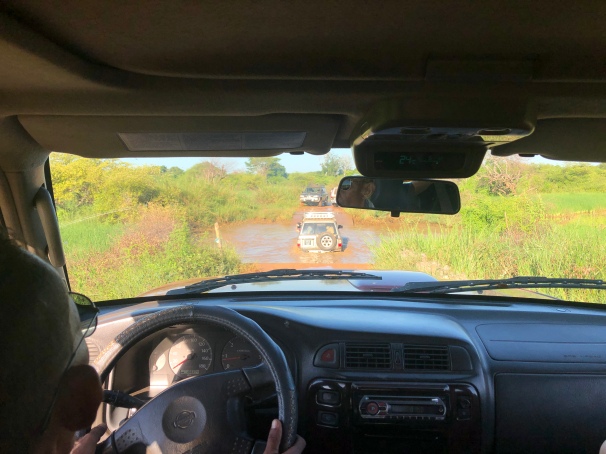 We stopped for lunch at the Mad Zebu in Belo sur Tsiribihina again. We love the little hats they have to keep the flies out of your bottles after opening.

AS we have run out of mobile data, we were hoping to find an Orange Mobile kiosk to reload. The larger store seemed to be open when we pulled into town but we didn’t know they close from 12-2 (for siesta?). We arrived into town about 1155 and after lunch (1245) we were too late. Oh well. We’ll have wifi in Kirindy right? True but so painfully slow we can’t upload anything. Dave did some trouble-shooting on their network, but couldn’t make it work well.

Just after lunch we crossed the Tsiribihina river again. 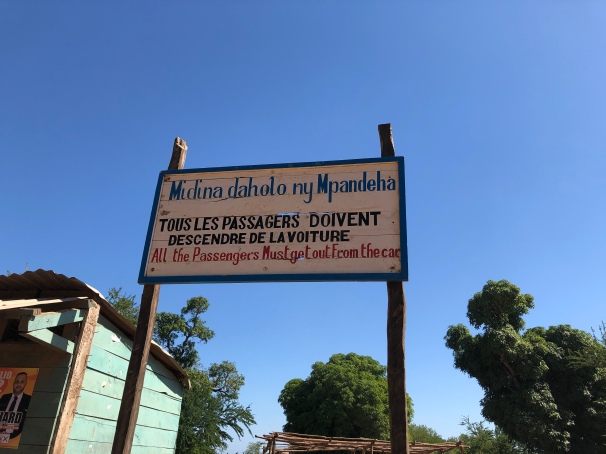 This little guy at the ferry port really wanted his photo taken. So we had to oblige.

One of the boys who appeared about 10 asked repeatedly for our water bottle. We know these are prized. There was very little water left in it so we tossed it to him. Wow he was happy. Like he’d won a lottery. Sad that things we place absolutely no value in at home suddenly have massive value to others here. Empty water bottles are reused for a plethora of things – more water, milk, juice, home brew rum, honey, gasoline/diesel. It almost makes me feel less guilty about using plastic water bottles here, when you see how they are coveted by the villagers.

Going upstream this time meant the ride was quite a bit longer. Over an hour in the sun. Just like BC Ferries you can ride in your car. Except there is no upper decks, just a big bunch of logs on two steel pontoons. It is another scorching day today (I think the thermostat in the car read 35 degrees) and there is no cover from the sun on the bow of the ferry. We are feeling a bit crispy this afternoon.

Our side had some hand luggage. A bag of produce (more spinach) and bread and another bag full of dried shrimp. 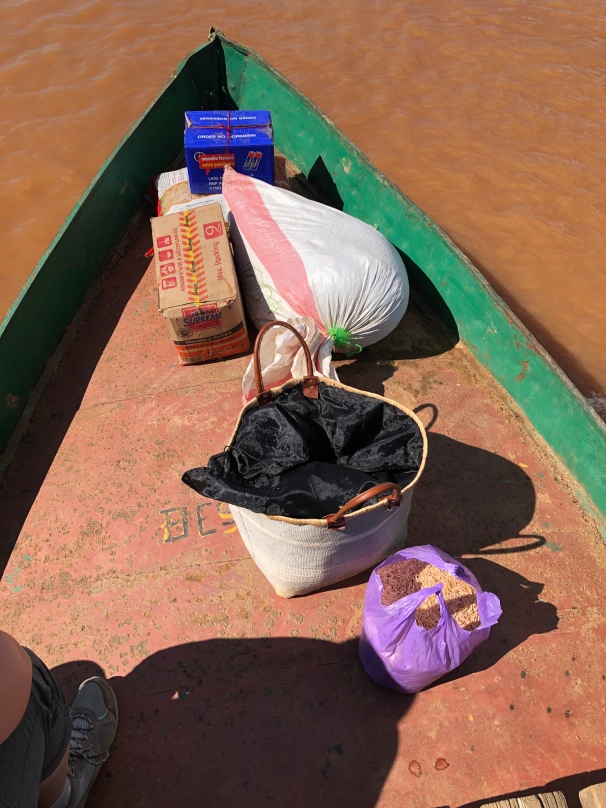 One of the ferries had a great name. It’s not the one we rode, but was moored at the dock. We’re glad that someone approves of the Vazaha! 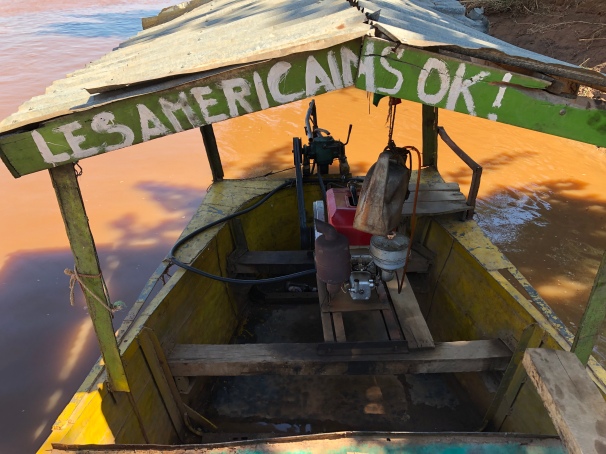 Just upstream a bunch of buff guys were hand loading a freight barge with very heavy looking rocks for construction. Each rock looked to weigh 40-50 pounds. 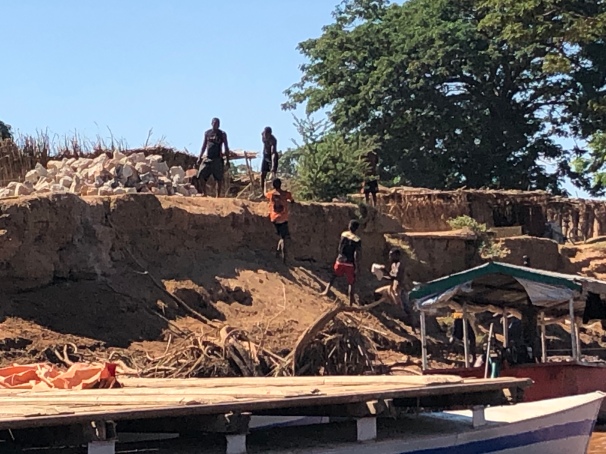 The view up river.

I did manage to get a good shot of the old mechanical Diesel engines. Slow rpm and I’m sure reliable as they have a hard life but seem to crank to life pretty quickly. The driveshaft runs a wheel that has a 6′ fan belt and then some gear system to get it to the props. You can see the rudder just poking about the water.

Once on the other side of the river the road got somewhat better. Meaning just washboard and the occasional big dip. No more streams to ford.

We passed by some Mahafely tombs on the way. They are painted and decorated to show the life of the occupant. Some are more fancy than others.

We finally did arrive in Kirindy at our hotel for the night. Rooms have these signs to point the way. We were greeted with a glass of baobab juice – we didn’t even know baobabs have fruit, let alone that you can make juice out of them. It was thick and sweet and tasted faintly like guava. Miffy says that the hotel puts lots of sugar in it! 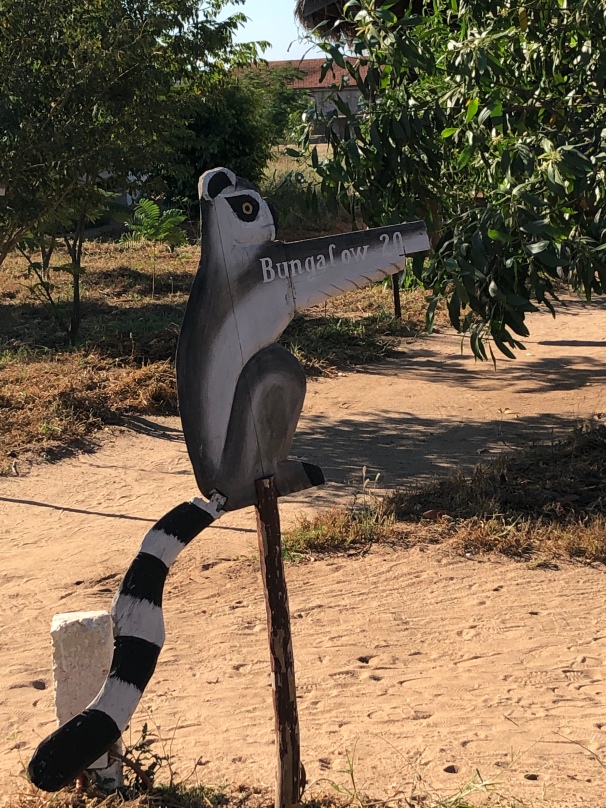 We are right across the street from a 1500 year old ‘sacred’ Baobob tree. The locals use it as a prayer tree (and swear that more often than not, their wishes are granted!). 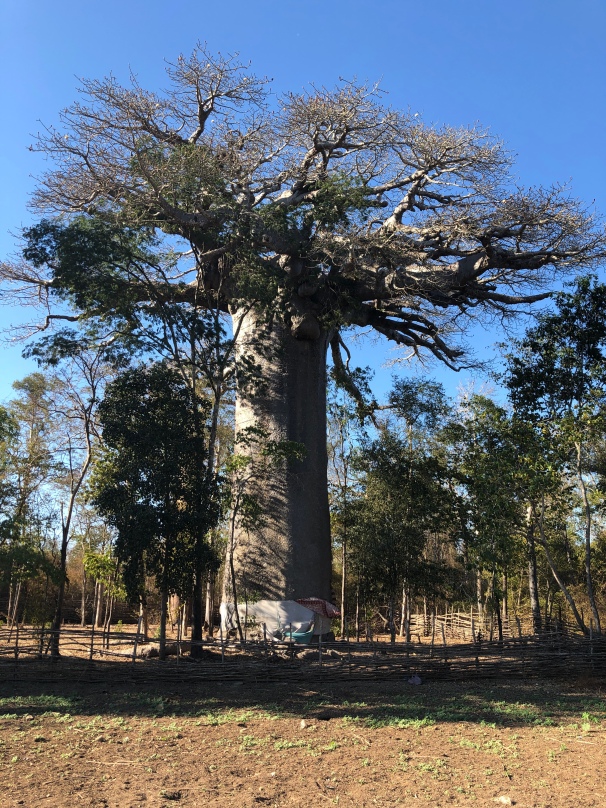 It must have been 30′ in circumference. Not super tall, maybe 60′ but very solid. There were a ton of kids playing nearby. As we were taking photos they wanted to interact with us. One little girl came up to Dave and (he thought) wanted to high five with both hands (high ten?). Turns out she wanted to play a game of patty cake. Kris got her turn too.

Then it was time to twirl apparently. They all wanted their turn! 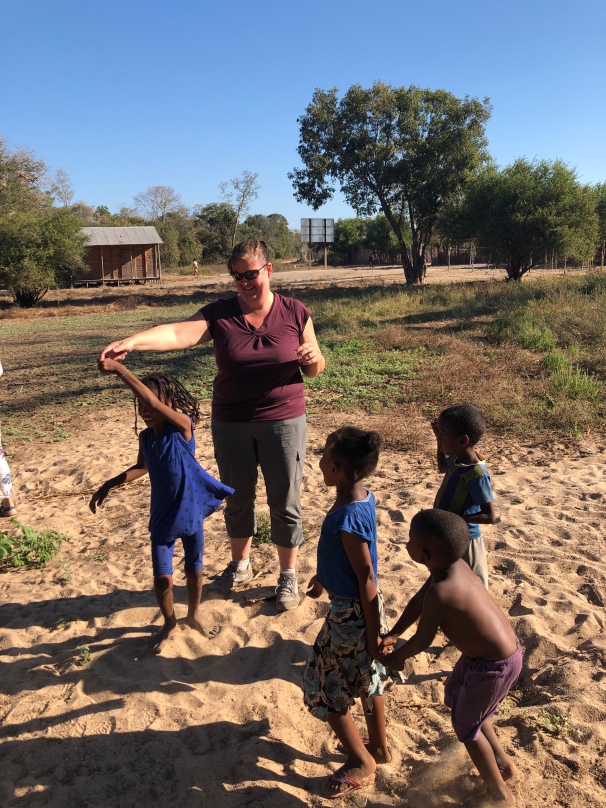 We headed back to our bungalow.

That fence in the background is the main route to and from Morondava and the Tsingy. Kinda like a Motel 6 on the side of the highway. Just rural.

We had passed the pool and the French proprietoress made one of the staff start cleaning it (there were a few leaves due to the wind). We felt obligated to use it. It was nice even if a little guilt ridden.

We were the only guests here at that point. So dinner was a little awkward. The very slow wifi is only available in the reception/bar/restaurant area so we wanted to see if we could upload yesterday’s blog yet. No such luck. However our timing was good as they asked if they could take our dinner order. Remember we are the only guests and there had to be about 15 staff on duty. Including 8 or so in the restaurant. Food however was great. We heard them preparing it as we sat and waited. Before we were almost done another couple did show up. They looked even more weary than we did. None of us will sleep well tonight as the village here is having some sort of very loud celebration. We are assuming lots of local rum is being consumed as the drunks can be heard quite clearly in our room. We hope they enjoyed themselves. We will try the ear plugs again tonight.

Tomorrow we head back into Morondava. We did manage to get a reservation at a different hotel (and cancel the noisy one) so hopefully a much more quiet stay. We think we will need the sleep! We also should be able to get to a bank to get more cash and just as importantly more internet data.